Washington: The Justice Department on Thursday announced the indictment of seven Russian military spies on cyber hacking charges linked to the leaking of Olympic athletes' drug test data in an alleged effort to undermine international efforts to expose Russian doping.

Four of the GRU officers also were charged with targeting organisation probing Russia's alleged use of chemical weapons, including the poisoning of a former Russian spy in Britain.

Three were indicted in July for allegedly conspiring to interfere in the 2016 presidential election. 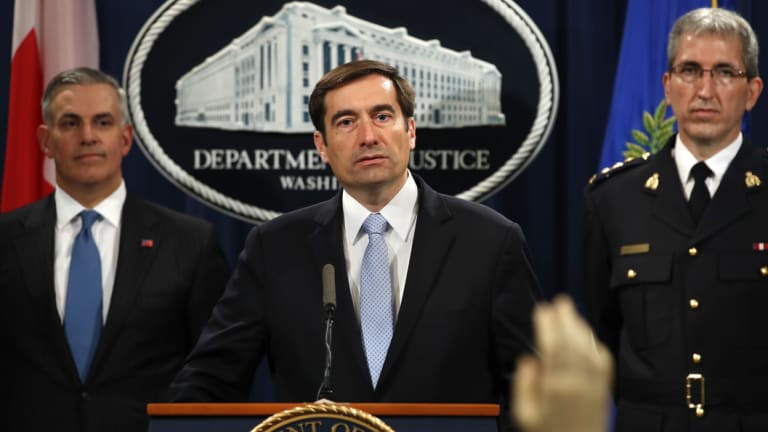 The indictment further exposes Moscow's ongoing, widespread campaign to discredit western democracy and international institutions through disinformation and other measures. The aim, officials said, is to muddy or alter perceptions of the truth.

In July, special counsel Robert Mueller obtained an indictment of 12 GRU members for hacking and leaking emails of Democratic officials and organisations. In February, as part of Mueller's probe of Kremlin interference in the election, officials announced an indictment of more than a dozen Russian "trolls" who spread information online and of several operatives who travelled to the United States and posed as Americans to whip up protests and stoke political divisions.

In 2016, the GRU hacked drug-test results from a World Anti-Doping Agency data and posted confidential information about US Olympic athletes including tennis stars Serena and Venus Williams and gold medal gymnast Simone Biles. WADA publicly called out the Russian military agency for the information operation.

Now, the US government is seeking to apply the law to the cyber spies.

"We want the hundreds of victims of these Russian hackers to know that we will do everything we can to hold these criminals accountable for their crimes," said Scott Brady, US Attorney for the Western District of Pennsylvania, where the grand jury indicted the Russians.

"It is evident from the allegations in today's indictment that the defendants believed that they could use their perceived anonymity to act with impunity, in their own countries and on territories of other sovereign nations, to undermine international institutions to distract from their government's own malfeasance," said John Demers, Assistant Attorney General for National Security.

The GRU campaign ran from December 2014 until at least May 2018, targeting US persons, corporations and international organisations based on their strategic interest to the Russian government, officials said.

In July 2016 WADA released a report describing Russia's systematic subversion of the drug testing process before, during and after the 2014 Sochi Winter Olympics. As a result, 111 Russian athletes were banned from the 2016 Summer Olympics in Rio de Janeiro. The International Paralympic Committee imposed a blanket ban on Russian athletes in its 2016 games.

Days after WADA released its report, the officers prepared to hack the networks of WADA and the United States Anti-Doping Agency (USASA) among others from Russia, the indictment alleges.

Apparently unsuccessful in the effort from afar, two of the GRU spies flew to Rio to hack the Wi-Fi networks used by anti-doping officials in their hotels and elsewhere, officials said. They succeeded in stealing the log-in and password for one US Anti-Doping Agency official's email account, obtaining summaries of test results and prescribed medications, they said.

In September, they flew to Lausanne, Switzerland, where WADA was hosting a conference at a hotel, and managed to steal the credentials of an official with the Canadian Centre for Ethics in Sport by hacking the hotel Wi-Fi. Other GRU spies then used the log-in and password to compromise the anti-doping agency's networks in Canada.

Using social media accounts and other computer sites operated by GRU Unit 74455 in Russia – one of two units implicated in July for interfering in the 2016 election, the cyber spies posed online selected items, posing as a hacktivist group calling itself the "Fancy Bears' Hack Team".

Fancy Bear is a nickname for a GRU hacking group.

They leaked medical information and emails stolen from officials from 40 anti-doping and sporting organisations. In some instances, WADA documents were altered, officials said. In all, the GRU spies leaked private data of 250 athletes from almost 30 countries, officials said.

As part of its disinformation effort, the operatives in some cases paired the leaks with posts and comments that parroted themes used by the Russian government to push back against the anti-doping agencies' findings, officials said. Between 2016 and 2018 they also exchanged emails and private messages with some 186 reporters "in an apparent attempt to amplify the exposure and effect of their message," the Justice Department said in a news release.

"I also hope that responsible members of the international news media will cast a suspecting eye on future 'hack and leak' operations which seek in part to manipulate stories in furtherance of Russian state interests," Demers said.

Four of those charged belong to GRU Unit 26165, which was the other team implicated in the July indictment. They are Aleksei Morenets, 41; Evgenii Serebriakov, 37; Ivan Yermakov, 32; Artem Malyshev, 30; Dmitriy Badin, 27. Also charged were Oleg Sotnikov, 46, and Alexey Minin, 46.

They were charged with conspiracy to commit computer fraud and abuse, wire fraud and money laundering.

In April, Morenets, Serebriakov, Sotnikov and Minin, travelled on diplomatic passports to The Hague in the Netherlands to target the computers of the Organisation for the Prohibition of Chemical Weapons through Wi-Fi connections.

The four intended to fly from there to Switzerland to target the Spiez Swiss Chemical Laboratory, which was analysing military nerve agents, including the Novichok chemical agent that Britain said was used to poison former GRU officer Sergei Skripal in Salisbury, England in March.

But the Dutch defence intelligence service disrupted their hacking operation, and arrested them, officials said. The Russians left behind their rental car. In the trunk, officials said, were Wi-Fi hacking tools.

Britain's Foreign Office on Thursday said that Russian military intelligence was behind six separate cyber attacks between mid-2015 and October 2017. Four of the attacks were newly attributed on Thursday. Although some were high-profile and obviously political, including the hacking of the Democratic National Committee, others ranged across business and media life.

Britain accused the GRU of hacking email accounts at a "small UK-based TV station," stealing their contents. It blamed Russia for the theft and subsequent release of confidential athletes' medical files from the World Anti-Doping Agency. And it said Russia was behind the October 2017 BadRabbit ransomware attack that rendered computer systems inoperable in Ukraine and at the Russian central bank.