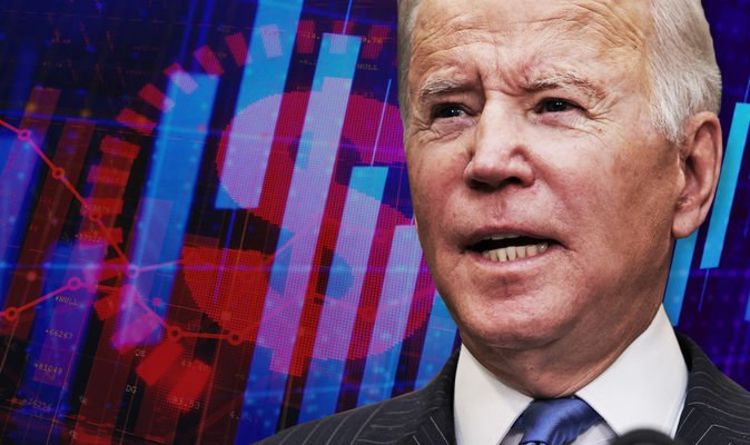 Inflation has been driven largely by surging prices for used cars and food. Standing in an emptying supermarket earlier this week, one US man told Fox News: “It’s like a Soviet store during 1981. It’s horrible.” President Biden has acknowledged there is “more work to do” in order to resolve the issue.

The US consumer-price index (CPI), a measure of what people pay for goods and services, rose to seven percent in December from the same month in 2020, according to the Labor Department.

In November, the figure stood at 6.8 percent.

December marked the third month in a row in which inflation exceeded six percent.

Accusing Mr Biden of irresponsible and “massive spending”, he told Newsman: “One of Joe Biden’s central promises was that he would not tax people who make less than $400,000. But inflation is a tax…

The President’s approval ratings have fallen amid reports of worsening inflation.

Federal Reserve Chair Jerome Powell said on Tuesday that the US central bank was prepared to do what was needed to prevent high rates from becoming “entrenched”.

Interest rates could be raised from as early as March, according to reports.

This, according to some, is not so much a matter of choice for the Fed but a fold fact of reality.

Chris Zaccarelli, Chief Investment Officer at Independent Advisor Alliance in Charlotte, Carolina, warned that this process may have to be repeated on a number of occasions over the coming years.

He, quoted in Reuters, said: “The Fed is going to be forced to begin raising rates in March.

“Depending on the political pressure on them – from both sides of the aisle – they are going to have to raise rates four or more times in this year and potentially more than that next year.”

The White House said it was working on lowering inflation but conceded that efforts are far from over.

Mr Biden insisted: “We are making progress in slowing the rate of price increases.

“At the same time, this report [from the Labor Department] underscores that we still have more work to do.”