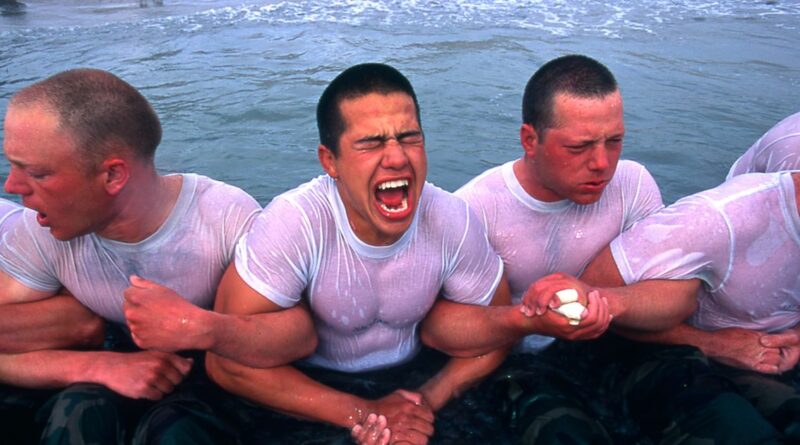 It's no secret that becoming a Navy SEAL takes determination, hard work and other-worldly physical endurance.

Those hoping to join the force's elite ranks have to prove themselves by running hundreds of miles on little sleep or water, doing sit-ups while holding heavy logs, and lying down in shallow seawater as the salt stings their eyes.

Arguably the toughest test candidates face is the notorious Hell Week, which is known to force 75 per cent of prospective soldiers to drop out.

The brutal gauntlet, traditionally held during the third week of the first phase of the training regime, is designed to weed out those who aren't cut out to be a SEAL.

However, the controversial regime has come under fire for an alleged lack of oversight, after Yale grad Kyle Mullen, 24, died mere days after completing Hell Week. His death is currently under investigation.

The official Navy SEALs website describes Hell Week as "five 1/2 days of cold, wet, brutally difficult operational training on fewer than four hours sleep" and is supposed to test "pain and cold tolerance, teamwork, attitude, and your ability to perform work under high physical and mental stress, and sleep deprivation."

"Above all, it tests determination and desire," the website adds.

Students are expected to run over 200 miles during the course of Hell Week, often with boats on their heads, and are also expected to swim, perform hours of exercise with logs – all while constantly being wet and cold.

Candidates are fed regularly and are said to consume over 8,000 calories a day but still lose weight. Some of the training exercises run during Hell Week have been around since World War II.

One former SEAL told Insider Hell Week was so intense his class of 150 students was whittled down to 24 by the end of Hell Week, by which point some of them "were pretty beat up".

The week kicks off with students moving into tents, after which "wolf packs" of instructors fire off thousands of machine gun rounds to spook the students.

Infamously, students are regularly subjected to "surf torture", which involves men lying side by side in shallow wave as for minutes at a time.

A number of impromptu events are also thrown at candidates throughout the week, including Around the World (a 12-hour boat race in which the winning team is awarded the privilege of sleep) and Mud Flats (a 15-hour gauntlet of exercise in mud so thick it invades every pore of candidates' bodies).

In some instances, students are known to lose their hair from carrying heavy rubber boats on their head during miles-long runs.

During the first phase of training, students are given a white shirt, but after finishing Hell Week they graduate to a coveted brown shirt – proof they have conquered the brutal gauntlet of training.