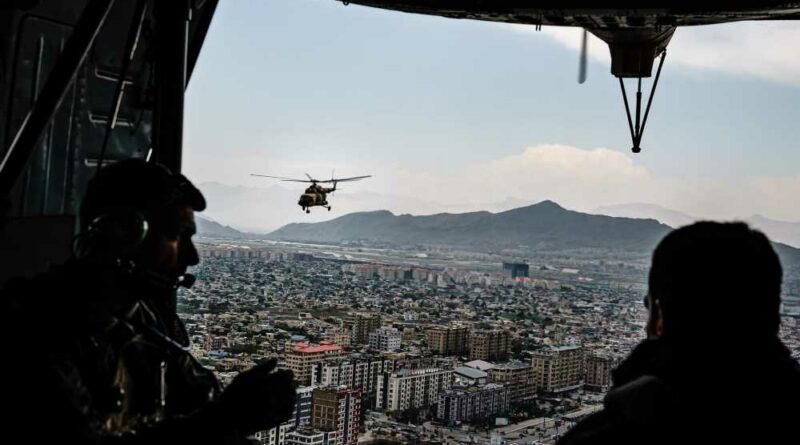 Does President ‘Happy Questions’ Biden know what a press conference is for?

US hands Bagram Airfield to Afghans after nearly 20 years

The departure of US troops from Afghanistan raises fears of far-reaching retribution by the Taliban — including the reversal of hard-won women’s rights and the murders of anyone who sided with America.

On Friday, the US military turned over control of Bagram Airfield — its main base, about an hour away from the capital of Kabul — to the Afghan National Security and Defense Force, two officials told The Associated Press.

Although the Pentagon has refused to say when the last US soldier will leave Afghanistan, the withdrawal from Bagram Airfield suggests that most of the remaining troops — estimated at between 2,500 and 3,500 — will be gone before Sept. 11, ahead of the deadline President Biden set in April.

But the end of America’s “forever war” raises troubling questions about the future of the Afghan people amid the enduring power of the Taliban, which let the late al Qaeda terror fiend Osama bin Laden set up shop in the country — and which called Friday’s development a “positive step.”

These are some of the Afghans with the most to lose:

Before the US invasion ended the Taliban’s 15-year reign of terror, Afghans were subjected to an extremely harsh version of Islamic Sharia law.

Women were forced to cover themselves from head to toe in garments called “burqas” and were barred from working outside their homes and couldn’t be seen in public unless accompanied by their husbands or other close male relatives.

Girls couldn’t attend school and females of all ages had extremely limited access to medical care.

Those restrictions remain in the areas of the country still controlled by the Taliban but elsewhere, more than 3.3 million girls are being educated and women have become doctors, lawyers, judges, teachers and other professionals, as well as business owners, politicians and members of the police and military, according to Amnesty International.

In May, the group’s Asia-Pacific director, Yamini Mishra, warned that with the impending withdrawal of US and NATO forces, “Afghanistan is drifting towards an outcome that threatens to undo more than twenty years of progress for women and girls.”

“Afghanistan is at a tipping point,” Mishra warned.

An unclassified report released in May by the US Director of National Intelligence contained the same dire prediction, saying that the Taliban remained “broadly consistent in its restrictive approach to women’s rights and would roll back much of the past two decades’ progress if the group regained national power.”

About 18,000 Afghans were hired by the US military to work as interpreters — and they and face a grim fate if the Taliban can get their hands on them.

“I receive a lot of phone calls from them,” one translator, Omid Mahmoodi, told CBS News this week.

And while the Taliban has claimed that the interpreters will be safe if they “show remorse” for their alleged treason, another interpreter, Omidullah, scoffed at that notion.

“Would anyone believe that?” he said, almost laughing.

“I will never believe them… They are always lying.”

Last month, the Biden administration announced plans to temporarily relocate the translators and their families — as many as 50,000 people — to unidentified third countries where they can wait for approval of special visa applications to move to the US.

“Those who helped us are not going to be left behind,” Biden told reporters.

Tactical air support has been crucial in keeping the Taliban in check, but the withdrawal of US troops and contractors could give the radical Islamic insurgents an edge by grounding the country’s air force.

The Afghan Air Force is in the midst of replacing its fleet of old, Russian-built fleet of aircraft with newer models provided by the US and its NATO partners, Foreign Policy reported last month.

But the decade-long effort — which also includes training pilots, mechanics and other personnel — isn’t set to be finished until 2024, a senior security official told the magazine.

“Now that they are withdrawing and we are not going to receive the airframes from the Americans that we had planned for, we will have to keep some of the old fleet. It creates a challenge for us that we didn’t plan for,” the official said.

“So we’re in uncharted territory when it comes to the conflict.”

Meanwhile, hundreds of US contractors who help the AAF maintain its planes have been trying to train Afghan mechanics via Zoom videoconferences ahead of their departure, Stars and Stripes reported Tuesday.

Although the lessons are being conducted in rooms near each other, spotty internet connections and other communication problems make the arrangement far less effective than face-to-face assistance, said Col. Abdul Fatah Ishaqzai, head of maintenance for the AAF.

In February, a report to Congress from the Pentagon’s Lead Inspector General on Operation Freedom’s Sentinel — the military’s name for its mission in Afghanistan — said that without support from the contractors, “no airframe can be sustained as combat effective for more than a few months.”

The report also revealed that the AAF lost almost one-quarter of it planes during the past year — and three or four more aircraft have been shot down since then, Ishaqzai said.

The Taliban were notorious for their harsh treatment of gay men, imposing punishment in an extremely cruel and barbaric fashion.

In one infamous 1998 incident, a tank was used to topple a large wall onto three men convicted of sodomy, with Taliban leader Mullah Muhammad Omar and thousands of others gathering to watch the grisly spectacle in Kandahar.

Two of the men were crushed to death, while the third survived and was imprisoned for six months before he fled to Pakistan, according to a report posted on the US Department of Justice website.

Similar executions also took place elsewhere, with some men allowed to go free if they survived.

Another method of punishment involved forcing men to “stand for hours in a public area in ‘blackface,’” according to the report.

Last month, 10 workers from the HALO Trust, a nonprofit that clears land mines and other unexploded ordnance around the world, were killed in a terror attack that the Afghan government blamed on the Taliban, which denied responsibility.

The slayings, in which the workers were gunned down while asleep in their camp in Baghlan province, were among a series of atrocities that led the Afghanistan Independent Human Rights Commission to call for a UN fact-finding mission.

Other attacks documented by the nonprofit group Human Rights Watch include the killings of two AIHRC workers when an improvised explosive device attached to their car — which had government license plates — blew up in Kabul in June 2020.

Afghanistan is also one of the deadliest places in the world for journalists, with 15 slain there in 2018.

In May 2020, an economic reporter and a technician for the privately owned Khurshid TV network were killed, and six other employees were wounded, when an IED blew up their van in Kabul.

A branch of the ISIS terror group known as the Islamic State Khorasan Province claimed responsibility for the blast.