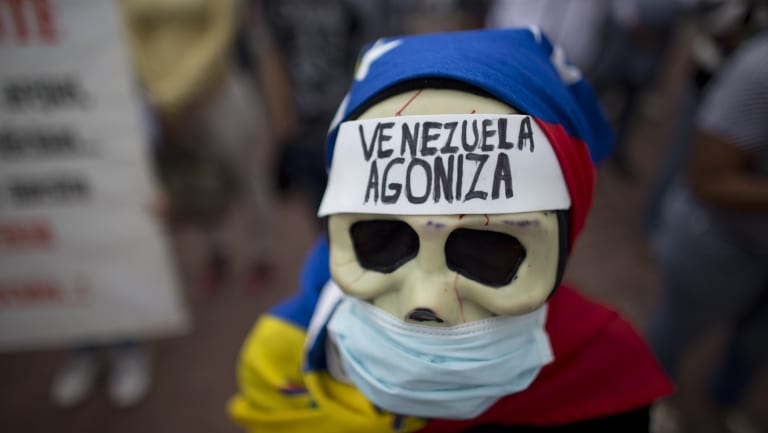 A woman with a message on her forehead reading ‘Venezuela agonizes’ at an anti-government rally ahead of Sunday’s poll.

Opposition leaders said the lifeless voting centres were evidence that Venezuelans heeded their call to abstain from voting in an election they contended was certain to be rigged in favor of socialist President Nicolas Maduro.

It was unclear when results might be made available.

Both Maduro and two anti-government candidates who broke with the opposition's push to boycott the election urged voters late in the day to go to the polls.

"We're not going to let a minority decide the destiny of this country," said Javier Bertucci, a television evangelist who was considered a longshot in the race.

The main anti-Maduro candidate was considered to be Henri Falcon, a one-time socialist stalwart who broke with the president. 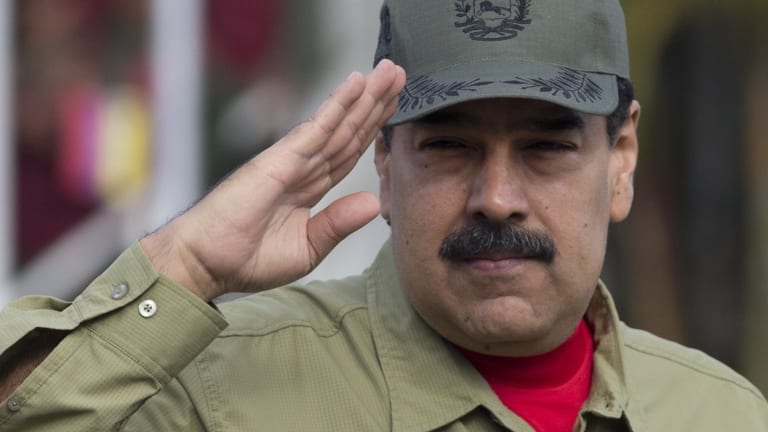 While polls say Venezuelans overwhelmingly blame Maduro for the country's severe economic troubles, he was heavily favored to win thanks to a boycott of the election by his main rivals amid huge distrust of the nation's electoral council, which is controlled by government loyalists.

Bertucci and Falcon both accused Venezuela's electoral authorities Sunday of allowing what they called blatant violations, including political sloganeering near voting centers.

At numerous polling sites, socialist party supporters set up red tents nearby where they scanned government issued "Fatherland Cards" that voters said they hoped would bring them a cash bonus or even a free apartment.

Under Venezuela's electoral law, any political activities must take place at least 200 meters from voting centers.

Falcon, a one-time acolyte of the late President Hugo Chavez, who implemented Venezuela's socialist administration, said he had received at least 350 complaints from voters about the existence of the "Red Points" sites. He said some were vent set up inside voting centers. He called it a "pressure mechanism, an element of political and social blackmail" directed at a poorer sector of the population.

National Electoral Council president Tibisay Lucena later said officials had confirmed a handful of complaints and rectified any violations, but he insisted that overall they were "nothing in comparison to previous electoral processes."

Maduro, setting an example for government supporters who he called on to vote early, cast his ballot in Caracas shortly after fireworks and loud speakers blasting a military hymn roused Venezuelans from sleep around 5 a.m.

He said Venezuelans would provide an example of democracy to the world and brushed back suggestions he was taking the country down an authoritarian path.

"It's offensive when they say the Venezuelan people are falling under dictatorship," he said after voting.

Maduro also said that if he won the election, he would seek an understanding with his opponents on a way forward for the crisis-wracked country. "I'm going to stubbornly and obsessively insist in dialogue for peace," he said.

In Petare, home to Caracas' biggest slum, voters waited in line to have their "Fatherland Card" scanned by socialist party volunteers. A woman wearing the red, yellow and blue colors of Venezuela's flag scanned each card with her phone – verifying that cardholders had done their patriotic duty of voting, presumably for Maduro.

Nayra Martinez, a city employee and opposition activist, bucked her party's call to abstain from casting her ballot, saying it was no time to stop fighting.

"If you're sick and the doctor gives you few days to live, you don't lie in bed waiting to die," she said. "You seek treatment."

But in the opposition stronghold of eastern Caracas, the leafy streets were largely empty.

In the neighborhood of Los Palos Grandes, opposition supporter Henri Roldan said he was not voting. Instead, he planned to eat out at a restaurant, a luxury the 62-year-old now limits himself to once a month since hyperinflation has devoured the buying power of his pension check.

"Our money just doesn't stretch as far as it should," said the retired computer technician. "Eating out is so expensive."

The election has drawn broad criticism since some of Maduro's most-popular rivals were barred from running, and several more were forced into exile. Echoing the views of Venezuela's tattered opposition movement, the United States, European Union and many Latin American countries said they would not recognize the results.

In addition, pressure tactics honed in past campaigns kicked into overdrive, further tilting the playing field in Maduro's favor.

Almost 75 percent of households said they received government-issued food boxes in the past three months, according to Datanalisis, and Maduro on the stump has promised that the 16.5 million holders of the fledgling fatherland card will be rewarded for their vote.

Some question the wisdom of not competing in an election, even if it is widely seen as rigged.