Victorians have lost $66 billion in the 30 years since electronic slot machines were introduced in the state. Ian Correia says he has contributed at least $1 million to that amount.

His 25-year addiction to pokie machines also cost him his marriage, jeopardised his relationship with his three children, and almost cost him his life. 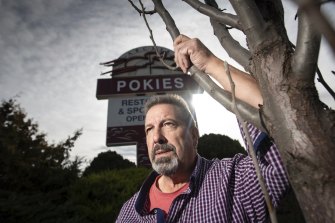 Ian Correia estimates he has put at least $1 million through Victorian poker machines during his addiction, which he kicked in 2014. He now helps others to quit gambling.Credit:Penny Stephens

“I gave up access to my kids in preference to gambling,” the 56-year-old says.

Correia began living out of his car and spending 90 per cent of his wage at the pokies. His eldest daughter soon refused to even speak to him.

“As the years went by, I started to get panic attacks and suicidal thoughts. [On three occasions], I actually tried to take my life.”

They have taken in $66 billon over the three decades, according to Victorian Gambling and Casino Control data analysed by the Alliance for Gambling Reform.

Labor premier Joan Kirner paved the way for the first pokie machines to be installed at Dorset Gardens Hotel in Croydon on July 17, 1992.

It followed years of gamblers heading to the NSW border to use the pokies, and Victoria wanted a piece of the $400 million pie.

While the machines are largely confined to casinos in the rest of the world, Australia has more than 75 per cent of the world’s pub and club pokies.

This has resulted in Australia topping the world’s worst average gambling losses at about $1000 per adult, each year. That’s 40 per cent higher than the second-worst country, Singapore.

The destruction has led to a shift in public support for the machines. Some major sporting clubs, including from the AFL and NRL, are selling off their pokie venues, and there is a push within the Returned and Services League (RSL) to divest from the machines.

Its outgoing president, Jeff Kennett, who became state premier months after pokies were introduced in 1992 and oversaw their expansion, said the venue wasn’t sold for ethical reasons, but instead to fund the club’s new home base. “If adults want to go and play them, they should be able to,” he said. 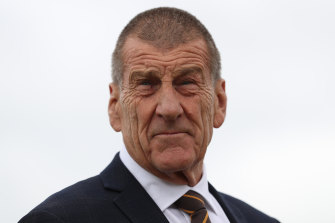 Former premier Jeff Kennett says if people want to play the pokies, they should be able to.Credit:Getty Images

An Ernst & Young report, obtained by The Sunday Age, outlines a plan to restructure RSL Victoria due to inadequate funding streams from its 270 sub-branches, 52 of which run gaming venues.

The report, released in March, says government assistance is required to prevent the league from becoming insolvent in the state.

Lucas Moon, a veteran and former president of the Hawthorn RSL, says that not only do pokies hurt veterans, but they don’t bring a financial benefit.

“The RSL is a charity … but it’s offering a product that we all know harms individuals,” said Moon, the Liberal Party’s candidate for Richmond. “They have forgotten about their core mission.”

Moon said pokies machines turned veterans, especially younger ones, away from getting support, while others became so addicted to them, they spent their entire compensation payout.

A RSL Victoria spokeswoman said the league’s financial woes were due to the pandemic and had since been mitigated.

She said the RSL had always looked to reduce pokie-related harm and that its core mission remained supporting veterans and their families.

Tim Costello from the Alliance for Gambling Reform said he once legally represented a woman in her 50s who was jailed for four years after stealing $60,000 from her workplace to feed to the machines a year after they came to Victoria.

“I remember visiting her in prison and going ‘how does a law-abiding person end up in jail?’,” he said. “And that was my penny dropping. There’s something in those machines that are highly addictive and predatory.”

In the decades that followed, Costello has seen that devastation multiply, including attending funerals of people who had taken their own lives while struggling with pokie addictions.

The Alliance is calling for $1 minimum bets and a ban on venues staggering their opening hours, to create 24-hour access.

Costello said politicians were too addicted to pokie donations and taxes to act. Gambling taxes delivered $1.6 billion to Victoria’s coffers last year, all of which goes into a hospital and charities fund.

This includes $665 million from pubs and clubs pokies revenue, not including more than 2600 machines at Melbourne’s Crown Casino. 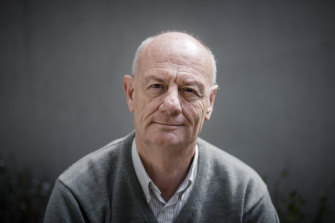 Reverend Tim Costello is one of Australia’s leading anti-gambling campaigners.

Victoria’s pokies and pubs lobby, the Australian Hotels Association, gave a record $761,000 to the Andrews government before the 2019 state election. It gave $190,000 to the Victorian Liberals and $181,000 to the Nationals.

A state government spokeswoman said harm minimisation requirements were introduced in all venues in 2020, including a $500 cash withdrawal limit. She said the government had given $153 million to the Victorian Responsible Gambling Foundation.

The spokeswoman did not respond, when asked whether the government would accept pokie donations before this year’s election. The state opposition and AHA were contacted for comment but did not respond. 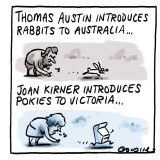 Studies show that the closer someone lives to pokie venues, the greater the likelihood they will use them and experience financial hardship.

From Ian Correia’s home in Werribee, in Melbourne’s west, there are 46 venues and 2864 machines within a 30-minute drive, more than the number of machines at Crown Casino.

Three of the five municipalities with the highest losses in Victoria over the past 11 months sit next to each other across Melbourne’s western and northern suburbs.

Brimbank lost $113 million, while Hume and Whittlesea each lost $93 million, despite being in lockdown for several months during that time. The three areas are among the five most disadvantaged municipalities in Melbourne.

Kealba Hotel, in St Albans, recorded the highest losses in Brimbank in 2019/2020. Punters at the hotel, formally owned by Melbourne Storm, lost $13.8 million, which equates to more than $52,000 a day. 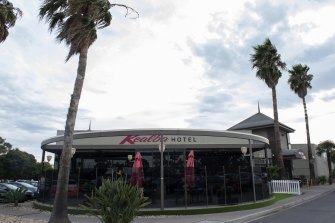 The Kealba Hotel is one of the worst offenders for pokie’s losses.Credit:Penny Stephens

At midday on Saturday most of the hotel’s 86 pokie machines are in use. Sounds of them beeping and chiming fill the dimly-lit room.

There is little chatter between punters, who each stare ahead at the machines they are constantly tapping.

A staff member approaches the woman and asks if she’s okay. She’s fine, she says. The staff member smirks and walks off. The woman inserts another $50 note.

In another corner of the room, I put a $1 coin into a machine. It lights up and begins dinging loudly. I’ve won $500. I start to shake.

The staff member is surprised when I immediately cash it in. Correia explains that most pokies addicts use their winnings to keep playing until they run out of money.

“Winning wasn’t exciting. The dopamine effect is actually the anticipation,” he says. “The only excitement was … I’ve got more time and I can bet higher.”

After his third suicide attempt in 2014, Correia put all his strength into his recovery. Since then, he has paid off his credit card debt, became a homeowner and regained access to his children.

“But the most beautiful thing was that in 2017 my daughter, who was 17 at the time, actually rang me,” he says. “She ended up coming to live with me.”