A key test of Victoria’s preparedness to live under ‘COVID-normal’ will begin on Monday when a trial of vaccine passports begins.

The trial will be the first taste of life under a vaccine passport system, and its success will pave the way to major events including a live music concert later this month and a crowd of 10,000 fans at the Melbourne Cup. 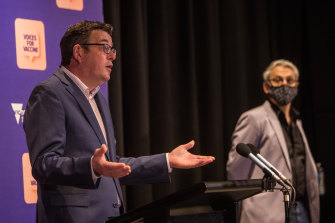 “We’re delighted with 10,000 people. We think that’s a great number. We’ve had over 10,000 people at our course previously, so we know we can do 10,000 people in a COVID-safe environment and we’re really looking forward to Cup Day restarting major events in Melbourne,” Mr Wilson said.

Deakin University epidemiologist Catherine Bennett said there was sense in trialling large events outdoors but she warned that the October 30 concert at the Sidney Myer Music Bowl would happen when “there’s going to be quite a bit of virus in the community”.

“That said you actually have to trial some things with the possibility of someone being infectious included, that’s when you find out whether they work. You can see if someone did test positive, you can then assess whether there’s been an issue for people around them.”

At the Melbourne Cup, there are likely to be four zones of about 2500 people, spread across the expanses of Flemington, plus a fifth zone exclusively for racing participants such as jockeys and trainers.

Each zone will have its own entry point, so racegoers are not mixing with people in other zones. Racegoers will be able to access food and drink in those zones.

The VRC will rely on new QR code technology to prove vaccination status on entry.

Crowds of 10,000 vaccinated patrons will also be able to attend Flemington on Oaks Day and Stakes Day.

The trial of new check-in technology will be a precursor to the system that is set to roll out more broadly once Victoria reaches the 80 per cent double vaccination for people aged over 16.

Regional Victorians will get to test the vaccine passport technology first at 14 businesses in six local government areas from Monday.

The businesses include cinemas, hotels and cafes, as well as a gym, church and a beauty clinic, and will be allowed to open to higher numbers of fully vaccinated Victorians.

Customers will be required to show proof of vaccination using the Service Victoria app on their smartphone.

Body Fit Training Bendigo owner Reece Tuohey said the trial would provide an indication of how life could once again return to something more familiar after the massive disruption caused by lockdowns.

“It’s the closest it’s felt to normal in the past few months and a sense of what the new normal will look like,” he said.

The business will continue to run classes outdoors for people who have not yet had a chance to be vaccinated. But it will now be able to accommodate 24 customers inside and 12 outside.

Mr Tuohey said the new system would allow customers to check in and confirm their vaccination status at the same time.

“You’re not creating another step you just have to enforce the rules a little bit more.”

“These trials aren’t about saying ‘we had one person pass the virus on, we can’t open cafes’,” she said. “It’s about saying what is the risk of opening cafes if one person is positive but most people are vaccinated, what does that look like?

“Can we just let that run and not worry about that, unless we see a cluster of transmission, or it’s in the part of the community with low vaccination rates.”

Creative Industries and Government Services Minister Danny Pearson said from Monday Victorians would be able to incorporate their COVID-19 digital vaccination certificate with the Services Victoria app, to check in to a venue or event while simultaneously confirming their vaccination status.

The trial includes the concert planned for the Sidney Myer Music Bowl on October 30 with thousands of fans, subject to approval from Chief Health Officer Brett Sutton. No details have been released about who will perform, the government has said only that it will be Victorian artists.

Music Victoria chief Simone Schinkel said she was “super excited” about the concert.

Ms Schinkel said Mr Pearson had rung her on Sunday morning to tell her. “I’m more than happy with that sort of announcement, to get some sort of live music up and happening again,” she said.

“It’s exciting to be seeing events happening again, in one form or another,” she said. “It’s so great to have music back on.”

Another music industry source said that the Mushroom Group was “likely” to be involved in the concert but that little was yet known about the specifics including what any line up might be.

Professor Bennett said the concert could give a good insight into how events could operate while the virus is in the community as it was still not be clear if the current outbreak has peaked yet.

“It means you’ve got a greater chance that people going, even if they are fully vaccinated, might have been infected because you’ve got a stronger infection force in the community,” Professor Bennett said.

“But these events are better tested if there is a chance that someone’s infectious, so that you can actually see what has happened if it’s a problem for anyone else.”

A green stripe with a tick will indicate the user’s vaccination certificate on the Services App is legitimate.

“Coloured holograms that move can be seen on the check-in screens so venues will know it’s real, making it much harder to fake a check-in screen,” he said.

Mr Pearson insisted the Victorian government would not have access to data linked to a person’s Medicare account.

Premier Daniel Andrews said bringing crowds back to the Melbourne Cup was an important milestone.

“That’ll be a really important day for every single Victorian I think, and send a message to the rest of the country and indeed the world about the fact that we are open,” he said.

Racing Minister Martin Pakula said if 80 per cent of eligible Victorians had not been double vaccinated by Melbourne Cup Day – on November 2 – then the 25-kilometre radius would be in effect.

“I checked my own distance from the racetrack. I think I’m 23 kilometres from Flemington. But the fact is, the VRC has tens of thousands of members and many more than 10,000 would live in that radius,” he said.

“This is not particularly different to the situation of Boxing Day last year where there was a 30,000 limit. That meant that not all MCC members were able to get in on day one; they gave some an opportunity to go day two, day three and thereafter.”

The VRC had proposed to host 11,500 on each of the four days, but Mr Pakula said the public health advisory panel thought 10,000 was the safe figure to approve, particularly when that crowd number is approved for three race days over five days.

Mr Pakula said they also had to consider a number to keep racing industry participants, such as trainers and jockeys, safe. 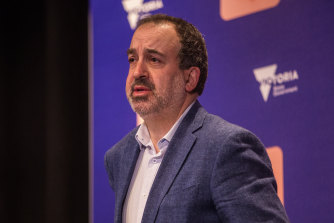 “There’s going to be a pretty hard zone between patrons and participants and that’s really important for the security of the industry,” he said.

“We don’t want to see any of the participants catching this thing because it can put the rest of the carnival at risk.”

Mr Andrews said the government was aware of the burdens on venues but many, like pubs, were already accustomed to checking the ID of customers and declining to serve people who had drunk too much. He said Victorians should assume the vaccination system would be in place for at least the duration of the summer.

Victoria recorded 1890 new coronavirus cases on Sunday – 1889 local cases and one in an international traveller in hotel quarantine.

Eighty-six per cent of eligible Victorians have now received one vaccine dose while 58 per cent of people aged over 16 have received two jabs.

Victoria is on track to reach the 70 per cent double vaccination rate on October 26 and 80 per cent on November 5.

The Age on the weekend revealed the government was considering scaling back the powers of the Chief Health Officer and giving the Health Minister authority to sign legally binding public health directions.

On Sunday Mr Andrews said that By the time Victoria started hitting its vaccination targets, managing the pandemic would no longer be just about a health crisis, and the response would need to reflect that.

“It would be in many ways unfair to ask someone who is an outstanding public health expert to have to balance all those things … It is a broader picture, a broader view that you have to have.”