Outcry from residents and activists means plans to knock down a century-old building in the heart of Melbourne’s Hardware Lane district and replace it with a 23-storey hotel have been abandoned.

Melbourne House at 360 Little Bourke Street has been saved from demolition following a campaign over several years, but residents are concerned heritage protections in the CBD do not go far enough. 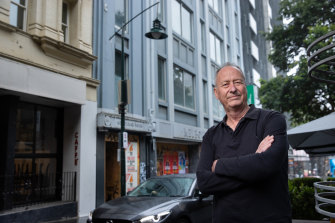 Resident Mark Baker in front of Melbourne House, which has been saved from demolition. Credit:Simon Schluter

In 2018 the City of Melbourne gave Singapore-based developer Roxy Pacific the green light to tear down the building, which did not have heritage protection, and replace it with a 308-room hotel.

However, Roxy Pacific has shelved those plans and will instead undertake a $34 million redevelopment and refurbishment of the building for retail and office use.

The development will retain Melbourne House’s six-storey facade and add an eight-storey extension on top, which will be set back from the street.

The City of Melbourne has approved the new plans, with construction expected to start in the next three years.

The Hoddle Grid Heritage Review in 2011 described Melbourne House, built in 1923, as a site of “aesthetic significance” and a “good example of boom-period capital-zone warehouse distinguished by its unusual and particularly flamboyant facade and its early use of the Queen Anne revival style”.

The reprieve for Melbourne House follows the bulldozing of the 1920s Melbourne Theosophical Society building on Russell Street earlier this year and the tearing down of the Tramways Board building and the former National Mutual building in the CBD. 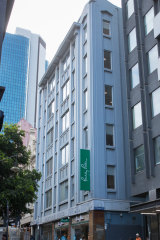 Melbourne House on Little Bourke Street has been described as a building of “aesthetic significance”.Credit:Simon Schluter

“This is a win for people power and the inner-city locals who have campaigned for the retention of this building for many years,” he said.

“It was heartbreaking that it was scheduled to be demolished due to lack of protections. This new proposal will retain much of the interwar building with its Manhattan-style facade, which is a great contributor to the character and identity [of] the CBD.”

Rather than “facadism” – in which the building is gutted, leaving just the front like a stage set – the planned redevelopment is known as a “top-up”, retaining much of the original building and adding additional storeys.

Mark Baker has lived in the street for more than two decades and said the building and proposed development were significant for Melbourne.

“We are certainly pleased that Melbourne House is being saved, that it is not being demolished, that the facade will remain, because it is an important building,” he said. “It should always have been protected. There was a screw-up in the process around the heritage overlay for that area.”

However, Mr Baker said residents and traders had been left in the dark about the amended plans, with council not consulting them.

“This is a disgraceful situation because there’s been no consultation, no notification of surrounding property owners, including our building,” he said. “Our owners’ corporation has not been advised of any decision or been given any opportunity to review or to respond at this point.”

Mr Baker said it was good news the building would not be demolished, “but it’s happened by accident, not by design”.

“Hardware Lane precinct is one of the most important historic heritage areas of the City of Melbourne and the planning decisions in relation to it have been an abomination over the years,” he said.

“The council rides on the back of the laneway culture of Melbourne but does nothing at the end of the day to really protect what is a priceless part of our city and the fabric of our city.”

Heritage Victoria executive director Steven Avery said the City of Melbourne had almost 13,000 properties on its heritage overlay requiring a planning permit from council to make a change.

“The City of Melbourne has been a diligent partner in protecting our state’s heritage,” he said. “Melbourne is one of the more proactive councils in protecting their local heritage – commissioning timely heritage reviews and keeping their heritage overlay up to date.”