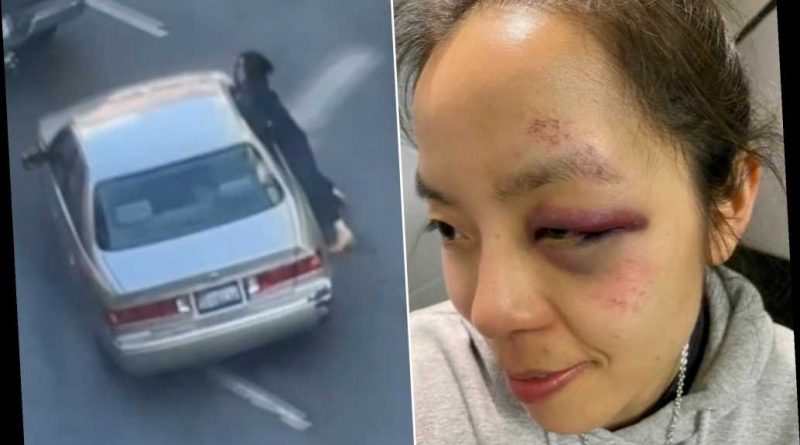 Senators back off threat to withhold support for Biden nominees

Dramatic video captured a 33-year-old Asian woman being dragged by a car during a robbery in San Francisco in which she was punched in the face by purse snatchers, according to reports.

The woman – identified only as Clarisse – was walking home from church with a friend Sunday when the three attackers, including one in an orange ski mask, approached them from behind, KGO reported.

One of them grabbed Clarisse’s handbag – but she refused to let go and was punched repeatedly before holding onto the side of the getaway car, which dragged her down the street, according to the station.

She eventually fell onto the pavement when the vehicle lurched.

The video was shot by local resident Benjamin Freemantle, a principal dancer at SF Ballet, who shared it with SFGATE.

It shows passers-by rushing to the aid of the woman, who was left battered, bruised and cut in the shocking ordeal.

Clarisse said she doesn’t know whether the attack was hate-motivated on a day that saw record turnouts at anti-Asian hate rallies in the aftermath of the Georgia spa killings. But her friend, who also suffered minor injuries, claimed without corroboration that the crime could be, according to KGO.

The identities of the three attackers were not known and the case remains under investigation. SFPD did not immediately respond to a request for comment by The Post.

“Know that you’re loved, know people are there to help you. I know it’s hard now but we need to get back and have people in work and school so they are predictively occupied and don’t feel like they need to do things,” Clarisse said in a message to her assailants.

Authorities said it was unclear if Clarisse was targeted because of her race, but Freemantle expressed concerns for the city’s Asian community.

“It’s just constantly happening in the city, all over the place,” he said, according to Fox News.

“And I’m just scared for that community of people who have to go through their life not only with the pandemic, but this piled on top of it,” Freemantle added.