Britain’s jetpack commandos of the future: The Royal Navy enlists stunt men in Iron Man-style jet suits to prove how jetpacks could be used to storm ships

One man donning a jet-powered, carbon-fibre suit is seen launching off a vessel and effortlessly fly several feet into the air.

Like something out of a Hollywood blockbuster, after a brief period to stabilise over the water, the man then storms a ship by landing on it.

He then reverses his journey, glides off the ship back up into the air and hovers onto the vessel he came from.

A second clip from the same footage shared by the U.S. Naval Institute on their Twitter feed shows four men, again clad in Jet Suits, simultaneously launch themselves off a vessel flying in the direction of a ship in the middle of the ocean.

One by one they are seen climbing high into the skies circulating the ship before taking turns to safely land onto it and shaking each others hands in victory. 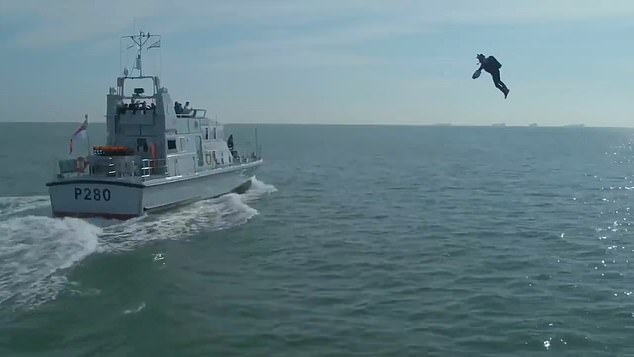 Its founder, Richard Browning, has previously demonstrated the suit in a number of countries around the world.

It gives the wearer full control to fly through the power of five mini jet engines with a flight time of eight minutes. 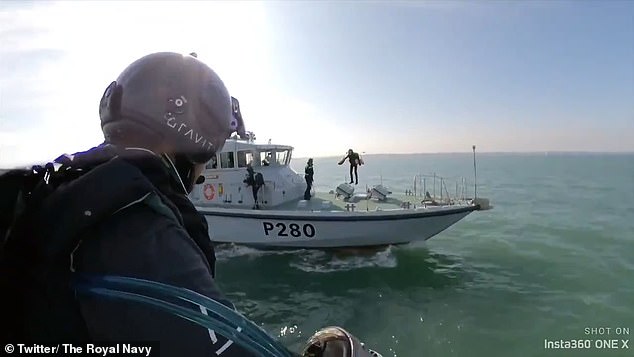 The Jet Suit gives the wearer full control to fly through the power of five mini jet engines with a flight time of eight minutes. 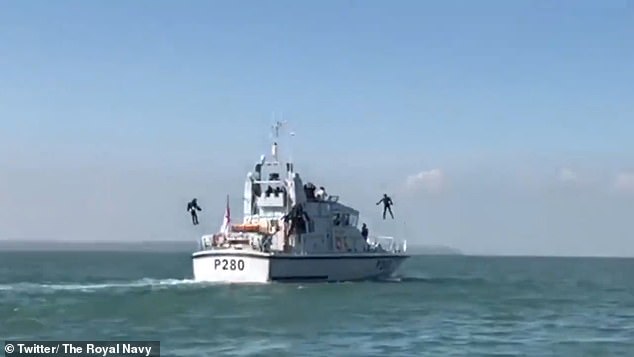 Producing over 1,000 brake horsepower to gain flight, it can reach speeds of over 55mph.

Along with the 94-second Twitter footage, the U.S. Naval Institute posted: ‘The Royal Navy has been testing Jet Suit assault teams to determine if the Iron Man-like suits could be used to rapidly swarm and board ships.

‘U.S. Special Operations Command is also evaluating a jetpack that can reach speeds of more than 200 mph.’