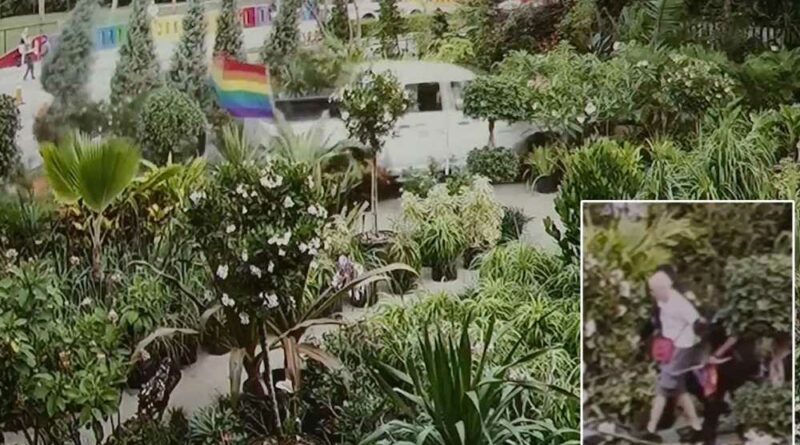 Dramatic new video shows a driver crashing to a halt seconds after fatally plowing through a Florida Pride parade — as the FBI on Sunday helped investigate whether it was a hate attack or tragic accident.

The white pickup — flying a rainbow-colored Pride flag on the back — had hit two members of a local Gay Men’s Chorus at the Fort Lauderdale event around 7 p.m. Saturday, killing one and leaving another hospitalized.

The driver then crashed it through the fence of a nearby garden center, captured in surveillance footage obtained Sunday by WPLG.

After mowing over rows of plants, it finally came to a halt — with an officer running in after it seconds later, the footage shows.

The mustachioed bald driver — wearing a white T-shirt with the gay chorus group’s logo — was then seen handcuffed as several officers marched him back out of the garden center to a waiting squad car.

While he was taken into custody, local law enforcement nor the FBI joined in to assist the investigation had identified him nor revealed if there had been charges. “We ask for patience as we work to conduct a thorough and complete investigation,” Fort Lauderdale police tweeted.

Fort Lauderdale Mayor Dean Trantalis insisted the driver was “screaming vulgarities” and came within inches of hitting the convertible carrying Rep. Debbie Wasserman Schultz, who was seen crying at the scene.

“This was a terrorist attack against the LGBT community,” Trantalis told WPLG.

“This is exactly what it is. Hardly an accident. It was deliberate, it was premeditated, and it was targeted against a specific person,” he said.

However, the driver told police that his foot was stuck between the gas pedal and the brake causing him to lose control, CBS said.

“To my knowledge, it was an accident. This was not an attack on the LGBTQ community,” the chorus’ president Justin Knight said in a statement, confirming the driver “was a part of the chorus family.”

The group reiterated the message Sunday, calling it an “unfortunate accident” in a Facebook message about the “tragic death and injuries.”

In a series of posts, Chris Caputo, the city commissioner for Wilton Manors, where the parade was taking place, also insisted it “seems increasingly probable it was an accident.”

“Not speaking on behalf of the city — but expressing my own personal opinion … tonight’s tragic, heartbreaking incident at the Stonewall Parade was an accident and NOT a terrorist attack,” he insisted.

“While I didn’t witness it, I heard many first-hand witness statements which led me to believe it was a heartbreaking, unfortunate accident,” he said, saying that “our hearts are filled with sadness.”

Broward County Sheriff Gregory Tony also said the “tragedy took place within feet” of him and his officers, while not speculating on whether it was an accident or not because “authorities are still gathering information.”

“Our prayers are with the victims and their families. Be sure to hug the ones you love tonight,” he tweeted.

The chorus confirmed that both victims and the driver were all members, but have yet to identify any of them.