The former business secretary announced earlier this month he would not stay until the next election, due in 2022.

But he has refused to be any more specific insisting only that he wants to overhaul the party’s rules before leaving his post.

One proposed reform will allow non MPs to take the party crown – meaning Sir Vince’s MPs are spending their conference this weekend stumping for a policy that could curtail their own careers.

Deputy leader Jo Swinson refused to say today whether she would run for the leadership when Sir Vince does eventually stand down. 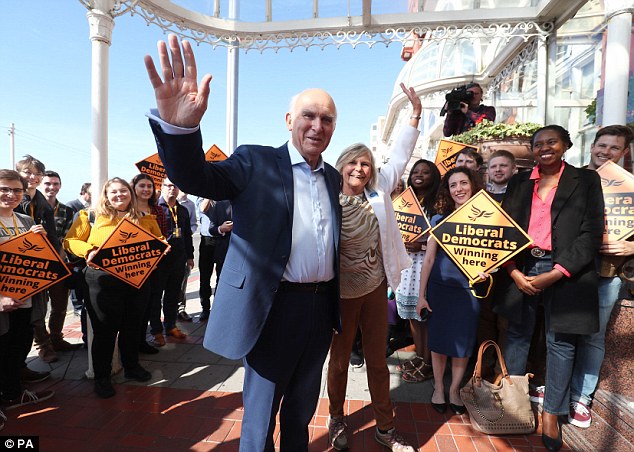 Sir Vince insisted today he would stay on until Brexit is ‘resolved or stopped’, and hoped to lead the party into local elections next May.

The Lib Dems today signed off on a policy to give migrant spouses an entitlement to benefits from their first day in the UK – without any form of means testing.

The move was voted through at the Lib Dem conference in Brighton despite opposition from party HQ and warnings from activists that the party would be ‘slaughtered’ on the doorstep as a result.

The demand was tagged on as an amendment to a major new policy which outlined the Lib Dems’ approach to immigration issues.

In practice it would mean, under a Lib Dem government, migrant spouses and legal partners can claim ‘without any form of means testing or prohibition on seeking support from the state’.

The party’s home affairs spokesman Sir Ed Davey urged delegates to reject the proposal, saying the policy had ‘already captured the spirit of the amendment’.

Pressure increased on the ex-Cabinet minister after former leader Lord Menzies Campbell said Sir Vince ‘can see the end of the road’.

A defiant Sir Vince responded by telling BBC One’s The Andrew Marr Show: ‘I’m not running out of road, there’s a lot of road ahead.’

Asked if he would still be party leader by the end of next year, Sir Vince said: ‘I think that’s uncertain. I have a series of tasks to do.

‘I’m going to do them. I’m not setting a time horizon. I think it would be foolish to do so with so much uncertainty flying around.’

Pressed on being at the helm at the time of the next slated general election in 2022, he said: ‘2022 is a long time off, I think it’s improbable, actually, that I will be leading us then.’

Lord Campbell told the Daily Mirror: ‘You know when you’ve run out of road. I think he can see the end of the road.

‘He’s given it his best shot. He has brought stability, which was necessary.’

Sir Vince said the Lib Dems were talking to disillusioned Labour and Tory MPs, but he insisted setting up a new party ‘is not going to happen’.

The Lib Dem leader warned that levels of debt in the economy are ‘dangerously high’. 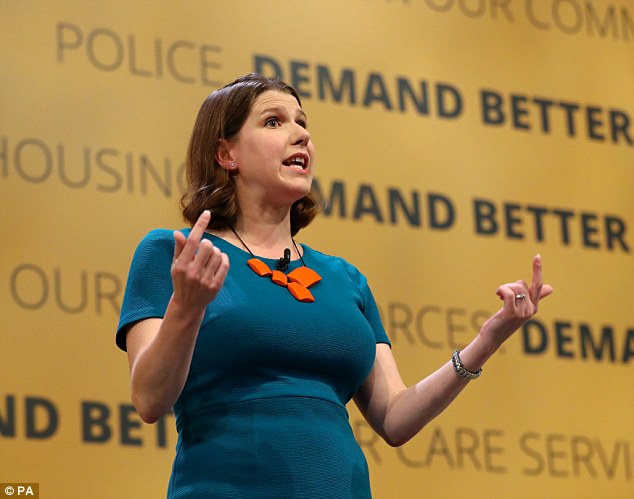 Deputy leader Jo Swinson refused to say whether she would run for the leadership when Sir Vince does eventually stand down.

Asked if links between austerity measures introduced by the coalition government and the Brexit vote outcome caused him any regrets, Sir Vince told a Lib Dem conference fringe meeting: ‘Yes, it does.

‘One of the aspects of… austerity that did most harm was the massive cutback in public investment.

‘I know that it’s the emotive stuff around social security spending that gets people angry. But the thing that did harm was the big cutbacks in investment. And that is what has caused many of these northern communities to continue to decay.’

Ms Swinson refused to answer questions on her own leadership ambitions today, insisting there was currently ‘no vacancy’.

Pressed by Sophy Ridge on Sky News she said: ‘At the time that Vince does stand down then absolutely I’ll take a view at that point and you can certainly ask me that question then.’