Virgin airlines has announced it will no longer be deporting people using its planes in the wake of the widespread condemnation of the wrongful removal of Windrsuh people to foreign countries.

The airline will no longer assist the Home Office in deporting illegal immigrants following pressure from LGBT campaigners who said its policy to deport immigrants was at odds with it being the sponsor of next month’s pride march.

Virgin said it had already informed the Home Office of its decision, which it said was taken ‘in the interest of all our customers and staff’.

Speaking to The Guardian, a Virgin Atlantic spokesperson said: ‘Last month we made the decision to end all involuntary deportations on our network, and have already informed the Home Office. We believe this decision is in the best interest of our customers and people, and is in keeping with our values as a company.’

The Windrush scandal came to a head earlier this year when it emerged hundreds of Commonwealth citizens who came to the UK in the years up to 1973 and were entitled to be in the country had been wrongly threatened with deportation.

Migrant rights campaigners said the airline’s decision reflected  ‘a profound shift in public opinion on deportation since the emergence of the Windrush scandal’.

Virgin had previously provided seats on its commercial flights to detainees and security staff accompanying them.

Home secretary, Sajid Javid, admitted last month that 63 Windrush generation people had been wrongly removed to the Caribbean, who had lived in the UK before 71 – making them eligible to be UK citizens

Virgin’s decision comes after campaigners from an LGBT campaign group working on securing migrant rights contacted the airline, which is understood to have removed some LGBT asylum seekers to countries where same-sex relationships are illegal.

Sam Bjorn, a spokesperson from Lesbians and Gays Support the Migrants, said: ‘Virgin’s role in enforcing deportations has been devastating to people taken, against their will, to countries where they risk persecution, or have very little connection to. Not only did the airline unflinchingly put people’s lives in danger for many years, it also made their staff unwillingly complicit in the brutality of the UK’s hostile environment policy.’

But Virgin said the airline had already decided to end its involvement with deportations before the intervention of the group.

A Home Office spokesperson said: ‘We do not comment on operational matters. Officials would not comment on contracts with specific airlines, adding only that the department ‘seeks to develop strong working relationships with our partners and strives to work collaboratively with air carriers to return those who are in the UK illegally.’ 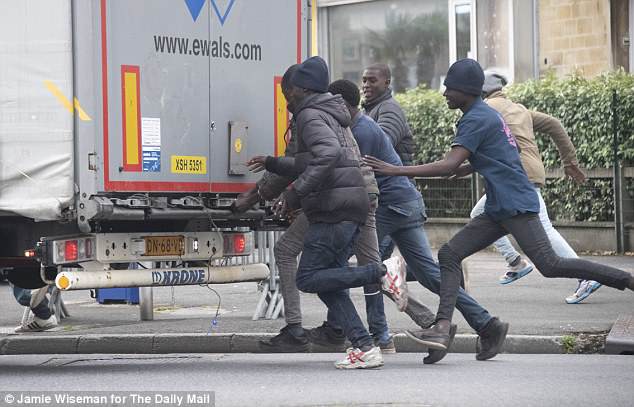 The airlines decision comes after it was LGBT campaigners who said its policy to deport immigrants was at odds with it being the sponsor of next month’s pride march. Pictured migrants in Caen continue to break into lorries bound for the UK using the Ouistreham ferry port to Portsmouth

Transport of detainees is becoming an increasingly politically sensitive issue. Last week, in the US, American and United airlines said they would refuse to fly migrant children separated from their parents on behalf of the US government.

Almost 1,000 seats on flights were booked to deport people suspected of being in the UK illegally to Caribbean countries in the year to March 2018, official figures show.

Deportations to the Caribbean were ‘deferred’ after the Windrush revelations; it is not clear whether they have been restarted. In the two years 2015-17, the government spent £52m on all deportation flights, including £17.7m on charter flights.