New York: US President Donald Trump, Scott Morrison and billionaire businessman Anthony Pratt would travel to the heart of "Trump country" during the Prime Minister's US visit next month, under a plan being discussed at the highest levels of the US and Australian governments.

The closely-guarded plan would see Mr Trump and Mr Morrison make an expedition to Ohio for the official opening of a new $400 million paper mill and box factory owned by Mr Pratt, Australia's richest man and one of Trump's loudest business backers. 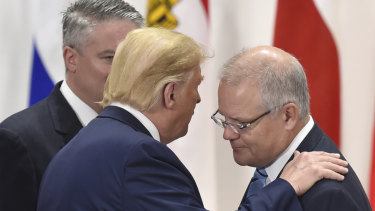 Donald Trump and Scott Morrison at the G20 in Japan in June. Credit:Kazuhiro Nogi

A trip outside of Washington with the President would be a major coup for Mr Morrison, and would underscore the increasingly close relationship between the two leaders. It is extremely rare for Mr Trump to travel outside of the US capital for trips with foreign leaders.

It comes as the organisers of the Presidents Cup golf tournament, to be held at the Royal Melbourne Golf Club in December, grow increasingly confident that Mr Trump will travel to Australia to attend the event.

Sources told The Sydney Morning Herald and The Age that White House advancers had scoped out the venue but confirmation of a Presidential visit would not be made for some months.

"It's basically a lock but things can change quickly," a source involved in the planning said. 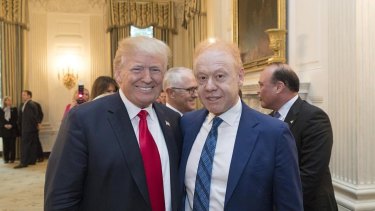 The Herald and The Age reported earlier this month that First Lady Melania Trump was pushing her husband to visit Australia and White House chief-of-staff Mick Mulvaney was working to make the trip happen.

Mr Morrison will next month become just the second foreign leader to receive a state dinner at the White House since Mr Trump took office.

The visit to Mr Pratt's 110-acre site in Wapakoneta, Ohio, would be symbolic on several levels.

It is designed to emphasise the economic relationship between Australia and the US, which has previously been overshadowed by the defence alliance between the two nations.

Ohio is also one of the Midwestern "rust belt" states that delivered Mr Trump his shock victory over Hillary Clinton in the 2016 election and is central to his 2020 re-election prospects.

Wapakoneta is the biggest city in Auglaize County, where 79 per cent of voters cast a ballot for Mr Trump in 2016.

The President would use the event to spruik the increase in manufacturing jobs and economic growth since his election victory.

Sources said the Ohio trip had not been confirmed and was an ambitious proposal given the President's heavy workload in Washington. Other locations for a joint trip outside the US capital have also been considered.

Mr Morrison will also travel to New York next month to attend the United Nations General Assembly and meet with business leaders.

Mr Pratt has visited Mr Trump's lavish Mar-a-Lago Florida several times and sat next to the President at a 2017 event in New York commemorating the 75th anniversary of the Battle of the Coral Sea.

Mr Trump gave Mr Pratt a standing ovation when he announced he planned to invest $US2 billion ($2.7 billion) in the US over the next decade, much of it in the Midwest.

Mr Pratt has praised Mr Trump for creating "a tsunami of investment in the US" through his corporate tax cuts and reduction in regulations.

Mr Pratt splits his time between Melbourne and Atlanta, Georgia, where his companies Visy and Pratt Industries are headquartered.

Mr Trump, a golf fanatic who owns courses around the world, has not travelled to Australia since his November 2016 election victory but opened the door to a formal visit during the G20 summit in June in Osaka, Japan.

Asked in June whether he would attend Mr Trump said: "I’ll tell you what, I’d like to. It might not be easy, but I’d like to. That’s a big deal. That’s going to be great."

Mr Morrison said at the time that he had issued a formal invitation to the President to visit Australia.