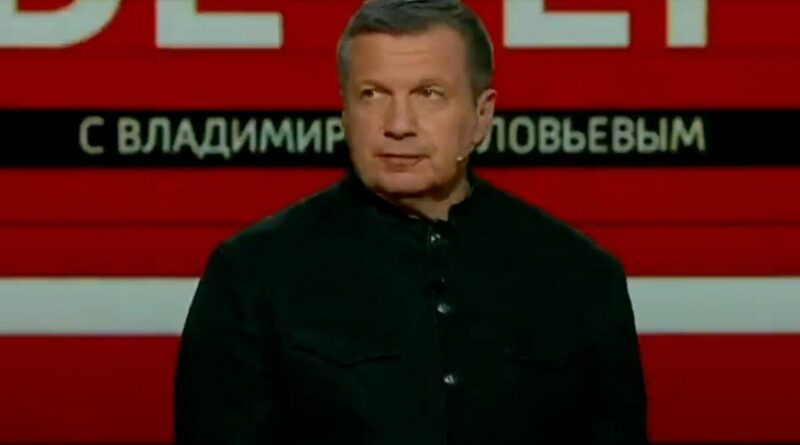 Russia state TV host Vladimir Solovyov has lifted the lid on Vladimir Putin’s security state as he admitted being watched over by officers from the Russian National Guard. Solovyov noted that a fellow presenter on the state-run channel Russia1 was also being guarded by Russian security forces in an eye-opening look behind the Kremlin’s iron curtain.

Solovyov told his Russia1 co-hosts: “Due to the circumstance you are aware of, I communicate a lot with the guys who are forced to guard us.

“They are officers of the National Guard.”

He then tells how one of the officers is an “intelligent young guy” who worked with a judge for eight years.

The exchange points to the security apparatus surrounding the Kremlin’s media spokespeople.

Solovyov has been a vocal proponent of Russian military aggression over Ukraine and has even talked up the threat of a nuclear war with the United States.

Earlier this week, Evgeny Buzhinskiy, a former Lt General in Vladimir Putin’s army told Russia1 how a 7.5 megaton nuclear rocket could be launched over the South Pole to devastate New York.

“What’s attractive about the South Pole…”

Russian TV host admits economy 'is not mobilised for war'

“We know right away where to send it via the North pole, or the South Pole,” jumped in Solovyov

“We have only one target!”

The former Lt General continued: “The continental territory of the US.”

RT Editor-in-Chief Margarita Simonyan then asked: “If this rocket ends up over there in the worst-case scenario what kind of objects can it destroy?

“What kind of a territory?”

“If 7.5 megatons will be delivered to the territory of our so-called partner…then objects like the city of New York.

“A good city, but it would be gone,” replied Buzhinskiy.

“Completely gone, with one rocket. Completely. I mean, completely,” he added.