Neither the outlet nor editor-in-chief Anna Wintour have future intentions to work with West, 45, again, a spokesperson for the magazine told Page Six in a statement on Friday, October 21.

The Chicago native had a long history with the 72-year-old fashion icon, stemming from his first Met Gala invitation ahead of the 2009 benefit. Five years later, West and ex-wife Kim Kardashian made their Vogue debut when they posed on the magazine’s cover following their Italian wedding. (The now-exes split in February 2021 and were declared legally single one year later.) Wintour has even attended numerous Yeezy fashion shows, sitting in the front row, through the years. 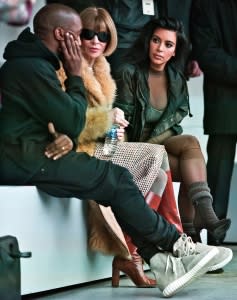 While neither Vogue nor the fashion journalist have addressed how they plan to cease their working relationship with West, it comes shortly after the Grammy winner’s Paris Fashion Week controversy. Earlier this month, West and Candace Owens wore “White Lives Matter” shirts at his Yeezy show, sparking criticism from Hailey Bieber (née Baldwin), Gigi Hadid and Vogue editor Gabriella Karefa-Johnson.

“I do certain things from a feeling, I just channel the energy. It just feels right. It’s using a gut instinct, a connection with God and just brilliance,” the “Heartless” rapper defended his sartorial choices during a Fox News’ Tucker Carlson Tonight appearance on October 6. “People, they’re looking for an explanation and [they] say, ‘Well, as an artist you don’t have to give an explanation,’ but as a leader, you do. So, the answer to why I wrote ‘White Lives Matter’ on a shirt is because they do. It’s the obvious thing.”

Sean “Diddy” Combs, for his part, was equally upset by West’s actions and offered to have a face-to-face conversation to address its problematic messaging. West was not interested in compromising at the time, sharing a string of anti-Semitic messages in retaliation.

While West has since deleted his posts, both Instagram and Twitter restricted his accounts before he eventually issued an apology.

“I will say I’m sorry for the people that I hurt with the ‘death con’ [comments],” the musician said during a Wednesday, October 19, appearance on Piers Morgan Uncensored. “I feel like I caused hurt and confusion. And I’m sorry for the families of the people that had nothing to do with the trauma that I had been through, and that I used my platform where you say hurt people hurt people. I was hurt.”

West’s controversial behaviors have since caused repercussions for his fashion business. Balenciaga — who worked with the “Stronger” artist on a Yeezy Gap collaboration — announced on Friday that they will “no longer” have a relationship or complete future projects with West.

The record producer’s Yeezy line has also partnered with Adidas, though the brand has yet to publicly speak out about the controversy. David Schwimmer, for his part, has demanded that the footwear brand cut its ties with West as well.

“Now what @adidas,” the Friends alum, 55, wrote via Instagram Story on Friday, sharing a screenshot of West. “Join me and the Anti-Defamation League in demanding @adidas #RunAwayFromTheHate.”

West has not publicly addressed his changing business relationships.