Home » World News » War of the Rineharts: How succession to Lang’s iron ore throne ‘may tear it all apart’ 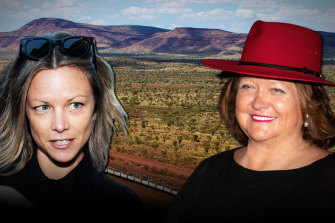 It is a rare suggestion that Australia’s wealthiest woman Gina Rinehart could lose most of her $35.6 billion iron ore fortune over the price of a few printed court documents, but it is one floated before the West Australian Supreme Court in a bid to suppress a discovery action brought against her.

Mrs Rinehart’s lawyers argue that, should her daughter Bianca Rinehart succeed in gaining information she then uses to further her claims to owning dynasty founder Lang Hancock’s iron ore tenements, it will effectively dismantle the $20 billion equity-rich mining company Hancock Prospecting (HPPL). It is a claim the daughter denies.

Present in court last week were Supreme Court Justice Rene Le Miere, TV screens beaming three barristers representing both generations of Rineharts, as well as Hancock Prospecting, from their offices in Sydney and a handful of observers – including this reporter.

It was a small affair, where only one week earlier, seated in the same courtroom placed high atop Perth’s skyline, commanding million-dollar views of the Swan River, sat a roomful of sharply suited lawyers oblivious to their surrounds as more valuable real estate 1200 kilometres away looked to go under the gavel. 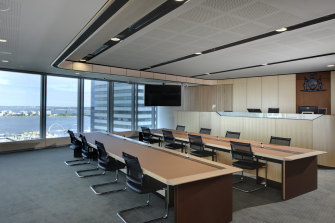 Testing the waters: Hearings over Western Australia’s ‘clash of the dynasties’ have sat in the David Malcolm Justice Centre courtrooms, which command stunning Swan River views.

Legal arguments over the framing of next year’s trial into the rights and royalties of Pilbara mine Hope Downs – Lang’s most-prized multibillion-dollar iron ore tenement – were wrestled by four interested parties, with a fifth, Rio Tinto, also paying heed to what may become of its Hancock joint venture.

Wright Prospecting, once belonging to Lang’s former business partner Peter Wright and passed on to his dynasty, wants equal share with Hancock in Hope Downs, while DFD Rhodes, belonging to late engineer Don Rhodes’ estate, is seeking a comparatively minor royalty that will pay millions.

But those claims pale into insignificance when compared to the outright ownership of Hope Downs sought by the younger Rinehart, together with her brother John Hancock, in what they say is their rightful inheritance under the Hope Margaret Hancock family trust, established in 1988 – four years before Lang’s death.

Bianca Rinehart’s counsel Christopher Withers SC accused Australia’s richest mining magnate in open court of defrauding the trust of Hope Downs and other assets for her own benefit through a series of complex agreements and deeds to her company Hancock Prospecting.

Hancock Prospecting’s senior counsel Noel Hutley “vehemently denied” the claim and in turn accused the siblings of greedily seeking the company’s most valuable iron ore asset, Roy Hill, as part of the trial. It was an assertion quickly rejected by Mr Withers since any blurring of the lines could see them dismissed from the Hope Downs Supreme Court action.

But the allegation was again put to Justice Le Miere when barrister Christian Bova SC fought the daughter’s bid last week to uncover court-tendered testimony that she claimed may help “investigate” any misstep by Mrs Rinehart during her time as trustee to the family trust.

Bianca Rinehart has applied to the court for any affidavits relating to a lawsuit in which Lang’s solicitor Carnegie Fieldhouse was accused by Gina Rinehart, via the family foundation, of helping her late father commit a corporate fraud to write-off millions of dollars in personal debts just before his death in 1992. The lawsuit failed more than 20 years later.

Mr Fieldhouse also testified in separate federal court proceedings that declared Mr Hancock’s estate bankrupt and essentially cut off his younger widow and former cleaner Rose Porteous. Mrs Porteous spent years fighting in the court after similarly accusing Mrs Rinehart of defrauding the estate for her own benefit, but was not successful.

Mr Bova argued that Bianca Rinehart was seeking the documents for “improper purpose” and they should be withheld until there was a known result in the confidential Federal Court arbitration, where the family’s internal squabble continues to play out.

He said it was the responsibility of the court to supervise the administration of the trust, which fell to the younger Rinehart as trustee but who had a clear conflict of interest since she would personally benefit from stripping Hancock Prospecting of its most valuable assets.

“If those claims succeed, the value of HPPL and its shares will reduce dramatically,” he told the court.

“And given the principal asset of HMH Trust is a significant shareholding in HPPL, so the success of Bianca’s personal claims cannot be in the interests of HMH Trust.”

It was a clever circular argument that rang some alarm bells with NSW Chief Judge in Equity, Julie Ward, when she handed down her judgment to delay the release of corporate files relating to the trust held by Mrs Rinehart and the company after a similar attempt by Bianca late last year.

It was revealed most recently in court that Hancock Prospecting uncovered some 27,000 documents in its possession, according to the search terms provided by Mrs Rinehart’s daughter, but sifting through those documents as to actual their relevance to the trust would cost around $300,000 in estimates by Mrs Rineharts’ solicitors. Even then, Mrs Rinehart has to approve their release.

It proved another dead end in a long standoff over corporate information sharing that is understood to also be occurring before specially appointed federal court arbitrator Wayne Martin QC.

And it is behind those closed arbitration doors, where Hancock Prospecting would prefer all matters to be argued.

In fact, further arbitration involving DFD Rhodes has been floated as a way of being rid of Bianca and John from the Supreme Court action, effectively whittling the Hope Downs trial to a good old fashioned gun-sling between Hancock and Wright.

Justice Le Miere, who has reserved his decisions, will be up against it as he has been reminded of the High Court of Australia’s decision to endorse confidential arbitration as a preferred method of settlement.

He will also not wish to step too far outside the NSW judge’s decree, despite it being in a separate jurisdiction and the handful of files most recently sought relating to his own court hearings rather than being a matter of “piercing a corporate veil”.

Justice Le Miere is also aware his decision may spawn a web of further court hearings that may delay trial, since he has sat through most of the Hope Downs hearings over the decades, but he will wish to see justice done for all parties.

And when it is all said and done, Bianca’s counsel Adam Hochcroft has a point that refusing her “would have the absurd result that an ordinary member of the public who wished to gain better understanding of these proceedings would be able to obtain access via the court file”.

“And to put it one way, Ms Styles, who appeared before your honour on behalf of Nine and WAtoday, on this reasoning may be able to obtain access to these exact documents which we seek, but Bianca would not be able to access,” he said.