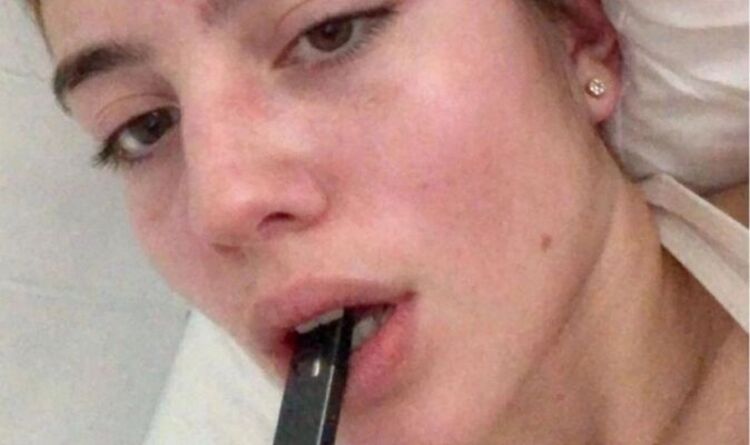 Smoking and vaping: NHS shows difference between the two

Vanessa von Schwarz, 20, began vaping when she was 15 years old after many of her friends at school took up the habit. She said it wasn’t long before she was addicted to her e-cigarette and would become anxious and nauseous if she went too long without using it.

She later suffered extreme side effects including muscle pain, difficulty lifting her limbs and black outs causing her to collapse.

Ms von Schwarz said her case is “an example of how detrimental these legal substances can be”.

She said: “For some reason when I started vaping, naivety assured me my whole life was changing.

“I felt like it gave me something I didn’t have before; I was thinner, more confident, and I was sure this new me was all thanks to this little metal device I carried in my pocket.

“I struggled with a lot of anxiety, and I would consistently look at the vape thinking it was the only thing there for me at all times. That was comforting for me and made letting go even harder.

“All the cool girls vaped. It tasted like candy.”

The model and film student, from Los Angeles, started experiencing weakness in her legs and arms in 2017 soon after she began vaping regularly.

She said she began experiencing side effects just two months after she began using the vape, when she blacked out and collapsed one morning.

Ms von Schwarz said: “I got out of bed that morning and instantly took a hit. After that, I woke up on the floor and I hadn’t remembered what’d happened.

“I’d clearly fainted, and I was fine, but it was so odd because that had never happened to me in my life.”

She said that from then on she would always feel weak at the knees and her fingers and toes went numb after using her vape.

She could also feel her heart race when she used the e-cigarette and, in 2018, she developed migraines and consistent nausea if she went even a few hours without a hit.

The model, who is studying filmmaking at The New York Film Academy, said she did her best to shrug off her symptoms until she got a job as a stylist and had to be on her feet for up to nine hours at a time.

Her symptoms soon became much worse, to the point where she struggled to lift her arms or head when lying down.

She said: “On top of the consistent migraines and nausea, I suddenly was unable to bend my legs fully without being in an immense amount of pain.

“I would come home from work in absolute agony, crying because of how badly my legs ached.

“My upper body became weaker and weaker, and as my legs grew weak and sore, so did my arms and fingers.

“It began to hurt just putting my hair in a ponytail, or even holding a water bottle was too heavy for my hands.

“I couldn’t lift my neck up when I was laying down, and when I’d fall because my legs would give out due to weakness, I couldn’t get up from the ground.”

Doctors were alerted to her condition in 2019 after she tripped and injured her head.

At first, medics concluded she must have come into contact with a toxic substance before the teenager came clean about her vaping addiction.

She explained: “I had to have a serious conversation with myself about whether or not I was ready to let this addiction go, and I thought bringing up vaping to the doctors would get rid of any paranoia I had about my vape.

“Once they knew how excessive the use was they immediately advised me to stop, stating there was not enough research to know how vaping can affect the body.”

She was later discharged from hospital but didn’t stop vaping until a year later.

Ms von Schwarz has now finally kicked the habit but still lives with the lasting effects of dermatomyositis, which causes muscle pain, swelling and rashes.

She said: “I hope there could be more awareness and action taken against teens vaping, especially in schools.

“Despite the intention, the effects on the body can be severe and my case is not the first or the last of this kind.”

Her father Dr Ernst von Schwarz, 60, is a clinician researcher and believes his daughter’s side effects are “most likely” caused by excessive vaping from a young age.

He has written a report on his daughter’s experience.

She hopes her case will highlight the dangers of vaping and the serious consequences of e-cigarette addiction.

She said: “Anyone who may be struggling with any sort of addiction, please know there is help.

“It’s a common misconception to believe nicotine is a small, minor addiction, and while that can be true for a lot of people, there are still those remaining that depend on the substance for their happiness, when it is incredibly short lived.

“I hope you will not let any addiction take over your body’s health, because the effects are irreversible.”