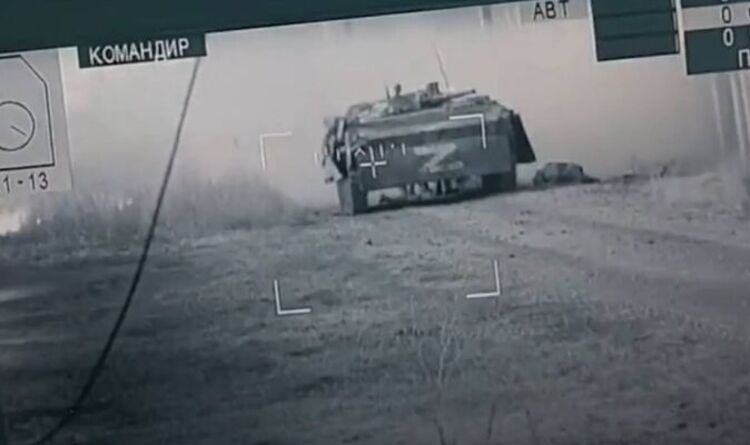 Footage circulating on social media reportedly shows a Ukrainian BTR-4 armoured vehicle engaging two Russian BMPs, also an armoured vehicle, through the viewpoint of a screen inside. The video sees the BTR-4 lock onto its Russian target, marked with the infamous “Z”, before firing. The Russian target is destroyed in a few seconds – with the loud cannon firing at it until flames and smoke billow from its remains.

The 48-second video shows a Ukrainian crew navigating an urban setting and spotting several Russian targets on its targeting screens.

The first engagement shows the BTR-4 shoot between telephone poles.

The second shows a more close-up engagement of a Russian vehicle clearly marked with “Z” as it is repeatedly hit by shots.

The Russian target does not seem to fire back at the Ukrainians and appears to flee – but fire from the autocannon pierces through the armour, causing it to explode.

It is believed the video is from the Ukrainian Azov Battalion after it was shared online with the caption “Z means DESTROYED”.

The Azov Battalion has gained notoriety for its neo-Nazi and far-right ties and was originally made up of several hundred volunteers before being welcomed into the Ukraine National Guard.

Vladimir Putin has pinpointed the battalion as one of the motives behind his “special operation” in Ukraine where he claims he is attempting to overthrow the “neo-Nazi” regime of the country.

Russian forces have ramped up their assault on Ukrainian cities as Mariupol is besieged by troops.

An evacuation convoy of around 160 vehicles has been allowed out of the city.

Despite the sieges, Russia is struggling to push through the Ukrainian defences as their quick invasion has dramatically slowed down.

Ben Hodges, former United States Army Lieutenant General, spoke to LBC about the issue. He said: “The Russians have a serious challenge here, first of all, let me say Ukraine is going to win when this smoke clears, when this is all said and done, Kyiv will not have been taken.

“You can see that the Russians are having a hard time holding on to Kherson, they still have not captured Mariupol or Kharkiv which should have been the two easiest for them to take because of the location and proximity to their navy.

“But the Russians have made the decision to transition to attrition, which means you have to have endless time, endless ammunition, and endless manpower and they don’t have any of those three.

“In fact, I bet that most of the major cities that are either now taken or encircled will also not be taken.”

Reuters also reports the Chief of Russia’s National Guard, Viktor Zolotov, has admitted the war is not going Russia’s way.

He is reported as saying: “I would like to say that yes, not everything is going as fast as we would like.”