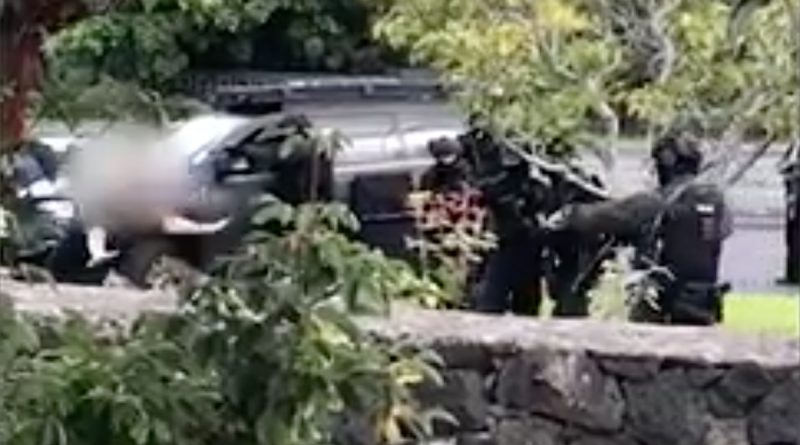 There were at least a dozen squad cars flashing on their kerb but they hadn’t heard a thing.

A few minutes later the household in the Auckland suburb of Mt Albert captured a “young man” surrendering to dozens of police officers holding assault rifles and holding back barking police dogs.

“Walk towards me nice and slow, keep those hands where I can see them,” the armed officer shouts at the shaking man, whose arrest is filmed in footage supplied to the Herald.

A man was taken into custody about 5pm today after fleeing from police by car in Auckland city and barricading himself in a house on St Lukes Rd and threatening to be carrying a firearm.

“To be honest I didn’t even have any idea it was going on until they were quite far into it,” Lawson said.

“No commotion, there was no sound on any of the sirens, so they obviously approached with them not on.

“One of our flatmates had a shower and they could see the lights flashing from the bathroom window, and then we looked out the window and we like ‘oh my god, this is all going on and we had no idea’.”

The 32-year-old said a loud speaker conversation with police eventually led to the man exiting the house she says is well known in the neighbourhood.

“They [police] were just asking for his phone number to try to call him and he was like ‘I don’t know my phone number’ and I think they must have finally got the home phone number and they were talking to him on the phone but you couldn’t hear anything,” Lawson said.

“I mean I don’t know them personally [neighbours at that address]. There are people coming and going all hours of the day and night.”

Lawson says after the man’s surrender on the footpath, the armed officers eventually “forced their way into” the home on St Lukes Rd after no reply from others in the house.

“Then the police just packed up very quickly and left. I live with two other girls. I’m actually moving out in two weeks so feeling kind of good about that,” Lawson laughed.

The arrest comes after police approached a suspicious vehicle in Whitaker Place in central Auckland to speak with the driver about 2.30pm today.

Before officers could speak with the driver, he fled the area.

This vehicle was not pursued by police. After inquiries, the driver was later located at a Mt Albert address.

At the address, the man had barricaded himself inside the property and made threats that he was in possession of a firearm.

“Members of the armed offenders squad, along with the Police Eagle helicopter, were deployed to the area given the nature of the incident,” police said in a statement.

“Police had been negotiating with the man and a period later he walked outside of the property where he was taken into custody without further incident.”

Armed offenders squad members cleared the address and at this stage no firearm had been located.

A section of St Lukes Rd was closed between the intersections of New North and Taylors Rds because of the ongoing operation.

Cordons have since been lifted.