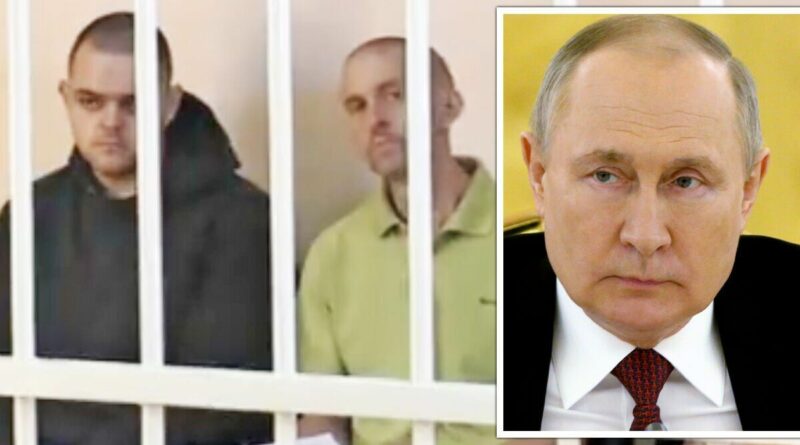 Aiden Aslin, 28, was sentenced to death alongside Shaun Pinner, 48, and Morrocan national Brahim Saaudun, 21, on charges of terrorism and acting as mercenaries by a Russian-backed court in the self-proclaimed province of Donetsk after a three-day show trial. And the only man who is able to pardon the trio has said he sees no grounds to, meaning their death sentences are still set to go ahead.

The leader of Putin-backed separatist Donetsk People’s Republic (DPR) is likely to hear pardon pleas from the group.

But Denis Pushilin has preempted the legal process in the puppet state to suggest he will not grant clemency.

He said: “With the mercenaries, two British, one Moroccan – there was a court hearing, a direct court hearing, they were given lawyers…. Their crimes can be classified as grave and especially grave crimes.

“It was easy enough to predict…that they should be sentenced to capital punishment. My personal opinion is that this is just punishment for those people who came to kill civilians for money from other countries.”

The trial the group faced was riddled with questionable legal tactics, including the non-appearance of five witnesses on whose word they were convicted.

Aslin’s family said he and Pinner “are not, and never were, mercenaries”.

They were living in Ukraine when war broke out and “as members of Ukrainian armed forces, should be treated with respect just like any other prisoners of war”, the family said in a statement.

Under international law it is part of Ukraine, which does not carry out the death penalty, just as Russia does not.

Though the Ukrainian separatist region has links to Putin’s Kremlin, Russian Foreign Secretary Sergey Lavrov has dismissed any involvement from Russia in the verdict.

He said: “At the moment, the trials you mentioned are being held on the basis of the legislation of the Donetsk People’s Republic, because the crimes in question were committed on the DRP’s territory.”

Mr Lavrov added: “I’d rather not hinder the operation of the judiciary and law enforcement authorities of the Donetsk People’s Republic.”

Both Ukraine’s advisor to interior minister Vadym Denysenko and war observers believe Putin’s Russia is trying to leverage the death sentences to extract concessions from the West and the ongoing negotiation process with Ukraine.

After the verdict, Mr Aslin said he had hoped the sentence would be “a lot fairer.” I wish it could be different but God will be the one that will judge me when the time comes”, Mr Aslin said.

In an effort to secure the release of the two British fighters, Foreign Secretary Liz Truss has held phone calls with her Ukrainian counterpart.

The option of exchanging Russian soldiers with the two UK nationals is on the table.

Secretary Truss said: “The judgment against them is an egregious breach of the Geneva convention. The UK will continue to back Ukraine against Putin’s barbaric invasion.”