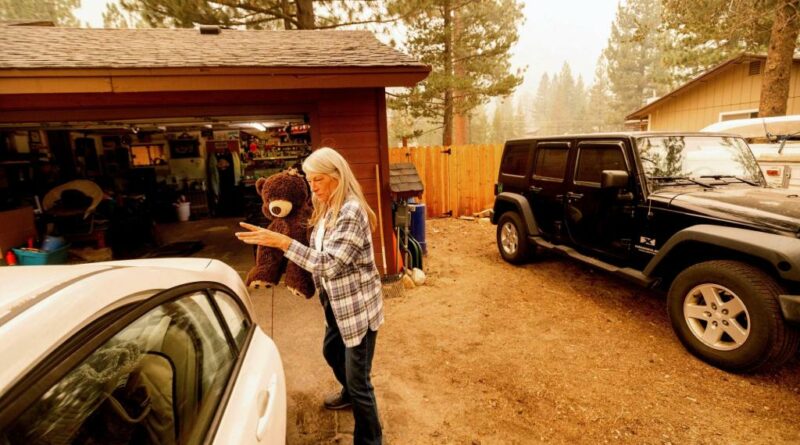 SOUTH LAKE TAHOE, Calif. — Spiking temperatures and increasing winds on Sunday added to the challenges faced by firefighters battling blazes across Northern California, including one that continued its march toward the Lake Tahoe resort region.

“It is going to be the hottest day so far since the fire began, and unfortunately, probably the driest,” said Isaac Lake, a spokesman for the two-week-old Caldor Fire.

Flames churned through mountains just a few miles southwest of the Tahoe Basin, where thick smoke sent tourists packing at a time when summer vacations would be in full swing ahead of the Labor Day weekend.

Triple-digit temperatures were possible and the extreme heat was expected to last several days, Lake said. A red flag warning for critical fire conditions was issued for Monday and Tuesday across the Northern Sierra.

“It’s so dry out there that when embers blow out into the unburned fuel beds, the probability of ignition is 90 percent,” Lake said.

The blaze that broke out August 14 was 19% contained after burning nearly 245 square miles (635 square kilometers) — an area larger than Chicago. More than 600 structures have been destroyed and at least 18,000 more were under threat.

The Caldor Fire has proved so difficult to fight that fire managers pushed back the projected date for full containment from early this week to Sept. 8. But even that estimate was tenuous.

In Southern California, a section Interstate 15 was closed Sunday afternoon after winds pushed a new blaze, dubbed the Railroad Fire, across lanes in the Cajon Pass northeast of Los Angeles.

Further south, evacuation orders and warnings were still in place for remote communities after a wildfire broke out and spread quickly through the Cleveland National Forest on Saturday. A firefighter received minor injuries and two structures were destroyed in the 2.3-square-mile (5.9-square-kilometer) Chaparral Fire burning along the border of San Diego and Riverside counties, according to the California Department of Forestry and Fire Protection. It was 10% contained Sunday.

Meanwhile, California’s Dixie Fire, the second-largest in state history at 1,193 square miles (3,089 square kilometers) was 48% contained in the Sierra-Cascades region about 65 miles (105 kilometers) north of the Caldor Fire. Nearly 700 homes were among almost 1,300 buildings that have been destroyed since the fire began in early July.

Containment increased to 22% on the 12-day-old French Fire, which covered more than 38 square miles (98 square kilometers) in the southern Sierra Nevada. Crews protected forest homes on the west side of Lake Isabella, a popular recreation area northeast of Bakersfield.

More than a dozen large fires are being fought by more than 15,200 firefighters across California. Flames have destroyed around 2,000 structures and forced thousands to evacuate this year while blanketing large swaths of the West in unhealthy smoke.

The California fires are among nearly 90 large blazes in the U.S. Many are in the West, burning trees and brush desiccated by drought. Climate change has made the region warmer and drier in the past 30 years and will continue to make the weather more extreme and wildfires more destructive, according to scientists.

The Department of Defense is sending 200 U.S. Army soldiers from Washington state and equipment including eight U.S. Air Force C-130 aircraft to help firefighters in Northern California, the U.S. Army North said in a statement Saturday. The soldiers are expected to arrive in California in early September after a week-long training. The C-130s have been converted into airtankers that can dump thousands of gallons of water on the flames.

Click markers for details, use buttons to change what wildfires are shown. Map data is automatically updated by government agencies and could lag real-time events. Incident types are numbered 1-5 — a type 1 incident is a large, complex wildfire affecting people and critical infrastructure, a type 5 incident is a small wildfire with few personnel involved. Find more information about incident types at the bottom of this page.