The America’s Got Talent judges are known for their pranks, most notably last season when Simon Cowell pretended to be fatally struck in the chest with an arrow and nearly scared his co-star Sofia Vergara to death in the process. But this week, it was a contestant that did the pranking — and it was an expert prank, because it turned out this particular “contestant” had a lot of experience on the AGT set.

On Tuesday, about halfway through America’s Got Talent Season 17’s third auditions episode, creepy cosplayers/TikTok challengers Monique and Stefani — collectively known as Duo Rag Dolls — skipped onstage looking like the ugly stepsisters of Melanie Martinez or The Night Before Christmas’s Sally, with their Harajuku Girl pinafores, Crystal Methyd-from-Drag Race clown paint, pastel Sia wigs, giant Hello Kitty hair bows, and Kardashian-esque vocal fry. The self-declared “ultimate influencers” drawlingly promised, “What we do is very creatively beautiful and extremely unique” and “like Broadway,” and they certainly piqued the judges’ interest. But when they started aimlessly mincing about the AGT stage to Britney Spears’ “Toxic” with their jumbo lollipops and man-sized Care Bears, none of their seemingly unrehearsed act was very influential or beautiful, and they therefore the bizarre duo received four red X’s and several rounds of audience boos.

“If someone would have showed up at rehearsals last night, it would have been a lot better,” Stefani grumbled passive-aggressively, throwing her lavender-wigged bestie under the proverbial bus. “You’re not going to, like, blame me right now,” Monique sassed back, although she did admit she was “a little off” during Duo Rag Dolls’ childish routine. “You were terrible. You were absolutely terrible,” Stefani countered, at which point Stefani and Monique started tossing each other around like, well, rag dolls. And that was when their shtick actually became entertaining. 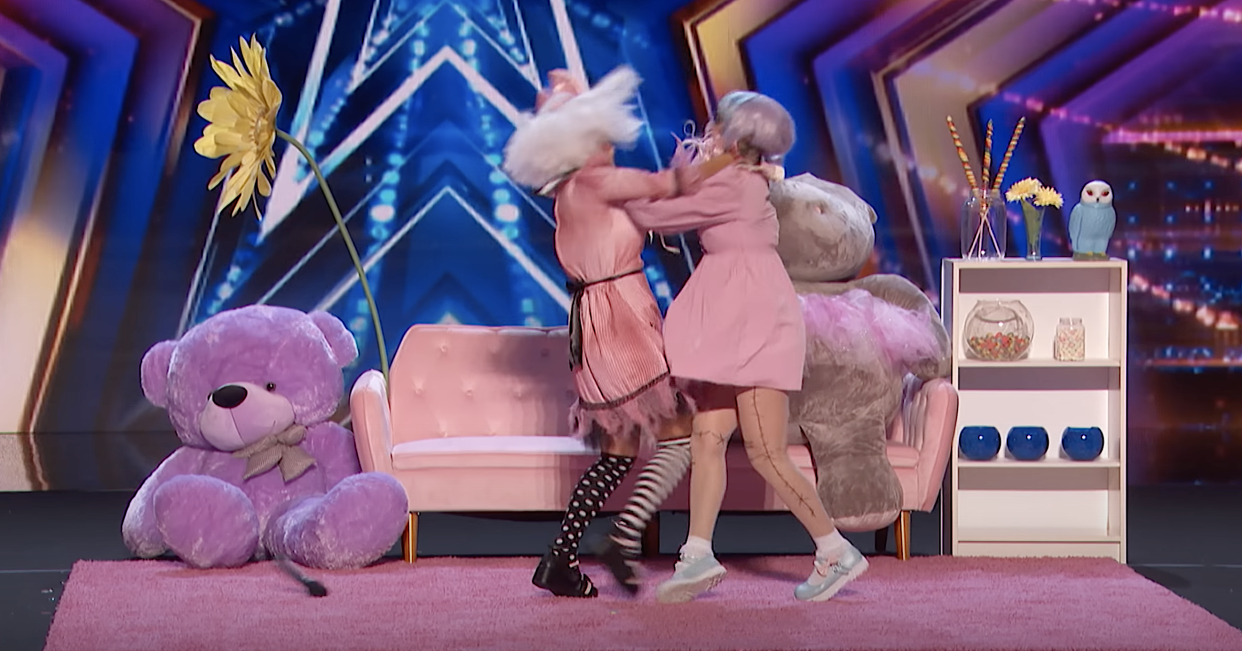 As the wigs literally went flying and the girls tumbled out into the audience, body-slamming themselves onto Simon’s judging desk and setting off his red buzzer repeatedly, one of them met Simon’s befuddled gaze and barked, “Was that extreme enough for you?” And that was when Simon recognized that the Duo Rag Dolls were — in a big reveal worthy of The Masked Singer— former AGT: Extreme judge/professional wrestler Nikki Bella and her twin sister, fellow WWE wrestler Brie Bella.

“You are very naughty, you two,” chuckled Simon, as he changed his “no” to a “yes.” It’s too bad this was all one big hoax: I mean, what drunken Las Vegas tourist wouldn’t want to watch the badass Bella Twins, dressed as Bratz dolls, brattily beating each other up to pastel-pink pulps? This was a million-dollar act!

Well, Duo Rag Dolls won’t be advancing to the next round, obviously, but there was an even scarier living doll who will be: Ten-year-old British screamo/metal singer Harper Akudama, who looked like an angel until she opened her mouth and out roared the impressively fearsome voice of a monster (or Cookie Monster). “That was brilliant. It was like a mouse turning into a vampire bat,” marveled Simon, who’s apparently a closet metal fan.

So, Harper made it the next round, alongside other young talent like 18-year-old Australian contemporary dancer Max Ostler (who Simon called “the Harry Styles of dance”) and 13-year-old Eurovision Junior/The Voice Poland alumnus Sara James, who earned Simon’s Golden Buzzer. That leaves only two Golden Buzzers — Heidi’s and Sofia’s — left in play, so tune in next Tuesday to see more auditions, and to see if any other mystery celebrities show up in Raggedy Annie disguise.