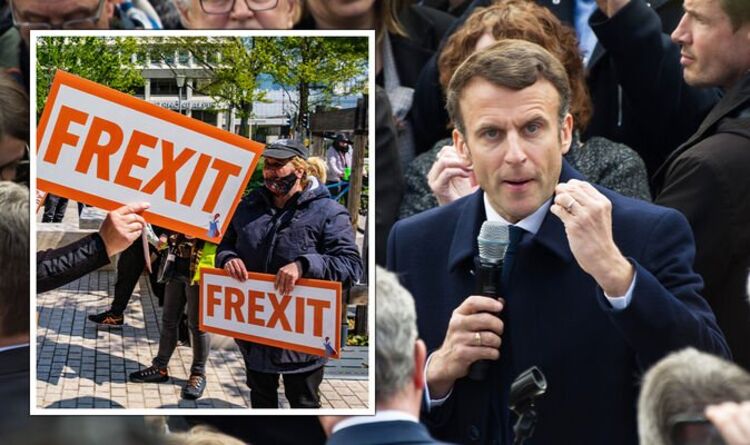 The first round of voting in the crunch French election begins tomorrow against the backdrop of Russia’s continued war in Ukraine. Emmanuel Macron has been tipped to come out on top and beat far-right political rival Marine Le Pen to win a second five-year term as President. In Europe, he is often seen as a key European Union figurehead – particularly since former German Chancellor Angela Merkel stepped away from frontline politics at the end of last year.

A win for the current French President would be seen by many as a major blow to Frexiteers, who have been campaigning for France to follow the UK and leaver the EU.

But Generation Frexit President Charles-Henri Gallois has vowed such an outcome from the election will not derail the movement’s plan.

He told Express.co.uk: “As patriots, we will continue to fight to have this referendum on EU membership.

Fellow Frexiteer Eric Noirez warned an election win for Mr Macron would “push France into an even more critical and vulnerable situation” in regards to issues around its independence.

But on the flip side, he argued the re-election of the current French President could in fact help the Frexit campaign.

Mr Noirez told ExPress.co.uk: “At the risk of surprising, I think that a re-election of Macron could paradoxically favour the campaign for Frexit.

“Why? Because Europeanists like Macron are fanatical people and the more they will practice the headlong rush in their Eurofederalist delirium, the more the price to pay and the harmful consequences for the French will be strong and visible.

“On the other hand, the question of the democratic legitimacy of the European project cannot be left unanswered indefinitely.

“Macron cannot eternally transfer entire and decisive parts of popular sovereignty without the French people having a say.”

He also pointed to a recent poll commissioned by Generation Frexit which showed just under two-thirds (63 percent) of French people questioned were in favour of a Frexit referendum taking place.

Similarly, 65 percent of those polled said they would like more national sovereignty.

Mr Noirez added: “These figures are very revealing and I have no doubt that they would increase further if Macron were to resume his role as the great deconstructor of France for another five years.

“Moreover, the opposition forces will, in my opinion, increasingly have to consider the question of a referendum on whether France should leave or remain in the EU.

“Because the need for it will become more and more obvious in view of the changing political conditions and the European project desired by Macron.

“Let us also recall that Macron himself admitted on the BBC that if the French had the opportunity, they would probably vote like the British to leave the EU.”

A new poll has revealed Mr Macron is on course to win the French presidential election later this month, although Ms Le Pen has gained ground in recent weeks.

The Ipsos Sopra Steria Cevipof poll for Le Monde newspaper showed he would lead in the first round of votes on April 10, with 26.5 percent versus 21.5 percent for Ms Le Pen in second place.

Those figures compared to 28 percent for Mr Macron and 17.5 percent for his political rival in the last poll conducted from March 21-24.

The current French President would then beat Le Pen in the second round run-off vote on April 24 by 54 percent to 46 percent.