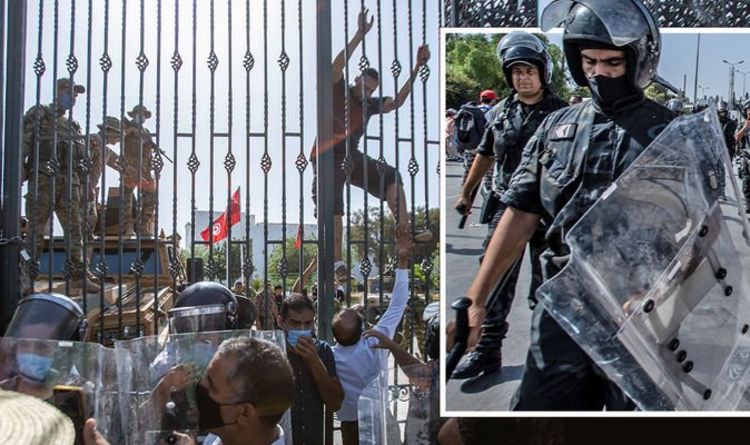 The North African country’s political crisis last night threatened to boil over after President Kais Saied ousted the government and pledged to consolidate power and “save” the country by installing a new prime minister. His move came on the back of a day of protests against the government and the biggest party in parliament, Ennahda.

Hundreds of Tunisians took to the streets rallying against politicians’ handling of the Covid pandemic, following a recent spike in infections.

There is also growing disquiet in society about the chronic political dysfunction and economic woes blighting the country of 11.7 million.

President Saied warned his opponents and critics any shots fired would be met with lethal force.

He said: “Whoever shoots a bullet, the armed forces will respond with bullets.”

Constitutionally, the president is only directly responsible for military affairs and foreign relations.

However, last week President Saied instructed the army to take over at the helm of the country’s battle with Covid.

This came after Prime Minister Hichem Mechichi sacked the health minister and said he was to blame for the collapse of the healthcare system.

On Monday clashes between rival groups continued on the streets of Tunisia.

President Saied enjoys support from a vast array of communities in Tunisia, including Islamists and Leftists.

The country is now facing its worst crisis in a decade following months of deadlock and disputes which pitted the president, a political independent, against the prime minister.
Parliament Speaker Rached Ghannouchi, the head of the moderate Islamist Ennahda party which has played a role in successive coalitions, decried the president’s move as an assault on democracy.

He urged his fellow Tunisians to take to the streets in opposition.

Mr Ghannouchi labelled Saied’s decision: “a coup against the revolution and constitution” in a phone call to Reuters.

The clashes between rival factions protesting outside parliament saw stones hurled from one group to another.

Multiple injuries were reported, and one man was pictured sitting on a pavement bleeding from the head.

The military has yet to comment on President Saied’s move.

This morning soldiers were deployed to the government palace in the Kasbah and stopped workers from entering the building.

The 80-year-old had said he would call a session in defiance of the president.

Standing in front of the locked gates, he told reporters: “I am against gathering all powers in the hands of one person.”

In a statement issued late last night, President Saied invoked the constitution to dismiss Prime Minister Mechichi and decree a freeze of parliament for 30 days.

He said he plans to govern alongside a new premier, but did not say when he would appoint them.

Sources have said Mr Mechichi — also an independent — is at his home and not under arrest.

The new crisis engulfing Tunisia poses the greatest risk to its stability since the 2011 revolution that triggered the “Arab spring” and ousted an autocracy in favour of democratic rule.

Ten years on, the changes have failed to deliver sound governance or prosperity for Tunisians.