Chloe Melas, a reporter for CNN, broke a major story Thursday: After an investigation that took six months, she reported that several women were accusing actor Morgan Freeman of sexual harassment. The improper behaviour ranged from unwanted touching to suggestive comments that made women feel uncomfortable.

But the initial tip did not come from a phone call, email or letter. It came from Melas herself.

She had been sent to cover a publicity event last year for "Going in Style", a film starring Freeman, Michael Caine and Alan Arkin. Melas, who was pregnant at the time with her son Leo, said that Freeman looked her up and down and made several remarks along the lines of "I wish I was there", one of which was captured on video. She reported the incident to CNN, which then informed Warner Bros., the studio behind the film. Warner Bros., which like CNN is a division of Time Warner, responded later that it could not corroborate the account because only the one comment was recorded and other Warner Bros. employees said they had not seen anything.

Before beginning her maternity leave, Melas, a 31-year-old Atlanta native who has covered entertainment for several years, heard rumblings about Freeman's behaviour with other women, she said. When she returned, she began pursuing leads on Freeman just as the #MeToo movement started taking off.

It is rare for reporters to become part of their own stories, but Melas' article was not the first of its kind in recent months.

Last November, Laura McGann, an editor at Vox, wrote an article about her interactions with a New York Times reporter, Glenn Thrush, as well as those of other women, all accusing him of inappropriate behaviour. Thrush disputed McGann's characterisation of their encounter; after investigating the accusations in the article The Times said he had "behaved in ways that we do not condone" and Thrush ultimately was suspended for two months.

Melas co-reported her article with An Phung, an editor at CNN. Indira Lakshmanan, chairwoman for journalism ethics at the Poynter Institute, said in an email that Melas' reporting on Freeman did not cross any ethical lines because the article "fully disclosed her status as an alleged victim and documented in details the steps she took trying to complain and address it". She added that it might have been even better if CNN had placed an editor's note atop the article.

In a statement after Melas' article was published, Freeman said, "I apologize to anyone who felt uncomfortable or disrespected — that was never my intent." He issued a second statement Friday in which he again apologised but disputed that his behaviour had created a "toxic" environment at his production company, as employees had said in the CNN article. 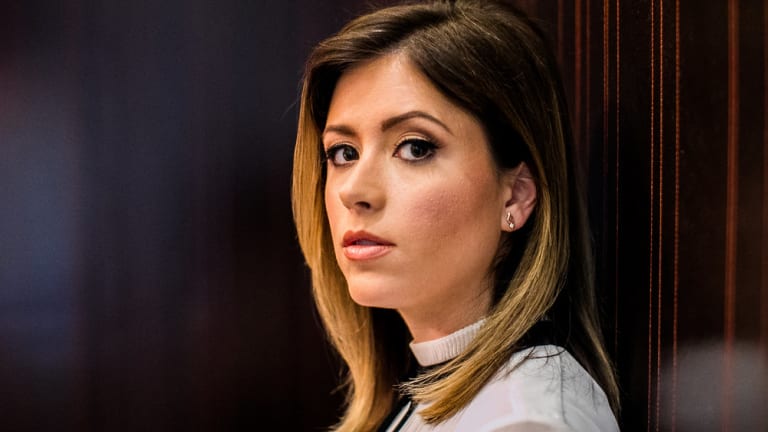 Chloe Melas, the CNN reporter who wrote about allegations against Morgan Freeman.

Melas spoke to The Times about her experience with Freeman and the decision to report on it. These are edited excerpts from the conversation.

Q: Had you ever been harassed on assignment before?

A: It might sound hard to believe because I've interviewed nearly every big name you can think of on red carpets, junkets, sit-downs, formal and informal settings, after-parties. I've never had anyone truly overtly cross the line. Not till Morgan Freeman. That's why it stood out to me.

Q: What led you to decide to report on it?

A: That same day that he made those comments to me, I shared them with some family and friends, because I was shocked. It was a friend of mine that told me a story about someone she knew that had something happen with Morgan Freeman. And then I was told that person wouldn't feel comfortable sharing their story. That next week, I started digging around. I started calling people who had worked on some recent films of his. I reached a woman who shared a story with me about some inappropriate behaviour but at the end of the call, she told me she didn't want to share it for publication.

After learning those stories I couldn't report out, it definitely made me think there's more here.

Q: Was there any resistance at CNN to your doing this?

A: I was told: "Go for it. If you have anything, we can discuss it." I started reporting it out and locking myself in a conference room and just calling people who had worked on all of Morgan Freeman's films. I got several people to share their stories with me and after, I went to my editors and I said, "This is what I have." They said, "Wow, OK." That's when they said, "We are going to assign An Phung to report this out with you."

Q: As you were calling people, did you use your own experience with Freeman to break the ice?

A: I did share my experience with several people but it was all determined on the flow of what we were discussing. If this person was a victim, and I felt like it was appropriate to share parts of what happened to make them more comfortable in sharing certain things that are difficult and painful to relive and highly emotional, then I want to be a relatable ear.

Q: Did CNN set any guidelines for tasks that only An was allowed to do?

A: There were not any guidelines but An and I decided together that it would be the right thing to do for her to be the one to reach out to Morgan Freeman's team and to Michael Caine's team and to Alan Arkin's team for comment. So I recused myself from that.

Q: Was there any concern that all the women, except the WGN producer that you had, would not go on the record with their names?

A: Obviously we know these people and we know their names. We know where they worked. We know how long they've worked there. We have corroboration through different types of proof that they're able to give us and speaking to friends and family members and co-workers and former colleagues.

A lot of these are not just one-time interviews. These were multiple interviews over months and months and going back and re-corroborating. There's a very strict process in sourcing.

Q: What did you think of Warner Bros. response when your Freeman encounter was reported to them last year? Did you think that the video and your own account should have been enough?

A: I went to my supervisor with what had happened, not ever expecting to go to human resources. I was told I needed to go to HR. So when I went to HR and shared with them what had happened, that was it. I wasn't doing it for an apology. When I came back from maternity leave and circled back just to see what conclusions they had come to, and when I was told that Warner Bros. couldn't corroborate it, I didn't understand why.

Q: Did the Harvey Weinstein story spur you to do this one?

A: I wish I could say it did but it didn't. My incident happened pre-#MeToo. I wanted to look into Freeman because I thought about it my entire maternity leave.