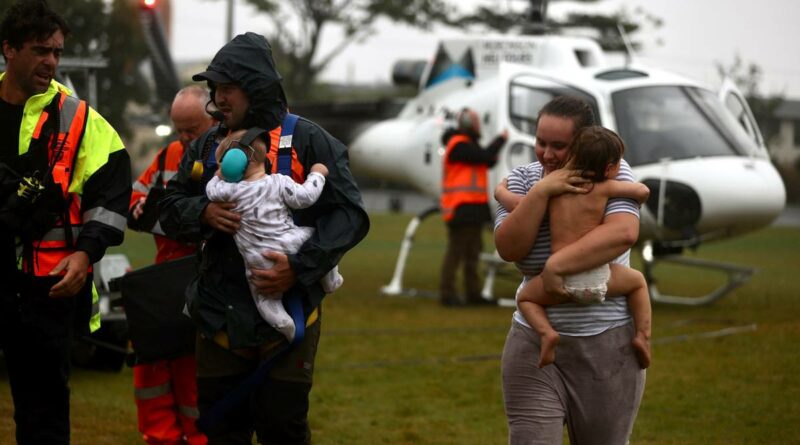 A West Coast family of four huddled on top of a tractor from rising floodwaters have been rescued by helicopter as rain hammers the region.

The mother and two young children in nappies were helped off the helicopter at the flooding response operations centre at the rugby grounds in Westport.

The small children were crying but the mother was relieved and smiling.

The pilot who rescued the family, Rob Hunt, said the kids who were rescued were “cold, wet and a bit stressed out”.

“The six-month-old was one of the best passengers I’ve ever had,” Hunt said.

He said it was rewarding to do that sort of work.

“It’s good to see them smiling at the end of it and back to somewhere safe and warm.”

A search and rescue operation was launched this afternoon by emergency services, dealing with the rising threat of torrential rain and flooding around the town of Westport on the South Island’s West Coast.

At around 3pm they were alerted to a family of four – two adults and two children – who were last seen on top of a tractor.

Rivers are flowing high and a dam has reportedly burst in the area, while hundreds have been evacuated from Westport to higher ground.

Fire, police, and search and rescue teams were deployed in the search.

A helicopter was also scrambled to try to airlift the stricken family.

A police spokeswoman said the helicopter reached them at 3.41pm and they were flown to safety just minutes later.

There are no reports of injury.

SAR are on the scene in a jetboat and are now checking the area to make sure nobody else needs assistance.

At a 4pm press conference, the latest modelling suggested no more evacuations were needed at this stage, Buller district mayor Jamie Cleine said.

The situation will be reviewed at 6.30pm.

The Buller River, and rivers further north, were being monitored hourly, Cleine said, adding that the weather was unfolding exactly as was forecast, he said.

It wasn’t expected, at the current rate, that the Buller River would get as high as it did last July.

The peak time for the rivers and likely flooding remains around 2am to 2.30am overnight.

The mayor praised locals for self-evacuating and said about half of those who were subject to mandatory evacuations had already left.

Agriculture Minister Damien O’Connor said all the modelling so far had been accurate and he praised the preparations and response.

“Everything that can be done is being done,” he said.

Some people have chosen to stay behind – but at this stage police have chosen not to strictly enforce the mandatory evacuation order.

Heavy rain is expected to pass through overnight, and ease to passing showers by tomorrow afternoon, Cleine said.

Minister for Emergency Management Kiri Allan was due to make her way to the West Coast, O’Connor said.

People required to evacuate should take a grab bag of clothes, essential medicines and personal documents. People with pets should also take their animals.

“We advise people to go to friends or relatives on high ground if at all possible,” Cleine said.

Earlier, “heartbroken” evacuee Linda Evans was distressed to be leaving her home this afternoon, which still hasn’t been completely refurbished since it was damaged in last July’s flooding.

“It was a Christmas present to come home,” she says. “And now it will go again.”

A “very basic” evacuation facility at the former Holcim cement plant at Cape Foulwind Rd, just out of Westport, will provide food and shelter for people with no other option. They should take sleeping bags or bedding and be prepared to sleep in their vehicles, he said.

Cleine didn’t know exactly how many properties would be affected at this stage.

At 2pm, it was extended to residents of Golf Links Rd, Marine Rd, Rotary Rd, Schadick Rd, Tiphead Rd, SH67A, Brunings Rd, and Keoghans Rd, as well as all roads south of Disraeli and Stephen to Kehua, and all streets south of Craddock to Cobden, Orowaiti, Brougham and Snodgrass. It also covers the area bordered by Wakefield-Derby-Mill-Domett-Eastons-Kew-Kawatiri.