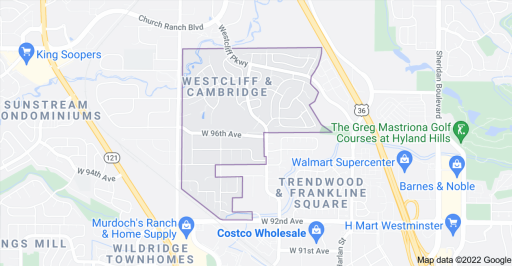 Both neighborhoods are popular with prospective buyers and feature houses built in the mid-90s that rarely turn over, says Chad Murphy, 8z real estate agent.

“You’d be hard-pressed to see more than a few homes available at a time,” Murphy says. He’s been working for four years with one buyer to find the perfect home in that area.

“People get in there and they don’t come out very often.”

The neighborhoods offer a mix of 20-year-old, two-story, and ranch homes that range in size from 1,600 to 5,000 square feet. Many have finished basements, and the most desirable homes have between 2,500 and 4,000 square feet.

Both neighborhoods appeal to first-time homebuyers and also draw some residents relocating from out of state, Murphy says. The neighborhoods also appeal to empty-nesters or grandparents who want to downsize to live closer to their grandchildren.

Murphy, who lives in neighboring Hyland Village, calls the neighborhoods attractive and convenient.

“It’s 20 minutes to downtown Denver or Boulder. It’s easy to get to work, entertainment or activities.”

While neither neighborhood offers dining or shopping options, they sit near Big Dry Creek Trail, a 12-mile trail that runs from Interstate 25 in Thornton to Standley Lake in Westminster. It also connects with the High Line Canal Trail, Walnut Creek Trail, and the Mary Carter Greenway.

Commuters can easily bike to either Denver or Boulder, Murphy says.

The neighborhoods are five minutes from Hyland Hills Golf Course. They’re also an easy walk to downtown Westminster, a mixed-use area developing on the site of the former Westminster Mall.

“I grew up spending time at the Westminster Mall,” Murphy says. “It’s been exciting to see the transformation.”

The news and editorial staffs of The Denver Post had no role in this post’s preparation.