Home » World News » What does Bronny James' path to the NBA actually look like?

During the All-Star break, LeBron James made a bold statement and let every NBA team know what it will take to get him on their roster for his final season.

“My last year will be played with my son,” James said in an interview with Jason Lloyd of The Athletic. “Wherever Bronny is at, that’s where I’ll be. I would do whatever it takes to play with my son for one year. It’s not about the money at that point.”

Bronny has been under the microscope since he hit the AAU scene the summer before eighth grade. Highlights of his performances and LeBron even joining the layup line during warmups covered the internet while Bronny was in middle school. The pressure for the son of one of the greatest to ever play the game was even apparent to James.

“I still regret giving my 14-year-old my name,” James said during an episode of his HBO TV series, “The Shop.” “When I was younger, I didn’t have a dad, so my whole thing was whenever I have a kid, I’m going to do everything that this man didn’t do. It’s up to them to take their own course, whenever that time comes.”

Even with all the pressure, Bronny has taken it well and shown glimpses of being a high-major prospect. He’s currently rated as a four-star player in the 2023 high school class. Rivals.com ranks him 30th in the country, and 247Sports has him as the No. 52 player in the class. Bronny is a little undersized as a 6-foot-2 shooting guard and has been inconsistent during his high school career so far. 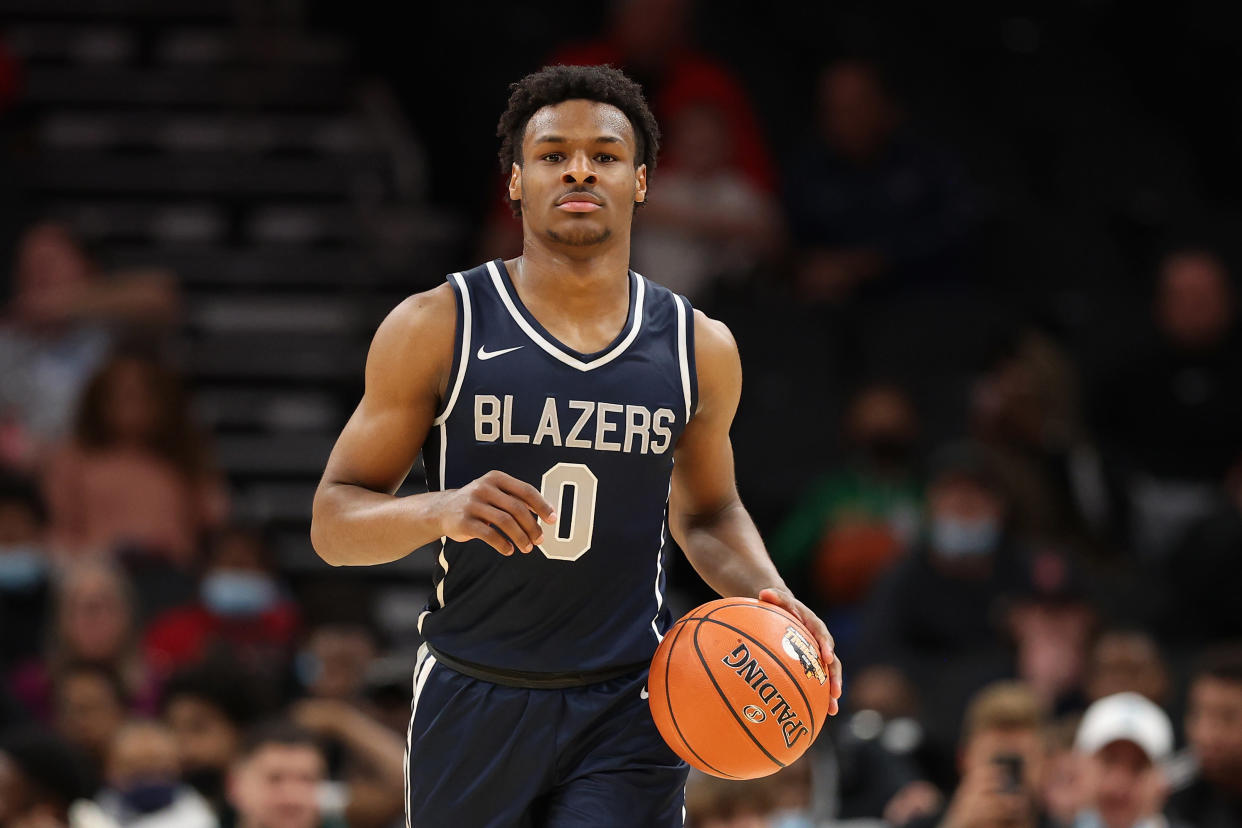 Bronny has already dealt with a knee injury that sidelined him for nearly his entire sophomore season, after needing surgery to repair a meniscus tear. He sat out during the fall of his junior year to work on strengthening that knee after a summer of AAU tournaments.

What has helped him is playing alongside some current NBA players in his short career.

As a freshman at Sierra Canyon High School outside of Los Angeles, Bronny played varsity with teammates Ziaire Williams and B.J. Boston. Williams was the 10th pick in the 2021 NBA draft and is seeing early rotational minutes with the Memphis Grizzlies. The Los Angeles Clippers drafted Boston in the second round, and he has been one of the biggest surprises of this rookie class.

Williams and Boston were part of the Sierra Canyon team when Bronny was a freshman. There were cameras everywhere with people asking for pictures and autographs from James’ oldest son.

“You’d be surprised by all the stuff Bronny has to go through,” Williams told Yahoo Sports after a game his senior year. “It’s not fair, but he doesn’t let it faze him at all. I’m learning how to be more like that from him, and he’s younger than me.”

Pressure. Bronny has had it his entire career. But what would be his path to play alongside his dad in the NBA?

Bronny James’ path to the NBA

Bronny is 17, so it’s probably too early to predict. However, he isn’t trending toward a one-and-done prospect with how his high school career has gone.

Last summer, he had a breakout game in front of NBA team scouts during Nike’s Peach Jam where he finished with 21 points, including six 3-pointers, with his dad coaching from the bench. The next game, in a head-to-head matchup with Emoni Bates, Bronny looked like a completely different player. He posted only eight points and went 1-for-5 from 3-point range.

This inconsistency has been the storyline of his high school career. He averaged 7.2 points, 2.6 rebounds and 2.5 assists per game while playing in Nike’s Elite Youth Basketball League with his grassroots team Strive For Greatness.

“Bronny has been a positive surprise,” an NBA team scout said after seeing him at Peach Jam. “He’s shown me he’s more than a last name, he can make shots and handle the ball. He’s very even-keeled for someone who’s under the microscope.”

His junior season has seen spurts of greatness followed by mediocre stat lines. In one of his biggest moments, Bronny rose to the occasion when Sierra Canyon beat his father’s alma mater, St. Vincent-St. Mary’s at then-Staples Center with his dad sitting courtside. Bronny led all players with 19 points and showed more confidence and maturity to his game than in the past.

“It felt special playing on the same court as he’s played,” Bronny told Yahoo Sports after the game. “I’m getting a lot of confidence from that, and it was a really special game for me. Afterwards, he just said he liked everything I was doing, with my poise and my pace for the game.” 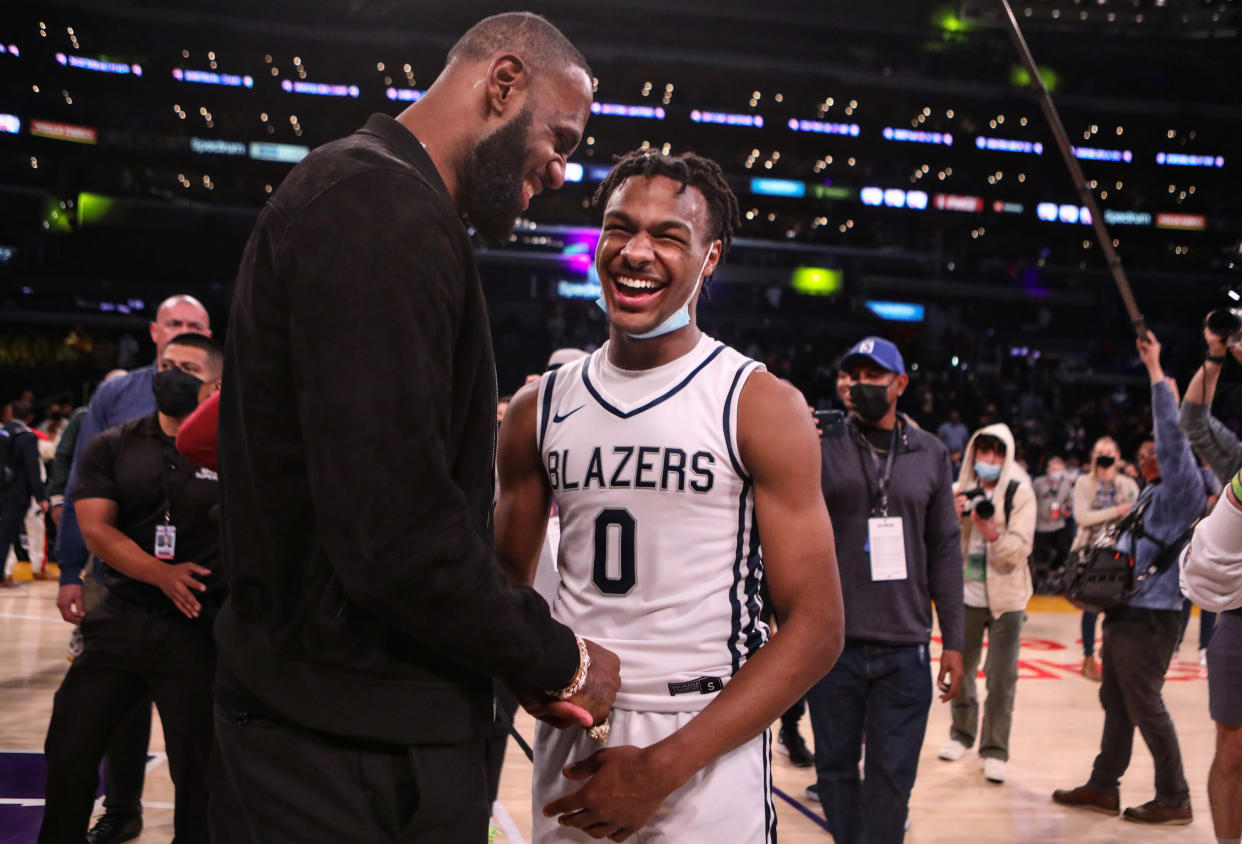 One week after the game, he was relatively quiet at the Hoophall West in Scottsdale, Arizona, where he scored 11 points and grabbed five rebounds. In his most recent game, Bronny finished with four points in a loss to Harvard-Westlake during the CIF Southern Section Open semifinal game.

Next year, Bronny will be a senior and Sierra Canyon will be his team. He’s been a great sidekick to five-star UCLA signee Amari Bailey this season, and it will be interesting to see how he handles the weight of leadership and taking over games. Bronny is a great on-ball defender, pushes the break in transition, is a bouncy guard who gets his hops from his dad and has solid shooting mechanics. He just needs to put it all together for a complete game.

According to 247Sports national recruiting director Eric Bossi, in the past five NBA drafts, 94.3% of one-and-done first-round picks were five-star prospects. There is a chance Bronny’s four-star rating could change in the next year, helping his case.

Little is known about Bronny’s recruitment, but Duke, Ohio State, UCLA, Michigan, Kansas, Tennessee and Texas have all shown interest. He might not be a one-and-done prospect on paper, but the luring of a package deal with his dad might be enough to get a team to draft him whether that’s after one year or four years at the college level.

Whatever the future holds for LeBron and Bronny, the father-son duo sharing the court at the highest level could be one of the most iconic moments in basketball and something all fans want to see happen. Only time will tell if Bronny lives up to his father’s bold prediction.