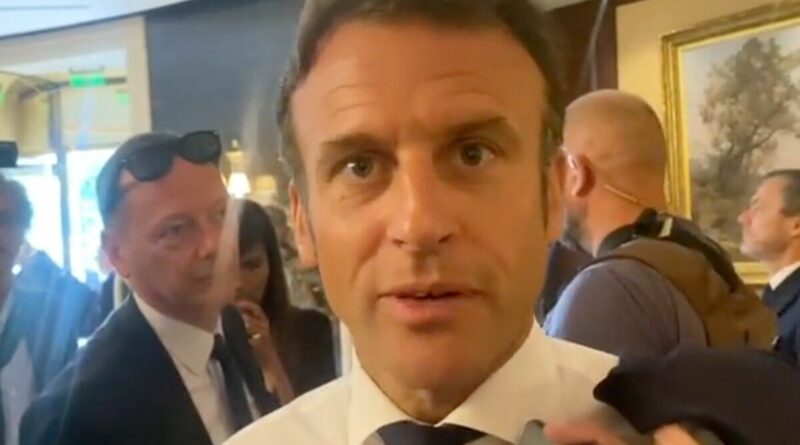 French President Emmanuel Macron was confronted by a British news crew over the feelings of Ukrainians who think he should have visited sooner. The French leader travelled to Kyiv with his Italian and German counterparts for the first time since the invasion of Ukraine in February. Mr Macron also denied the suggestion that France has misjudged Vladimir Putin’s invasion of Ukraine.

President Macron was asked on ITV News what he said to those Ukrainians who question why it “took so long” for France and the EU to come to the war-torn country.

“I am sorry but I am not sure they are saying exactly that,” replied the French leader.

“They are fighting hard and we have a lot of admiration and respect for them.

“I was here the beginning of February and I think it was very useful at that time to be here and to be in Moscow.”

JUST IN: Russia braces for new blow as Ukraine ‘within striking distance’

Asked whether France had “misjudged steps” over Russia’s invasion, he countered: “No no no I think all of us have to be very careful when we raise questions.

“Not to consider these are not our questions but the Ukrainian’s questions.”

It came as Mr Macron, German Chancellor Olaf Scholz, and Italian Prime Minister Mario Draghi started a joint visit to show support for Ukraine in its fight against the Russian invasion.

The three arrived in the Ukrainian capital early on Thursday after travelling together overnight in a train used to transport high-profile visitors to Ukraine.

“It’s an important moment. It’s a message of unity we’re sending to the Ukrainians, of support, to talk both about the present and the future, since the coming weeks, as we know, will be very difficult,” Mr Macron said as they arrived.

Mr Macron, who had been criticised at home and abroad for not travelling to Ukraine earlier, had repeatedly said he would only go if and when the visit could be “useful” and not be just a symbolic show of support.

It remained to be seen what concrete steps he would announce.

Romania’s President Klaus Iohannis will join the three for talks with Ukrainian President Volodymyr Zelensky expected to touch on Kyiv’s bid to join the European Union as well as the war itself.

The visit has taken weeks to organise with the three men looking to overcome criticism within Ukraine over their response to the war.

“We’re here, we’re focused, we will join President Zelenskiy to go to a war site where massacres have been carried out,” Mr Macron said.

Kyiv has accused France, Germany and, to a lesser extent, Italy, of foot-dragging in their support for Ukraine, saying they have been slow to deliver weapons and of putting their own prosperity ahead of Ukraine’s freedom and security.

A high-ranking official from an EU country said Zelenskiy was “in a really difficult position: the Ukrainian army not only needs weapons, but is also increasing lack of soldiers.”