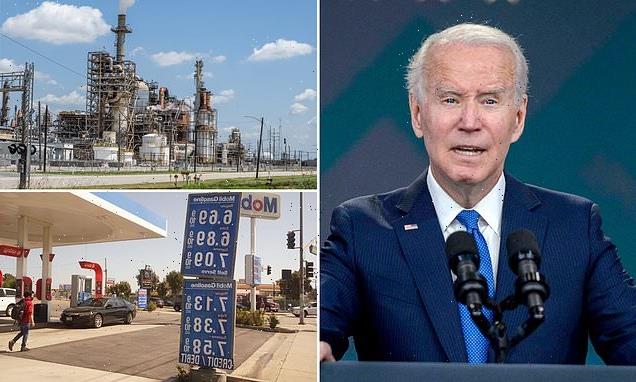 Joe Biden is planning to release up to 15million barrels of oil from the US’s emergency oil reserves as he tries to stem soaring gasoline prices.

The oil release would be the latest portion of a deal Biden struck last spring to release 180million barrels of oil from energy companies.

His administration is planning to announce the latest reserve release later this week, according to Bloomberg.

Biden said last week gasoline prices are too high and he would have more to say about lowering the costs this week.

News of the move to temper gasoline prices come just weeks before the pivotal midterm elections will put Biden’s approval to the test. 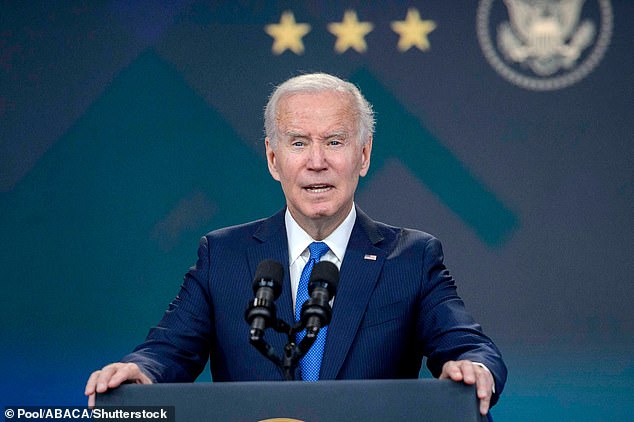 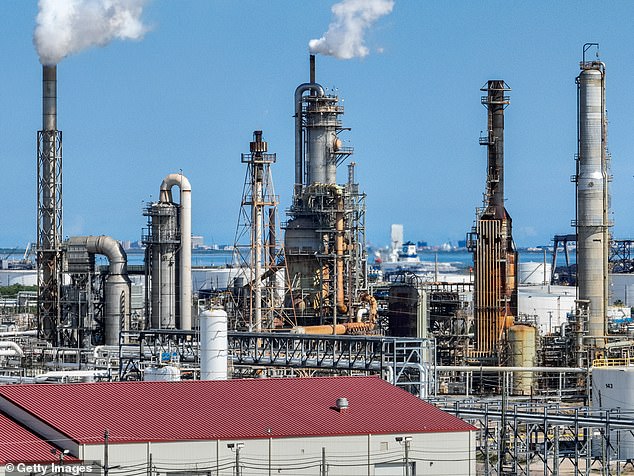 A source familiar with the White House deliberations said Biden was looking to ease gas prices before the midterms.

‘The administration has a small window ahead of midterms to try to lower fuel prices, or at least demonstrate that they are trying,’ the unnamed source said.

‘The White House did not like $4 a gallon gas and it has signaled that it will take action to prevent that again,’ they added.

Average US gasoline prices hit about $3.89 a gallon on Monday, up about 20 cents from a month ago and 56 cents higher than last year at this time, according to the AAA motor group.

Gasoline prices hit a record average above $5.00 in June. 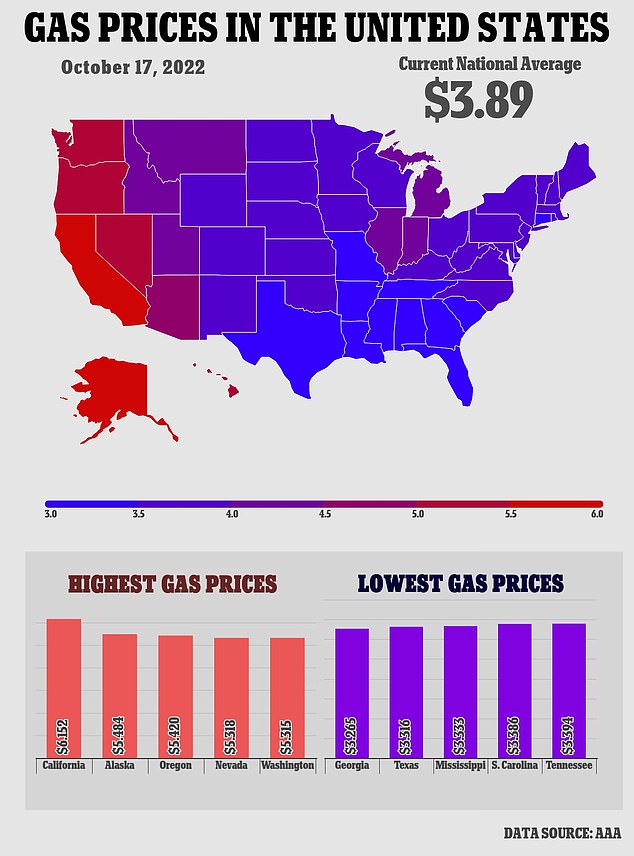 Last May, the Department of Energy said it would launch bids late this year for a buy-back of about one third of the 180 million barrel sale.

It suggested then that deliveries would be linked to lower oil prices and lower demand, likely after fiscal year 2023, which ends September 30 next year. Two sources said the buy-backs could continue through 2025.

Biden officials in recent months also urged oil refiners including Exxon Mobil Chevron and Valero to not increase exports of fuel and warned them it could take actions if plants do not build inventories.

The administration has not taken a potential ban of gasoline and diesel exports off the table although opponents of such a move say it could exacerbate Europe’s energy crisis and raise fuel prices at home.

In addition, the administration is mandated by a law Congress passed years ago to sell another 26 million barrels of SPR oil in fiscal year 2023, which started October 1. 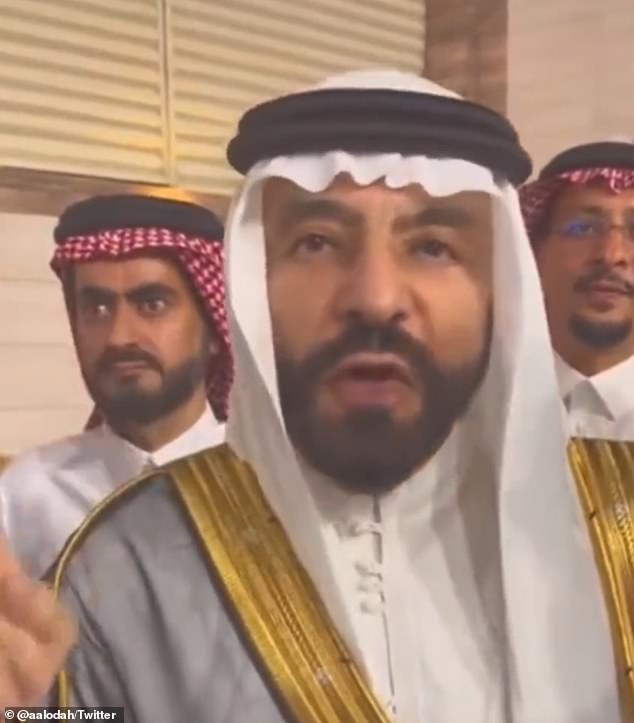 In a message aimed at ‘the West,’ Saud al-Shaalan is seen in a video saying ‘anybody who challenges the existence of this kingdom, we are all projects of jihad and martyrdom. Anybody that thinks they can threaten us–‘ 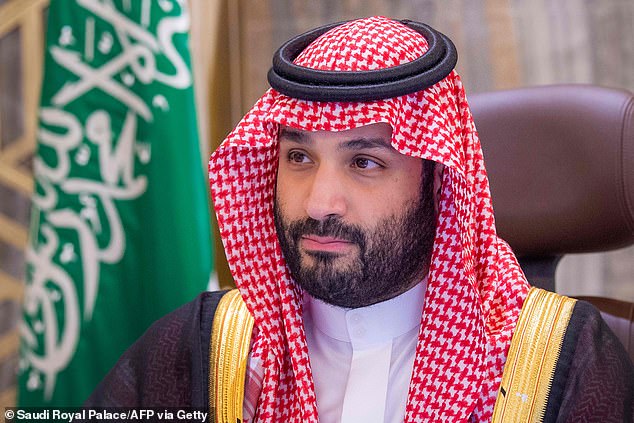 News of the president’s latest plans for oil come he announced said he would ‘reassess’ the US’s alliance with the oil-rich Saudis for their support to Russia, a move was sure to jack up gas prices just ahead of midterm elections.

Crown Prince Mohammed bin Salman’s cousin issued a violent threat against those who ‘challenge’ Saudi Arabia after Biden warned there would be ‘consequences’ for OPEC cutting oil production.

In a message aimed at ‘the West,’ Saud al-Shaalan is seen in a video saying ‘anybody who challenges the existence of this kingdom, we are all projects of jihad and martyrdom. Anybody that thinks they can threaten us.’

Al-Shaalan’s threat comes at a time of sky-high tensions between Washington and Riyadh after OPEC+ cut oil production by two million barrels per day and the Biden administration accused the Saudi Kingdom of aligning itself with Russia and Putin.

Biden claimed that Riyadh would face ‘consequences’ as aides announced the US would be reevaluating its relationship with the Saudis.

‘There’s going to be some consequences for what they’ve done with Russia,’ Biden said in a CNN interview aired last Tuesday.

‘I’m not going to get into what I’d consider and what I have in mind,’ he added. ‘But there will be – there will be consequences.’

The Kingdom then hit back with bombshell statement that the Biden administration had requested to delay the OPEC production cut until after the midterms.

The White House is now bracing for a further spike in gas prices before millions of Americans are set to cast their ballots.

‘The country that benefits the most from this 2 million barrel cut is Russia,’ White House national security spokesman John Kirby said in a call with reporters on Friday.

The cut ‘allows [Putin] to continue to fund his war making machine and it certainly gave him, Mr Putin, a sense of comfort here,’ Kirby continued.

The Saudi foreign minister said such an accusation is intended to ‘distort the facts’ and claimed Saudi Arabia has taken a ‘principled position’ with respect to the Russia-Ukraine war.

Biden himself had a controversial meeting with the crown prince, beginning with a fist bump rather than a handshake, in July to talk energy production.

‘The Government of the Kingdom of Saudi Arabia would first like to express its total rejection of these statements that are not based on facts, and which are based on portraying the OPEC+ decision out of its purely economic context,’ bin Farhan Al Saud said in a statement.

The foreign minister said that Saudi Arabia supports UN resolutions regarding the war and rejects ‘any infringement on the sovereignty of countries over their territories.’ 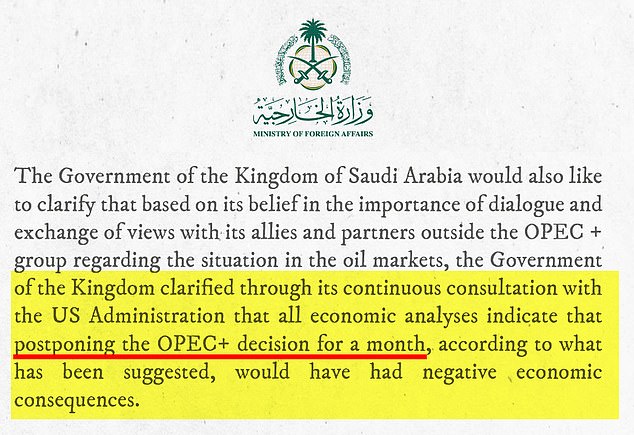 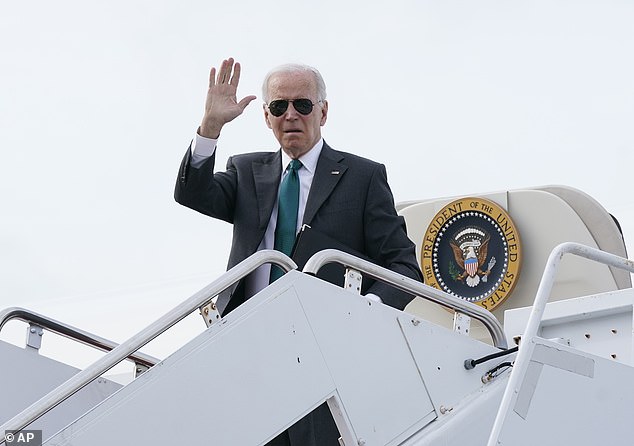 Biden, in turn, said he would ‘reassess’ the U.S.’s alliance with the Saudis

‘The Government of the Kingdom clarified through its continuous consultation with the U.S. Administration that all economic analyses indicate that postponing the OPEC+ decision for a month, according to what has been suggested, would have had negative economic consequences,’ bin Farhan Al Saud said.

But Kirby said Washington presented Riyadh with analysis showing there was ‘no market basis’ for production cuts and ‘they could easily wait till the next OPEC meeting and see how things developed.’

‘Other OPEC nations communicated to us privately that they felt coerced to support Saudi’s direction.’

In a press call Kirby said Saudi Arabia had been ‘twisting arms’ to get other nations to agree to the cut, and ‘more than one’ had privately expressed concerns about doing so.

Oil prices climbed on Tuesday, bolstered by a weaker U.S. dollar and supply woes, although gains were capped by the spectre of lower fuel demand from China as it persists with its stringent zero-COVID policy.

The U.S. dollar index – which measures the greenback against six major peers including sterling – sagged near a one and a half week low as Britain’s dramatic U-turn over a controversial tax-slashing ‘mini-budget’ lifted risk appetite. A weaker dollar makes oil cheaper for non-U.S. buyers.

Following the steep production cut agreed on by OPEC+ – the Organization of the Production Exporting Countries (OPEC) and its allies, including Russia – earlier this month, investors have been seen increasing their long positions in futures, ANZ Research analysts said in a note.

OPEC+ member states have been lining up to endorse the cut to the output target after the White House accused Riyadh of coercing some other nations into supporting the move.

Meanwhile, expectations that China will keep with loose monetary policy to help its economy, hobbled by COVID-19 restrictions, lent some support to oil prices. The country’s central bank rolled over maturing medium-term policy loans on Monday while keeping its key interest rate unchanged for a second month.

However, China’s fuel demand outlook weighed on sentiment after the world’s top crude oil importer delayed the release of its economic indicators, originally scheduled to be out on Tuesday, CMC Markets analyst Tina Teng said. No date for a rescheduled release has been given.

China’s adherence to its zero-COVID policy has continued to increase the uncertainties about the country’s economic growth, Teng added.

On the supply side, U.S. crude oil stocks were expected to have risen for a second consecutive week and are estimated to have increased by 1.6 million barrels in the week to Oct. 14, a preliminary Reuters poll showed on Monday.

Output in the Permian Basin of Texas and New Mexico, the biggest U.S. shale oil basin, is forecast to rise by about 50,000 barrels per day (bpd) to a record 5.453 million bpd this month, the Energy Information Administration said.