For a full week, a big black banner was posted from a sidewalk in Berkeley, California. “OCCUPY WHOLE FOODS”, it declared in large, white block letters.

But the protesters who created it, a group from the animal rights activist organization Direct Action Everywhere (DxE), were not actually able to do much occupying. Just days before a weeklong protest scheduled for late September, in which the activists had planned to call attention to alleged animal welfare violations by suppliers to Whole Foods’ parent company, Amazon, the Berkeley store filed a restraining order.

“We are not allowed to even step foot in the parking lot right now,” said Cassie King, a DxE organizer. “We can’t go inside the store and ask our questions.”

Early that week, the group sang, chanted and beat drums to attract customer attention from sidewalk. But on this quiet Friday afternoon, with the weeklong demonstration nearly over, a few members sat behind tables, megaphones facing down, waiting for interested passersby to approach them. King said they’d had some luck getting customers curious about their signs to walk over. But, when asked, a few different groups of people eating lunch outside the store didn’t seem to notice – or care – about what was happening beyond their parked cars. Without access to the inside of the store, it was harder for the demonstrators to get attention.

The restraining order marks the climax of a tense standoff between the vegan activist group, which advocates for “total animal liberation”, and the organic food giant. For the past several years, DxE has staged demonstrations at this Berkeley Whole Foods, calling for greater transparency in both Whole Foods and Amazon’s supply chain.

Whole Foods’ website describes rigorous welfare standards for all of its animal products, and the company has implemented a rating system to inform customers’ purchasing decisions. According to Dena Jones, the director of the farm animal program for the Animal Welfare Institute, an animal rights organization that takes on factory farms around the world, the “organic” label regulated by the USDA does not necessarily guarantee high-levels of animal welfare, but Whole Foods bases their standards on a more rigorous evaluation.

“All suppliers of fresh meat, poultry and eggs to Whole Foods must be certified by Global Animal Partnership (GAP), which is a farm animal welfare rating program,” she wrote in an email. “On-farm inspections are conducted every 15 months to determine whether the farm is in compliance with GAP standards. Unlike the organic program, GAP standards are comprehensive and cover nearly all aspects of animal care.”

But the DxE co-founder, Wayne Hsiung, claims his organization is being silenced for exposing violations of the company’s standards. The group insists that Whole Foods sells animal products from suppliers who keep chickens in crowded sheds, without access to outdoors, even when they are labeled free-range. This, they say, leads to feces-covered birds who don’t have access to enough food, water and sunshine. “These companies aren’t even willing to have conversations about these issues,” he adds. Previous reporting has, however, called into question whether footage of animal mistreatment released by the group is misleading.

DxE’s in-store actions range from chanting and singing about animal rights to more extreme tactics: splattering eggs with fake blood, acting out scenes of animal slaughter (with members representing the animals) and displaying graphic photos and videos in meat and dairy aisles. 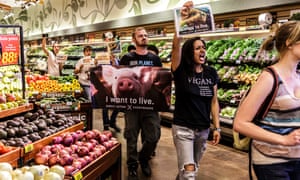 “DxE members have repeatedly entered our stores and property to conduct demonstrations that disrupt customers and team members by blocking access to our aisles, departments and cash registers, interfering with our business and putting the safety of both customers and team members at risk,” a Whole Foods representative said in a statement. The spokesperson did not address DxE’s allegations about the company’s suppliers.

According to Whole Foods’ complaint, filed with the Alameda county superior court, these protests prevent their customers from purchasing items and are dangerous to shoppers, employees and the activists themselves. The company attempted to block DxE from accessing any Whole Foods location across the state and on 26 October a judge will decide whether to grant that request, but for now, activists are only barred in Berkeley.

It’s not the first time the group’s approach in the liberal city has drawn attention. In 2017 it faced criticism for forcing a family-owned Berkeley butcher to hang an animal rights sign in its window; in exchange, the group agreed to cease gruesome demonstrations outside. DxE had declared it wanted to make Berkeley the first city to ban the sale of meat; the butchers called it “ethical extortion”.

The aim with its latest Whole Foods protest, Hsiung says, was to garner interest and support for so-called “right to know” legislation, supported by local politicians in Berkeley and San Francisco, that would better inform customers about where their meat comes from and how animals raised for food are treated.

The push culminated in a raid on a poultry farm in Sonoma county, an agricultural region 50 miles north of Berkeley. The group claims McCoy Poultry Services, a supplier of organic chickens to Perdue Foods – which in turn supplies to Whole Foods’ parent company Amazon – keeps its chickens in dark, cramped conditions.

On Saturday 29 September, DxE left its post on the sidewalk across from the Berkeley store and roughly 150 protesters descended on McCoy. A livestream showed demonstrators quietly holding flowers in the air as others set up a temporary veterinary clinic to care for injured chickens. After four hours and an altercation with the farm’s owners, 67 protesters were arrested by the local sheriff’s department. The chickens they hoped to liberate and care for, along with dead ones they discovered at the farm, were turned over to animal services. The live chickens were found to be too sick to revive and were ultimately euthanized. 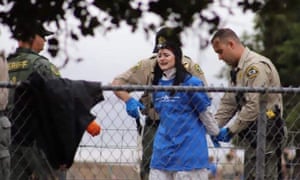 A representative from Perdue said chickens from McCoy were not sold at Whole Foods and pushed back against the allegations of mistreatment, accusing the protestors of traumatizing the chickens.

“The welfare of the birds that are being raised for our company is paramount,” the Perdue Farms senior vice-president, Andrea Staub, wrote in a statement, adding that the farm was certified by GAP. “With any flock of chickens there is always some small amount of mortality. Our investigation on the farm so far has shown that the chickens were being cared for properly with plenty of food and water.”

All the protesters have now been released from police custody, but the Sonoma county district attorney may still file criminal charges.

“We have been kicked out, we have had the police called on us, we have been ignored, and now there is [the Whole Foods] lawsuit,” said King, who was among those arrested on Saturday. “But Whole Foods just continues to escalate this rather than give us the answers to really simple questions.”