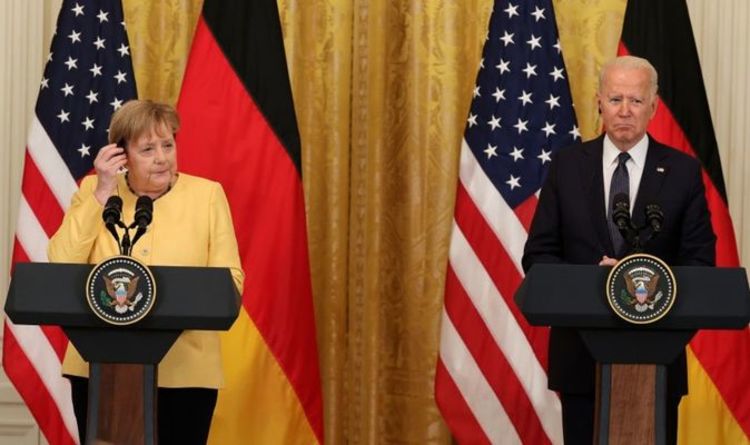 During his time in office, Donald Trump turned his back on the EU, with his mantra of “America First.” Many within the EU rejoiced when Joe Biden became President, hoping for improved transatlantic relations – but it seems Mr Biden isn’t prepared to make concessions to improve EU-US relations.

The row began with former US president Donald Trump, who imposed several controversial protectionist policies during his time in office.

These may have gained support from within the US but they seriously harmed EU-US relations.

Policies such as the introduction of large tariffs on imported European steel were slammed by many within the EU.

Former EU trade chief Cecilia Malmström said such tariffs were being “used as a weapon to threaten and intimidate us”.

And vowed that the EU “will stand up to the bullies [the US].”

Many EU leaders saw Joe Biden’s election as president as a golden opportunity to improve EU-US relations, which had been seriously damaged under Mr Trump.

But it seems Mr Biden isn’t willing to compromise on matters of security and won’t relax the steel tariffs the EU is demanding the US remove.

The President would face a huge backlash from the US steel industry and unions to make this a realistic option.

Especially as the midterm elections are just around the corner – removing the tariffs would be too damaging for the President.

It seems Mr Biden is too concerned about his popularity within the US to make concessions to improve EU relations.

Why will the EU have to compromise on matters of security?

When Mr Biden was first elected, many EU leaders hoped he would focus renew the US’ commitment to NATO.

But it seems Mr Biden has snubbed the EU in favour of a security policy focused on Asia and US interests.

Mr Biden finished his first high-level UN General Assembly week, by assembling the leaders of “the Quad”, Australia, India, Japan and the US at the White House, crucially excluding any EU nations.

Here he made it clear that rather than leading a rejuvenated Western alliance he plans to create smaller, regional alliances focused on US interests.

The Quad leaders after the meeting made the following statement: “The occasion of the Quad summit is an opportunity to refocus ourselves and the world on the Indo-Pacific and our vision for what we hope to achieve.”

It seems that if the EU wants to improve its relations with the US they will be forced to give up calls for the removal of steel tariffs and for the US to re-commit to NATO.

As Mr Biden has made it clear he won’t be moved on either issue.