Home » World News » Why the Germans helped get Brexit done

Why we ‘ghastly Germans’ gave the British a helping hand to get Brexit done, writes Bild columnist ALEXANDER VON SCHOENBURG

Give it a few years and I predict that Britons will look back on this unholy Brexit affair and credit two unlikely factors with saving the day: The pandemic… and the ghastly Germans.

While the EU’s chief negotiator Michel Barnier and his compatriot, the French president Emmanuel Macron, were all for giving you Brits a punishment beating ‘pour encourager les autres’ – that is any other would-be secessionists among the remaining 27 members of the EU – Berlin was always more inclined to part friends.

A ‘conscious uncoupling’ of the Gwyneth Paltrow variety, if you will.

Monsieur Barnier was even prepared to goad Britain into walking away from the talks by making only the tiniest of concessions, convinced that you’d be back at the negotiating table in a few months’ time, on your knees and begging for a deal. 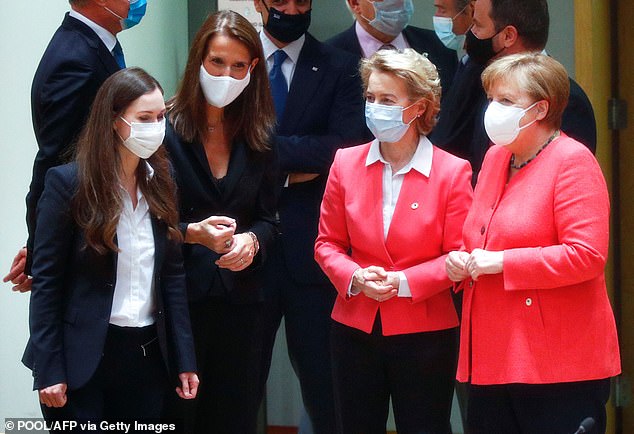 German Chancellor Angela Merkel, pictured right with Ursula von der Leyen, and the Finnish and Belgian Prime Ministers Sanna Marin and Sophie Wilmes at a meeting in Brussels in July

(And serving as a potent deterrent to any prospects of a Czech-out, an Italeave or a Polexit – none of which is going to happen any time soon in any case, if you ask me.)

In the corridors of power in Berlin, however, especially in the Bundeskanzleramt – Angela Merkel’s chancellery – and in the foreign ministry, the view was that to isolate Britain in its hour of need – when the situation due to Covid is so dire – would be very unwise.

This was not down to a sudden outbreak of sentimentality in a world where realpolitik rules the roost. The calculation was that it is not in Germany’s best interest to blow apart a ‘machine’ that was already stuttering dangerously.

After all, Germany relies on this machine to continue functioning at the level it does and the UK is our fourth largest export market and our car manufacturers’ biggest foreign market.

Between them, Volkswagen, Mercedes-Benz and BMW sell hundreds of thousands of gas-guzzlers to the Brits every year.

A failure to reach a deal, ran the thinking in Berlin, could have had massive repercussions and might even have escalated into an economic crisis for Europe on a global scale.

That, in a nutshell, is why anti-secessionist Michel Barnier was effectively sidelined at the 11th hour of the talks.

It was Prime Minister Boris Johnson and EU president (and a former German minister) Ursula von der Leyen who took it upon themselves to break the logjam. 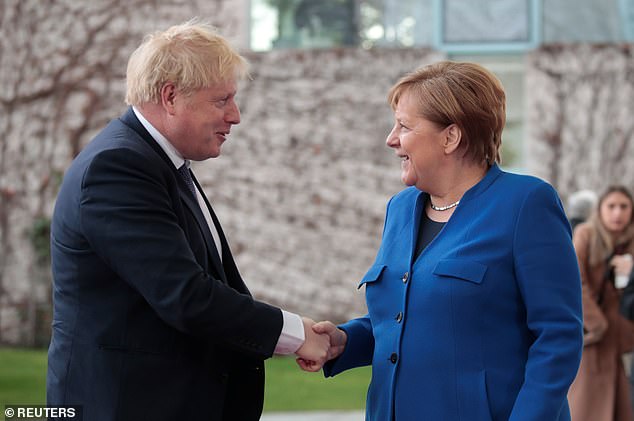 And from what I hear, Frau von der Leyen also had one or two chats with Frau Merkel, her former mentor, as well.

It was Tuesday’s late-night phone call between Johnson and von der Leyen that was the game changer.

For it was then that both sides came to an agreement on the last two outstanding contentious areas (fishing quotas and state subsidies). They both realised that not pressuring their clerks to work out the last tiny details would be simply absurd.

Some of those Eurosceptic politicians, pundits and campaign leaders who fought most strenuously for a Leave vote in the referendum of June 2016 will lament this outcome. They will call it a Brexit in name only. They are wrong.

A Norwegian-style deal would have turned Britain into a satellite state of the EU with no say in any regulatory matters. A departure on World Trade Organisation terms would have forced up prices in some sectors and created shortages in others.

What Mr Johnson has achieved is a tailor-made agreement that allows full access to your most important market while being able to write your own laws and standards – as long as you play fair, which is something British traders have been renowned for doing for centuries.

There will be a mechanism for settling disputes independent of the European Court of Justice but my guess is that this will hardly ever have to come into play.

Your Prime Minister has achieved a deal which is nothing short of sensational: Legally out of the EU but with full economic access to it – which is the best possible news for the members of the EU, too.

When Boris Johnson was attacked for aspiring to stay in the single market but ending freedom of movement, he famously responded by saying: ‘My policy on cake is pro having it and pro eating it.’

Well, all I can say is, I wouldn’t be surprised if – when news of the deal broke on Thursday – No 10’s Comeback Kid helped himself to a large slab of Victoria sponge.