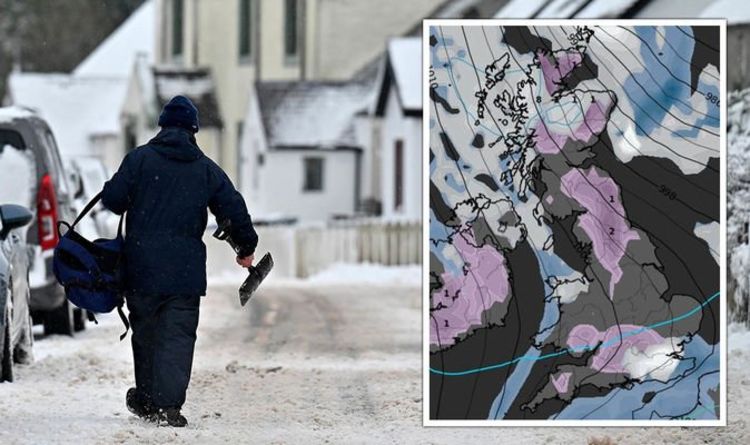 Only a few locations across the country saw an official white Christmas last year, which the Met Office declares when staff at one of its observing stations spot a single snowflake on December 25. Snowflakes descended across Scotland and parts of Yorkshire, snubbing the rest of the country, which saw primarily mild conditions. They won’t have to feel left out for long, however, as, according to weather charts, the next few days will see a white carpet cast from north to south.

Will it snow in January?

The latest weather charts show that winter in Britain will finally kick in this January.

The month, traditionally one of the coldest of the year, will see temperatures descend to bitter lows across much of the country, starting on Tuesday January 4.

And they will continue to do so until the middle of the month, bringing a broad patch of snow from Scotland to Brighton.

Maps from forecaster WXCharts, show temperatures in the north plummeted into the minus range on Tuesday morning.

Yorkshire and parts of Scotland reported between -1C and -4C, with warming expected throughout the day.

WXCharts expected highs will reach the low single figures, around 4C and 5C.

Between Wednesday and Thursday, the cold will become more pronounced, descending to -10C around Scotland.

Further south, temperatures will reach 0C, and snow will follow the same track, starting in a broad patch from Scotland to Manchester early in the morning, with totals of 1cm to 2cm.

By 12pm, the system commanding today’s cold spell will have reached the capital city and beyond.

WXCharts expected the snow will reach the furthest south at Brighton.

Colder temperatures will keep a shallow blanket in place until Friday January 7.

By then, another system will sweep in to top up the recent snowfall.

Rain should melt the vast majority of the deposited snow by the Sunday following.

The Met Office has issued snow, ice and wind warnings from Tuesday to Friday as it anticipates a hazardous few days to come.

The first warnings commence from January 4 and stretch across Scotland and northeast England, where wind, snow and ice could cause a nuisance.

These warn of potential injuries from ice in the north until 11am today and traffic disruption from snow until 9am on January 5.

Another warning – in place for January 7 between 12am and 10am – forecasted hazards caused by snow and ice across the east coast of Scotland and northern England and all of Northern Ireland.

Wintry showers could build a “fresh covering of snow” for elevations over 200m, approximately 2cm to 5cm widely and up to 10cm.