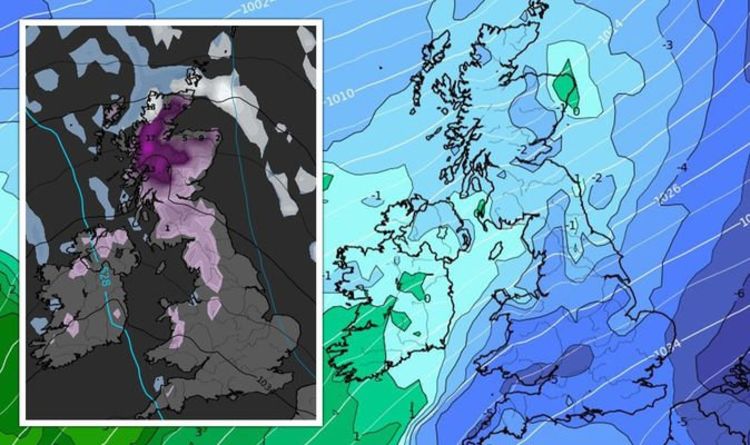 The first few months of a new year traditionally come with a covering of fresh snow, as temperatures commonly drop in January and February. So far, however, most parts of the country have dealt with the fallout of extreme wind and rain, with gales piggybacking on milder climates over the weekend. Forecasts show that could soon change for some areas, with charts showing an incoming cold front.

Will it snow this week?

Some people will have awoken this morning to a bitter chill as the temperature noticeably drops across the UK.

From 6am, a chilly area descended across the UK, freezing the country below zero, with temperatures ranging between 0C and -7C.

Only Scotland saw snow today, with depths between 10cm and 25cm in the northwest.

Although most areas have since warmed up, they have only settled in the single figures, primarily below 10C.

Between Wednesday and Friday, the sub-zero temperatures will return more widely, as a wintry plume licks at the UK.

That plume will bring a scattering of snow, according to WXCharts, extending Scotland’s coverage further south.

Britons living in southern areas will, according to the forecasters, see a lighter layer by the weekend.

WXCharts shows that snow showers will hammer down on Scotland until Thursday when they stretch towards the Midlands.

People living in northern Wales, Yorkshire and Manchester should see a scattering by 3pm on February 10.

By Friday, February 11, the snow will have settled following the “wintry showers”, according to the Met Office long-range forecast.

While still deep in Scotland, areas south of Edinburgh should only settle between 1cm and 5cm.

Elsewhere on the day, people will enjoy dry weather with “plenty of sunshine”.

The Met Office forecast shows that a band of rain will melt most of the snow over the weekend.

And it will usher in another bluster couple of days for most people between February 12 and 13.

The forecast states the weather will prove windy in the north, with heavy rain to the northwest, while temperatures remain “average” for the month around 5C to 10C.

The Met Office wrote: “Heavy rain may return to the northwest and windy for most, with gales possible in the west and northwest at the weekend.

“Through the rest of this period, high pressure will likely dominate across most of the UK.

“Rainfall will be limited at first with a risk of some wintry showers in the north and east, with an increasing chance of rain in western and northwestern areas later.

“Temperatures likely to be near average with the potential for a brief colder interlude for northern and eastern parts.”