More than 600 people gathered in Bourg-Saint-Maurice, in the Savoie region of south-eastern France, yesterday against the government’s announcement last week to keep ski lifts closed over the festive period to help stop the spread of coronavirus. Ski resorts in the French regions of Isère and Savoie are said to be affected by the new policy but they have said they have put measures in place to keep the resorts save from the deadly virus. Guillaume Desrues, mayor of Bourg-Saint-Maurice said he was worried about the economic effect of having the lifts closed.

He said: “Our economic activity depends largely on tourism and there we feel it an injustice to have been the only ones put aside for the recovery in mid-December.”

Crowds in Bourg-Saint-Maurice were pictured carrying broken red hearts to share their heartbreak over “the feeling of not being listened to”, according to Jean-Luc Boch, mayor of La Plagne and President of the Association of Mayors of Mountain Stations (ANMSM).

Yannick Amet, mayor of Sainte-Foy-Tarentaise told the crowds yesterday: “We have been working for three months in consultation with the medical profession, ski area operators and professionals from all sides, in order to coordinate our actions and set up screening centres in each of the communes using PCR and antigen tests. 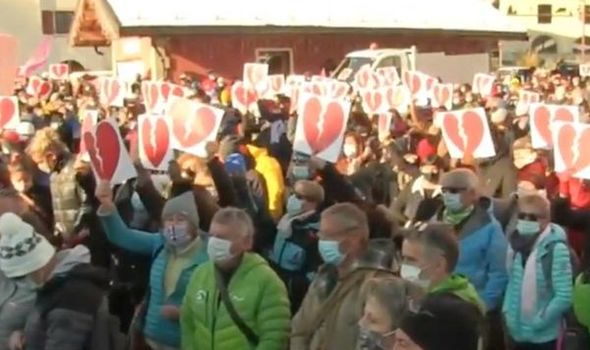 “The department of Savoie and the region are able to provide these tests on a massive scale.

“A reception centre in Bourg-Saint-Maurice is ready and can accommodate around forty people in safety.”

People also took to social media to praise those who were “standing up” against the new rules.

One person tweeted: “Well done to them! We must stand up and not be silent in the face of the leaders of the authoritarian country that France has become!

“Reopen everything, right away!”

Another person added: “Macron considers that it is Merkel who manages our borders like our ski resorts.

“We cannot act without sovereignty.”

Prime minister Jean Castex is scheduled to meet representatives of the French mountain communities on December 11.

They are reportedly planning to “discuss the situation and decide when resorts can reopen”.

The decision comes as the French government has also proposed “random border checks” to be put in place over Christmas that will try to prevent people from trying to get to foreign resorts.

These measures could include virus tests and a seven-day quarantine on skiers returning to France.

Austria announced today that individual outdoor sports will be allowed this Christmas, including skiing, although it will limit the capacity of ski lifts.

The resort of Bansko, in Bulgaria, is also planning to open.

Spain plans to open its ski resorts, but conditions will be in place over different regions, according to Health Minister Salvador Illa.

And some skiing areas have already opened in Switzerland, which is not part of the European Union.