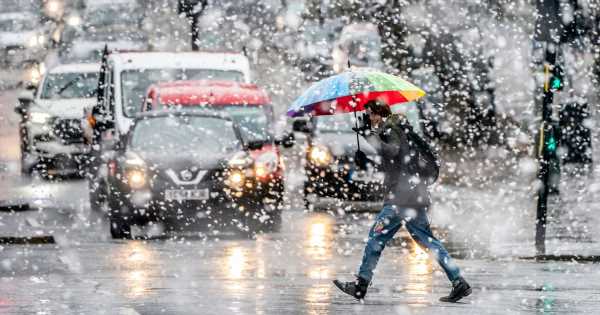 Forecasters are predicting a Winter Wonderland in the UK today (December 16) with up to four inches of snow falling in just two hours.

The Met Office has stated that temperatures as low as -11C can be expected in Scotland and -8C in the south of England.

Overnight the mercury is then forecast to drop as low as -12C in many regions.

The blizzards, combined with heavy rain and gales, could lead to electricity being cut off in homes, rural communities becoming isolated from surrounding areas and vehicles stranded on snow-covered roads.

Drivers will also face difficulties from this morning as a warning for snow and ice comes in force across central and southern Scotland and the northeast of England.

The Met Office said: "Outbreaks of sleet and snow will spread across much of southern, central and western Scotland through Friday with 1-3 cm of snow likely in places below 200 metres, with 5-8 cm possible above 200 metres south of the Central Belt.

"Over high ground north of the Central Belt, there is potential for 10-20cm to accumulate above 200 metres through Friday.

"Later in the day, snow at low levels will likely turn to rain. In addition to the snow, sleet or rain may fall onto frozen surfaces leading to some icy conditions."

Over the weekend, however, milder temperatures are on their way with double figures possible in certain southern areas.

A high of 13C is even being suggested for London at the start of next week, compared to the 1C people in the capital endured on Wednesday (December 14).

That would offer some welcome respite with the last week representing the longest period of cold weather seen in the UK since February 2021.

But the warmer conditions are unlikely to last long with another blast of cold air from the Arctic potentially dumping more snow on Britain later in the week.