In Donald Trump's presidency, this may prove to be the sweetest, most consequential, victory of all.

On Saturday in Washington, Trump will accomplish what has been a dream of Republican presidents for half a century: a reliable conservative majority on the Supreme Court.

And it is a victory achieved in the most Trumpian way possible: a salacious, suspense-filled drama that has poured rocket fuel on already blazing divisions between progressives and conservatives, men and women, the old and the young.

Not that Trump will mind – division, after all, is his trademark and infuriating progressives his favourite pastime.

It was already obvious to anyone with a pulse that America is a deeply polarised country. But the Kavanaugh confirmation saga has taken the existing divisions to a darker, more disturbing place. 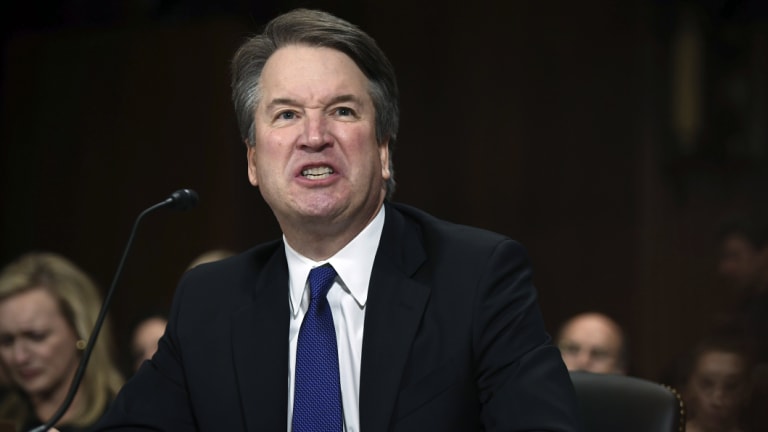 America has been exposed as a country where civil disagreement has become all but impossible, and the political system has seemingly lost its ability to work through complex problems in a fair-minded, rational way.

Partisans on both the left and right have come to remarkably certain conclusions about a teenage party that happened almost 36 years ago.

Democrats are convinced Kavanaugh is a sexual abuser, despite a lack of corroborating evidence; Republicans believe his accuser, Christine Blasey Ford, is part of a left-wing plot to bring their man down. Few have admitted to doubt, and even fewer have strayed from their partisan leanings when deciding who is right and wrong.

The reason is that the stakes are so high. Australia's High Court wields huge influence – as seen in the Mabo decision recognising native title, or the strict interpretation of a ban on dual nationals sitting in Parliament.

But it pales in comparison to the US Supreme Court, which occupies a far more powerful and politically-charged role in national life.

It was also the Supreme Court that tore up restrictions on political campaign spending by businesses and unions, and ruled that the second amendment protects an individual's right to possess a firearm.

Despite this phenomenal power, Republican presidents have repeatedly botched their attempts to lock in a conservative Supreme Court majority.

The most egregious example was George H.W. Bush's appointment David Souter, who became one of the most reliably liberal justices on the court.

And it was Ronald Reagan nominee Anthony Kennedy who provided the key vote to uphold Roe v Wade and legalise same-sex marriage.

Conservatives are hoping, and expecting, that Kavanaugh will be a far more reliable vote for their cause.

If the Supreme Court were to overturn Roe v Wade, abortion would likely become illegal in 22 states – that is, almost half the country.

That would, of course, be a highly contentious step. To protect the court's legitimacy, Chief Justice John Roberts may prefer to water down protections for abortion access than overturn settled law.

Conservatives will also be more hopeful of winning cases that weaken environmental regulations, allow politicians to design their own electoral districts and restrict the federal government's involvement in healthcare.

With Trump in the White House and conservatives dominating the Supreme Court, progressive America's nightmare has finally arrived.