A woman who allegedly drove her car into two police officers at a Seaford fast-food restaurant and was later arrested while hiding in a backyard has been charged with reckless conduct endangering life.

Police were called to a restaurant on Ballarto Road in Seaford around 2.40pm on Tuesday to perform a welfare check on a woman who was thought to be unwell. 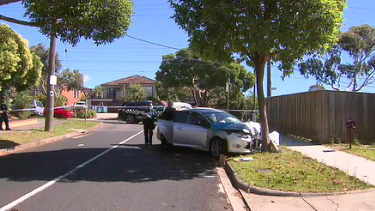 Police at the scene of the crash in Burwood on Tuesday.Credit:Nine News

Police allege that when they arrived at the venue, the 27-year-old Fairfield woman drove her vehicle into the officers, pinning a policeman against a wall and then running over the leg of a policewoman.

The woman then allegedly fled the scene in a silver Ford sedan.

The two officers were taken to hospital in a stable condition.

The police air wing followed the woman as she drove across the city for almost an hour, at times allegedly reaching speeds of 170km/h.

Police say ground-based officers used a deflation device and the woman's car collided with a tree in Burwood – about 40 kilometres away from Seaford – about 3.35pm.

Detective Inspector Martin Bourke said on Tuesday the woman then ran from police and tried to hide in the back yard of a house in nearby Gillard Street before she was arrested.

The woman has been charged with four counts of intentionally exposing an emergency worker to risk by driving, intentionally causing serious injury, reckless conduct endangering life and assault-related offences.

She was remanded in custody and is due to appear at Melbourne Magistrates court on Wednesday.

In Victoria, an assault on an emergency service worker attracts a mandatory minimum sentence of six months in prison.

Catch all the day’s headlines

At the end of each day, we’ll send you the most important breaking news headlines, evening entertainment ideas and a long read to enjoy.  Sign up here.