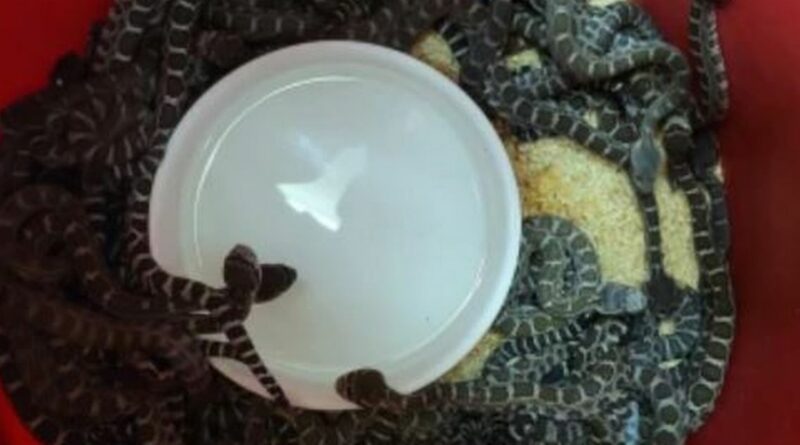 A woman living in California had a bigger snake problem than she thought after rescuers pulled out almost 90 rattlesnakes from her home.

The snakes were reportedly tangled underneath the property and needed assistance in being freed.

What was originally thought to be just a couple, turned into 59 babies and 22 adult snakes living under the house.

Sonoma County Reptile Rescue was called and spent almost four hours removing the snakes and there still could be more.

The rescue posted on Facebook: "I got a call from somebody that said they had snakes under their house, 3 hours and 45 minutes later This is what I came out with, what would you do."

They later added: "59 babies and 22 adults is the final count and yes I will be going back and checking several more times before the 15th of this month."

According to HuffPost, rescue director Alan Wolf returned to the property a week later to find seven more snakes.

Wolf told them snakes often come and go, which is why he returned to check for any remaining stragglers.

The snakes were identified as Pacific rattlesnakes, who are known to give birth to four to 21 babies from August to October, according to the Burke Museum in Seattle.

It is said that Female Pacific rattlesnakes gather in one den to give birth, which in this case is suspected to be under the woman's property.

The rescue's post on Facebook about the situation prompted a number of comments calling it a "snakemare" and some asking why they had to be removed.

One user wrote: "If they generally don't bother humans, then, is it really necessary to remove them?

"I used to walk 160 acres of land every day when I was a child and my dad wouldn't get me boots. So, I was just wearing tennis shoes. I never had a problem with snakes."

Another said: "That house would be on the market immediately and I would move out immediately!! Just the thought of it creeps me out."