A woman who posed as a volunteer firefighter has falsely claimed almost $200,000 in relief payments after the Black Summer bushfires, police allege.

The Lithgow woman, 49, was charged on Friday after allegedly making 522 false claims for payment over six months under a compensation scheme established by the federal government during the summer bushfire crisis. 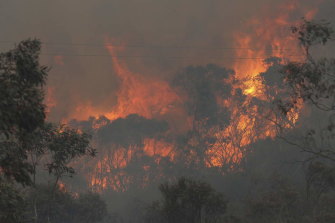 An out of control bushfire threatens four homes near Newnes train station, near LithgowCredit:Wolter Peeters

The scheme, introduced at the height of the crisis in late December, offered volunteer firefighters payments worth up to $300 a day, capped at $6000, if they had served for more than 10 days fighting the summer fires.

Police will allege that the woman was paid for 34 of the 522 allegedly false claims she made between January and June this year, reaping more than $190,000.

Detectives began inquiries after noting the multiple submissions made from January 17 until June 20.

Police executed a search warrant at the woman's Lithgow house on Wednesday morning and arrested her at the scene.

She was taken to Lithgow Police Station and charged with 34 counts of dishonestly obtaining financial advantage by deception, as well as four attempts.

Items including clothing, electrical items and identification were seized at her property.

"The woman is not – and never has been – a volunteer firefighter," a police statement said.

She has been granted strict conditional bail and will appear in court on January 28.

Catch all the day’s breaking news

At the end of each day, we’ll send you the most important breaking news headlines, evening entertainment ideas and a long read to enjoy.  Sign up here.