Singapore: Foreign Minister Penny Wong has warned Pacific leaders a region-wide security and trade deal with Beijing could sacrifice their independence, lead to unsustainable debt levels and endanger the region.

Wong spoke in Suva after new Prime Minister Anthony Albanese blamed the former Coalition government for China’s rising influence in the Pacific, arguing Australia had “dropped the ball” by neglecting its closest neighbours.

Albanese said the security deal between Beijing and Solomon Islands signed last month was “just the first of a range of deals that they want to exercise” and that Australia had to increase respect as well as funding for the Pacific.

In her first press conference as foreign minister, at the Pacific Islands Forum on Thursday evening, Wong set off a fight over the future of the region as Canberra and Beijing vie for influence and allies through promises of economic development, security assistance and climate change action.

“Our objective is your independence and your own economic sustainability and prosperity,” she said. “It doesn’t come with strings attached. What we would urge as Australia is consideration of where a nation might wish to be in three or five or 10 years.”

Wong said Australia would help secure the region, appoint a new ambassador for climate change and put its commitment to reduce carbon emissions by 43 per cent by 2030 into law. 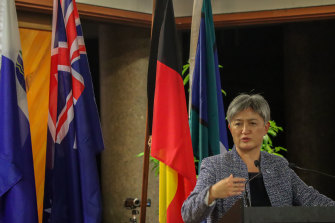 “I understand that climate change is not an abstract threat, but an existential one,” she said. “The triple challenges of climate, COVID and strategic contest will challenge us in new ways”.

In comments directed at Beijing, Wong told the forum that Australia would not impose unsustainable financial burdens. “We are a partner that won’t erode Pacific priorities or institutions,” she said.

She then took a jab at China’s Foreign Minister, Wang Yi, over Beijing’s record on press freedom. 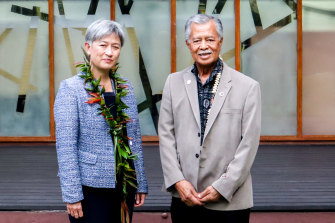 “I hope that you get the opportunity to ask as many questions of the foreign minister when he comes as you get to ask me,” she said.

Wong and Wang both arrived in the Pacific on Thursday as the Chinese foreign minister landed in Solomon Islands for the first time since a security deal with Honiara was signed. Wang said on Thursday that China had “no intention” of building a military base in the Solomons. The draft text of the security deal revealed plans to allow Chinese ships to be serviced and replenished in the Pacific nation. Wang defended the signing of the deal as “above board, with honesty and integrity”.

China’s President Xi Jinping in 2015 pledged to not militarise islands in the South China Sea, an area that has since seen a steady build up of Chinese military infrastructure.

But that assurance has done little to manage Australia’s concerns after revelations on Wednesday that China was seeking to establish a 10-country security and trade deal with the Pacific, a move labelled by the President of the Federated States of Micronesia David Panuelo as “the single-most game-changing proposed agreement in the Pacific in any of our lifetimes”.

“[This will] shift those of us with diplomatic relations with China very close into Beijing’s orbit, intrinsically tying the whole of our economies and societies to them,” Panuelo warned in a May 20 letter first obtained by Reuters to 20 Pacific leaders, including former prime minister Scott Morrison.

The proposal – which includes a clause committing members to not interfering in China’s internal affairs – is due to be debated at a Pacific foreign ministers meeting on May 30. 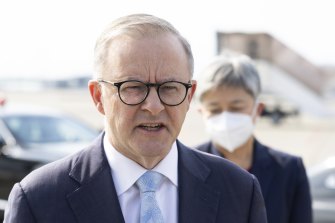 Albanese said Australia had to respond by providing $525 million in extra aid, building climate change resilience programs and ramping up migration programs and security exchange programs with the Pacific.

“We know that this has been building for some time. Australia dropped the ball. We can’t afford to do that. We need to reengage with the region,” he told the ABC on Thursday.

“They are sovereign nations, of course. And we need to respect that. But we need to be offering more support. Otherwise, we can see the consequences of the deal that was done with the Solomons. We know that China sees that as the first of many which is the context of their foreign minister’s visit to the region.”

The Solomon Islands security deal will allow China to protect its infrastructure assets by force less than 2000 kilometres from the Australian coast. Fears spread to Washington on Thursday that a similar proposal could be adopted throughout the Pacific.

State Department spokesman Ned Price said the US was concerned the reported agreements were being negotiated through a rushed and opaque process.

”These recent security agreements have been conducted with little regional consultation, provoking public concern not only in the US but across the Indo-Pacific region,” he said. “We don’t believe that importing security forces from the People’s Republic of China and their methods will help any Pacific Island country.”