Work on delayed £18bn Crossrail project is temporarily suspended in bid to limit spread of coronavirus, Transport for London announces

The £18 billion Crossrail project has been delayed again with work temporarily suspended because of the coronavirus outbreak, Transport for London has announced.

In a statement on Tuesday, it said that all work on TfL and Crossrail sites will be stopped unless they ‘need to continue for operational safety reasons’.

It added: ‘The Government and the Mayor have given clear instructions to stay safe and to stop travelling in all cases other than critical workers making absolutely essential journeys.

‘In line with this, TfL and Crossrail will be bringing all project sites to a temporary safe stop unless they need to continue for operational safety reasons.

‘This means that work on all such projects will be temporarily suspended as soon as it is safe to do so. Essential maintenance of the transport network will, of course, continue.’

It is the latest setback for the project which is now more than three years behind schedule. 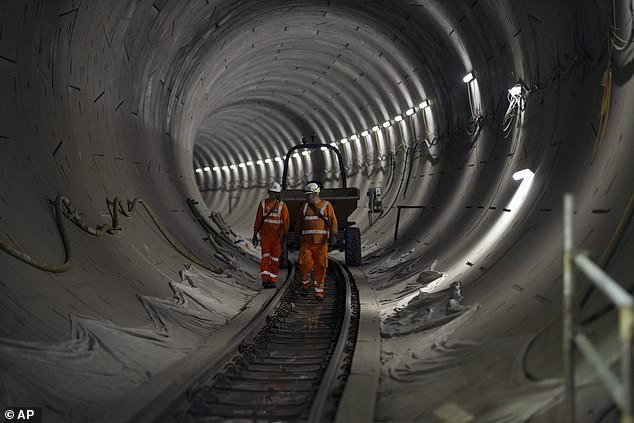 In January, the opening of the project was pushed back  another six months to late 2021.

Transport for London confirmed at the time that that the central London section would not open until Autumn 2021 at the earliest.

It is unclear just how much more it will be delayed by the coronavirus pandemic.

The project, Europe’s biggest ongoing infrastructure scheme, has been cursed with delays and is now estimated to cost more than £18billion.

TfL commissioner Mike Brown told the London Assembly in January that more time was needed to test trains before the scheme, to be called the Elizabeth line, could open.

Once up and running, the line will run from Reading and Heathrow in the west to Shenfield and Abbey Wood in the east.

Stage 4 of the scheme, in which trains coming from Shenfield begin running through the central tunnels, could take place in May 2022.

Meanwhile Stage 5, when trains from Reading/Heathrow come through the central tunnels, could take place in December 2022. 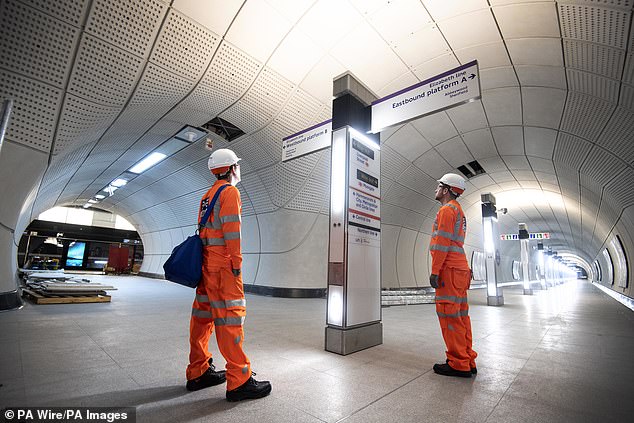 In November, Crossrail chief executive Mark Wild revealed that the cost of the railway could reach £18.25billion.

It would represent an increase of up to £650million on the previous funding total agreed by Mayor Sadiq Khan, the Government and Transport for London.

The railway was initially due to be completed in December 2018, but this date was missed due to a series of problems.

A new plan to open between October 2020 and March 2021 was announced in April. 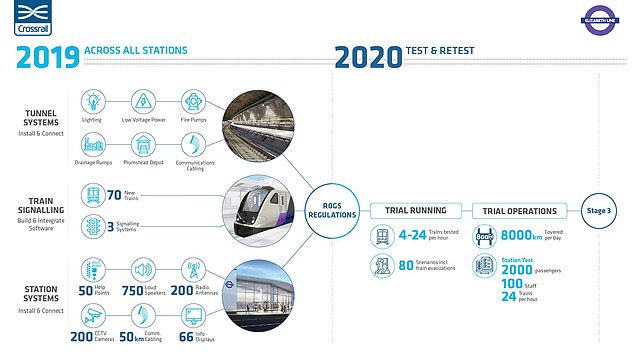 This graphic shows the progress made so far – but the cost  of the railway could reach £18.25 billion

Billed as Europe’s most ambitious infrastructure project, the line running under London was meant to open in December 2018 with significant faster journey times.

But the project – which was first suggested in the 1940s – was delayed before the original launch because of problems with testing and delays to signalling work.

All stations on this section are expected to be in operation on the opening day except for Bond Street, which is delayed because of ‘design and delivery challenges’.

Full services from Reading and Heathrow in the west to Abbey Wood and Shenfield in the east will commence ‘as soon as possible’, according to Crossrail Ltd.

How plans for a Crossrail network go back 78 years

1994: A private bill proposing a new Paddington to Liverpool Street tunnel is rejected by Parliament

2001: The Crossrail scheme is promoted through Cross London Rail Links, a joint venture between Transport for London and the Department for Transport

2008: The Crossrail Act 2008 receives royal assent after being put before Parliament in 2005

2015: The Liverpool Street to Shenfield service operated by Abellio Greater Anglia is transferred to TfL Rail

2017: The first new Crossrail trains are introduced on the Liverpool Street to Shenfield route

2018: Paddington to Heathrow services are transferred from Great Western Railway to TfL Rail