Workers moving to a four-day week have been warned they may face pay cuts as just one per cent of firms admit they would consider allowing staff to receive a full pay packet.

It has emerged in new research by the Chartered Institute of Personnel and Development (CIPD) that a third of companies believe their workers will be on a four-day week within the next 10 years.

But the data has also revealed that it is unlikely the majority of companies will maintain the same pay level for staff when their hours are reduced.

Only one per cent of companies have said that they will maintain staff wages when they move to a shorter week.

Meanwhile, a tenth of firms who have already slashed working days have said they have kept pay the same. 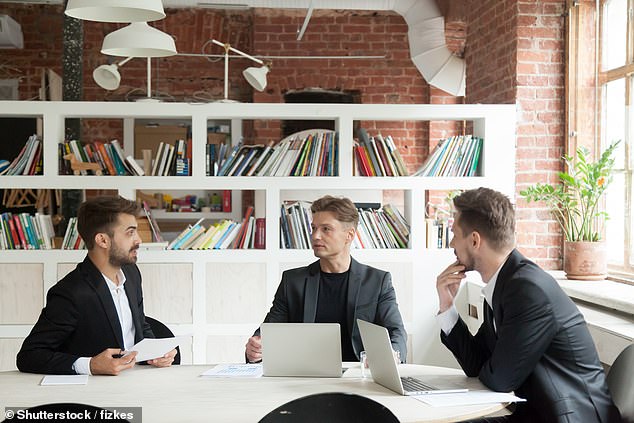 In the research, companies were asked about challenges they faced due to the four day week. Thirty per cent said that the company was not as productive and 32 per cent said it did not suit all of their employees 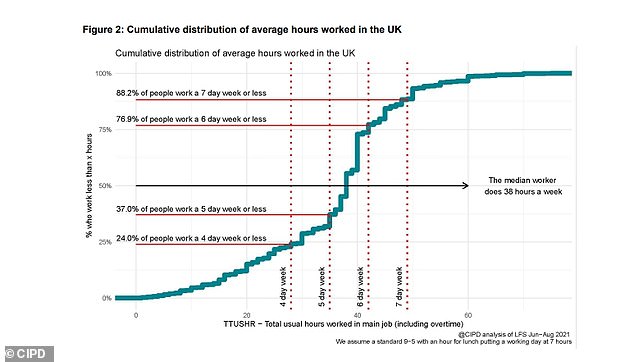 This graph shows the average hours worked in the UK, which is currently 38 in a week

The research also showed that not everyone is on board with the four-day work week including 32 per cent of companies who said it was not viable for their staff.

Elsewhere, 30 per cent said that without the extra day they could not have the same level of productivity and output.

This compared to 31 per cent of staff who said they wanted a four day week.

The idea of a four-day working week has become more popular in recent years.

It is a notion that has been tested by countries and companies seeking to see if it could work for them.

However, concerns remain that although staff could be more productive, output losses will be not be offset.

Speaking to the Telegraph, Jonathan Boys, economist at the CIPD said: ‘The major sticking point is the need to increase productivity by a whopping 25pc to make up for the output lost from fewer days of work.

‘This point came through in our findings with a majority of employers saying they would need to work smarter and adopt new technology in order to reduce working hours without cutting pay.’

The research also showed that not everyone is on board with the four-day work week including 32 per cent of companies who said it would not be viable for their staff.

Despite voicing some positivity over the potential for more companies to implement the reduced working hours, Mr Boys said that the cost of living crisis could mean  that people may end up working more hours so that they can supplement their income.

The new data comes after a 4 Day Week campaign trial. A large proportion (86 per cent) of the 70 companies involved in the six-month experiment voted to keep the four-day week.