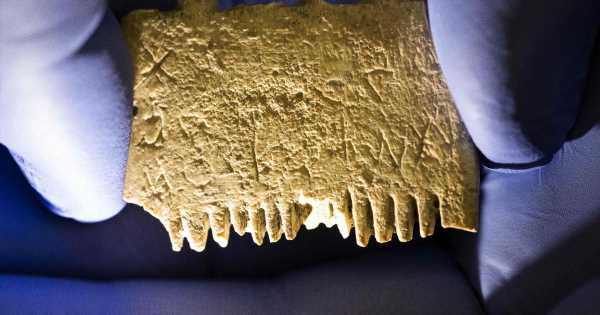 What is thought to be the world’s oldest written sentence has been discovered, and it talks about head and beard lice.

The script is written in the planet’s oldest-known alphabet – but its message is one that is still relevant for parents today.

The ancient text is inscribed on a comb, a luxury item for the bronze age Canaanite thought to have owned it.

According to the Guardian, the ancient message is thought to say: “May this tusk root out the lice of the hair and the beard.”

It also proves that lice have been a problem for thousands of years, with 14 teeth narrowly spaced teeth designed to remove them and their eggs found on one side.

Six spaced-out, worn-down teeth designed to tease out knots were found on the other.

It is believed to be from the old Kingdom of Judah, in Lachish, a Canaanite city-state. Despite it being discovered in 2017, the words themselves were only found in December.

The words have now been determined to be Canaanite script, which is the world’s oldest alphabet, believed to be around 3,800 years old.

The society existed in the second Millennium BC and was the second most important city in the wider kingdom, now in modern-day Israel.

An archaeologist at the Hebrew University of Jerusalem, Professor Yosef Garfinkel, was part of the direction of the excavations.

He told the Guardian: “You have a comb and on the comb you have a wish to destroy lice on the hair and beard.

“Nowadays we have all these sprays and modern medicines and poisons.

“In the past they didn’t have those.”

The find is thought to be an item of the wealthy, measuring around 3.5cm by 2.5cm.

Researchers have tried to carry out carbon dating onit to determine its exact age but have had no luck.

It is currently thought to have been crafted in around 1,700BC, with microscope studies reported to have detected the hard-wearing outer membranes of tiny nymph head lice.