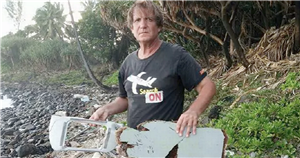 An investigator who found the first piece of debris from missing plane MH370 said he was bombarded with death threats and followed by "shadowy figures" as he continued his search for the doomed jet.

Wreck hunter, Blaine Gibson was at first joined by devastated families as he combed the beaches of Madagascar looking for the Malaysian Airlines flight to Beijing.

It disappeared after departing Kuala Lumpur airport in Malaysia for Beijing, China, in March 2014 with 239 passengers on board.

But soon afterwards, he was left feeling "disturbed and intimidated" by people telling him to give up the search and a fear that he was being watched.

The Australian describes his plight in a new Channel 5 documentary called MH370: The Vanishing.

In it, Blaine said he feared "someone who was trying to prevent Malaysia MH370 from being found might take violent action against me… but I didn’t know who," reports The Sun.

He added: “I started to get death threats from anonymous people. Things like ‘No plane, no Blaine’ and telling me to give up my search.

“One made a call to a friend of mine saying I would not leave Madagascar alive.

“I was being followed and I was being photographed and, yes, it’s very disturbing. It’s intimidating.”

The documentary examines the mysterious disappearance of the plane, which suddenly changed course and fell off the radar after signing off from Malaysian air traffic control.

It had 227 passengers from 14 different countries, as well as 12 crew members, on board.

In 2015, part of a Boeing 777 wing was discovered in Réunion Island, a French department in the Southern Indian Ocean and Blaine decided to search areas of Madagascar and Mozambique on expert advice.

In June 2016, three more pieces were found and using hi-tech, driverless probes, investigators searched 12km sq per day to depths of 6000m, but were called off after finding nothing for 138 days.

Around the same time Blaine said he started receiving death threats, Ghyslain Wattrelos – who lost wife Laurence, 51, and two of their three children, Hadrien, 17, and Ambre, 13, in the disaster – says he was contacted by thousands offering to help him find the truth – but believes some had sinister motives.

He started to believe the Malaysian authorities or the Chinese were covering up the true position of the likely crash, as they didn’t want the plane found.

“Somewhere in this world someone knows what happened and it’s not just one person, It’s a big story. It’s a dirty story and it involves many countries,” he said.

No official explanation for the plane's disappearance has ever been given despite an official investigation by Malaysia's government, and it remains one of the world's greatest aviation mysteries.

One of the leading theories was a mass murder-suicide by the pilot – 53-year-old Zaharie Ahmad Shah.