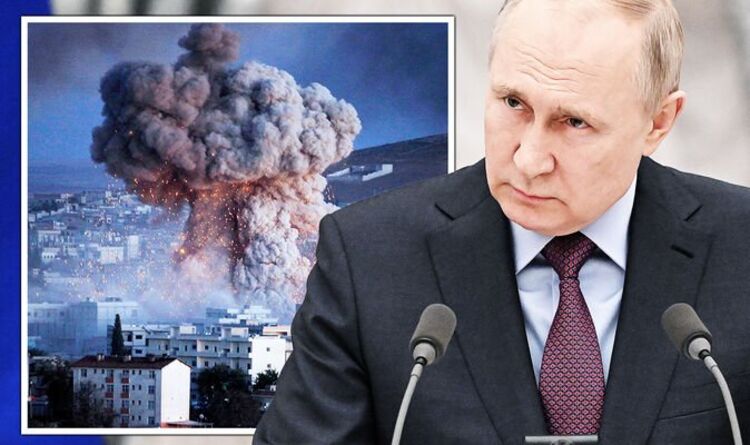 General Sir Mike Jackson, who led the army during the allied invasion of Iraq in 2003, made the startling comments on the Alastair Stewart and Friends show on GB News. When asked is the if we are facing the prospect of World War 3 over Russia’s invasion of Ukraine, he said it couldn’t be ruled out, adding “the situation is very delicate in terms of east/west and its future”. Sir Mike warned the whole world is currently in “uncharted territory” and suggested Russia’s actions means the risk of nuclear weapons being deployed had potentially increased.

Questioned over the possibility of World War 3, he replied: “I can’t rule that out – I find it very hard to say.

“In all honesty, it cannot be ruled out.

“The situation is very delicate in terms of East/West and its future.”

Both Russia and key members of the NATO defence alliance, including the UK and US, possess nuclear missiles.

The former British Army chief was asked during his interview on GB News if we would find ourselves in a World War 3 scenario if Vladimir Putin responds to a no-fly zone with the use of such weapons.

“Thank God, we haven;t seen nuclear weapons used since 1945 and we have survived that long without further use.

“I honestly don’t have the confidence to say we can survive the next two-thirds of a century without such use.”

Sir Mike also told the GB News programme Boris Johnson should continue to “play the long game” during the conflict in Ukraine.

He backed recent arguments from the Prime Minister that Britain not get involved directly in the conflict between Russia and its neighbour amid growing calls by Ukrainians for NATO to police a no-fly zone.

The EX-British Army boss said: “Strategically we have to continue on the road we have now set out to assist Ukraine, short of offering military presence in the air or the ground.

“I am content with that argument. We have to continue ostracising Vladimir Putin while remembering our dispute isn’t with the Russian people.

“They, in the long term, are in as much danger from Putin as the rest of the world. We must play it long.

“Old points of contention in the West, socially, politically, should now be overshadowed by the strategic importance of getting this right.”

Earlier on Monday, fears over increased Russian aggression surged once more after Ukraine rejected an ultimatum for people in Mariupol to surrender.

Ukraine’s Deputy Prime Minister Iryna Vereshchuk said the country has “of course” rejected the ultimatum and said the situation in the besieged city was “very difficult”.

She said: “There can be no question of any surrender, laying down of arms,” according to the Ukrainska Pravda news portal.

“We have already informed the Russian side about this.”

But elsewhere, British intelligence said on Monday Russian forces advancing on the Ukraine capital Kyiv from the northeast have stalled.

Russian sells crashed into houses and a shopping district in Kyiv’s Podil district on Sunday night killing at least four people, according to city authorities.

Ukrainian and Western powers have believe Russian ground forces have made little progress over the past week, concentrating their efforts on artillery and missile strikes – often into urban centres.

British intelligence said the majority of Russian forces are still 15 miles from the centre of Kyiv.

“Forces advancing from the direction of Hostomel to the northwest have been repulsed by fierce Ukrainian resistance.”