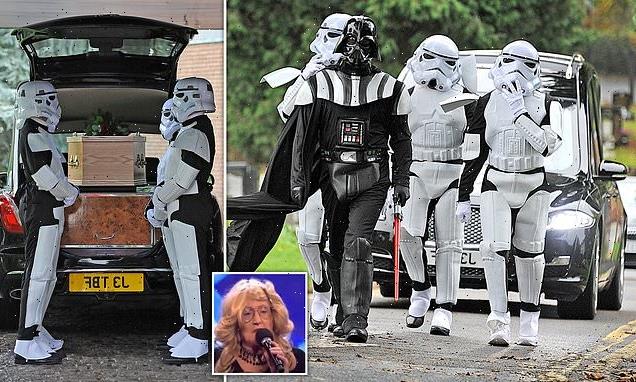 Grandmother, 78, booted off X-Factor by Simon Cowell is laid to rest in Star Wars-themed funeral by undertakers dressed as Darth Vader and Stormtroopers

A grandmother who was booted off X-Factor by Simon Cowell has been laid to rest at a Star Wars themed funeral by undertakers dressed as Darth Vader and Stormtroopers in Worcestershire.

Brenda Morris, 78, shot to fame following her flamboyant performance of Pink’s So What on the ITV talent show in 2010.

She told judges Louis Walsh, Dannii Minogue, Cheryl and Simon that ‘I think I could win the X-Factor’.

However, the retired chemistry lecturer was kicked off stage just seconds into her gravelly audition after being told: ‘We’ve already got a Kylie’.

Eleven years later, she said her final wish was for a Star Wars funeral after being informed she could not donate her body to medical science. 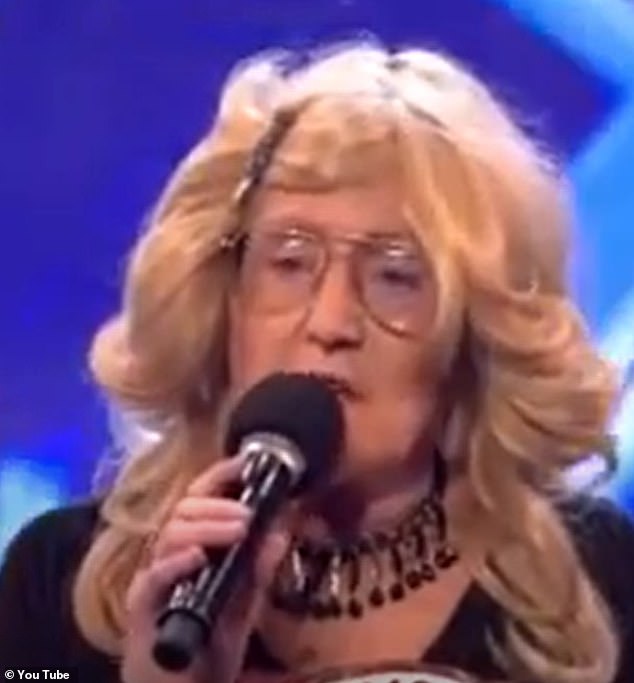 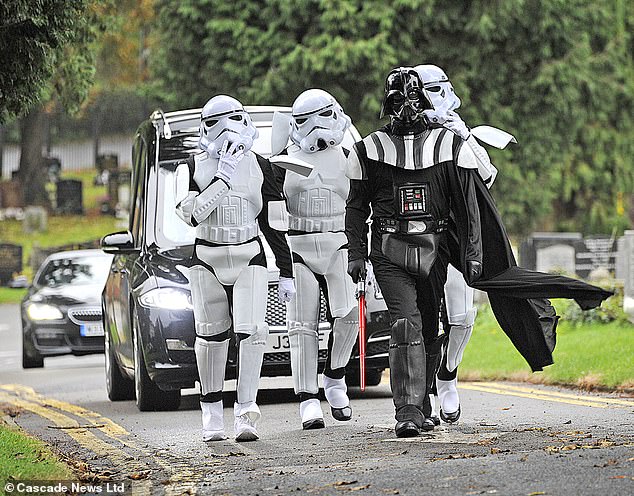 Brenda told relatives she did not want a slow, traditional funeral procession, instead preferring something ‘out of this world’.

More than 100 people turned out for the funeral in Redditch to say their farewell, despite efforts to keep the occasion under wraps.

Mark Thomas, of funeral directors Thomas Brothers and who took the role of Darth Vader at the ceremony, described the occasion as ‘quite the spectacle’.

He said: ‘She decided when the time came that she wanted us to dress up as Star Wars characters. 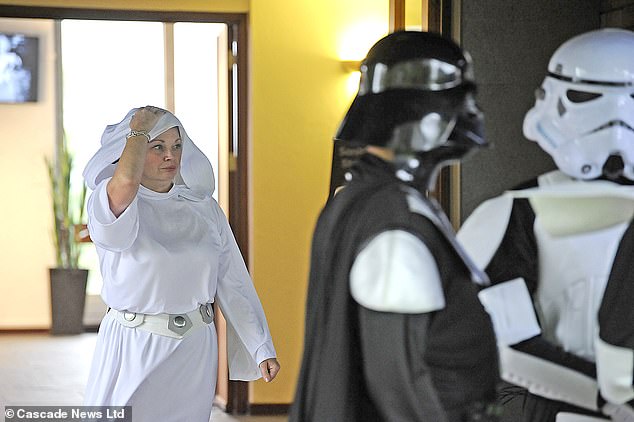 Brenda, described as having ‘a huge personality’, told relatives she wanted a funeral that was something ‘out of this world’. 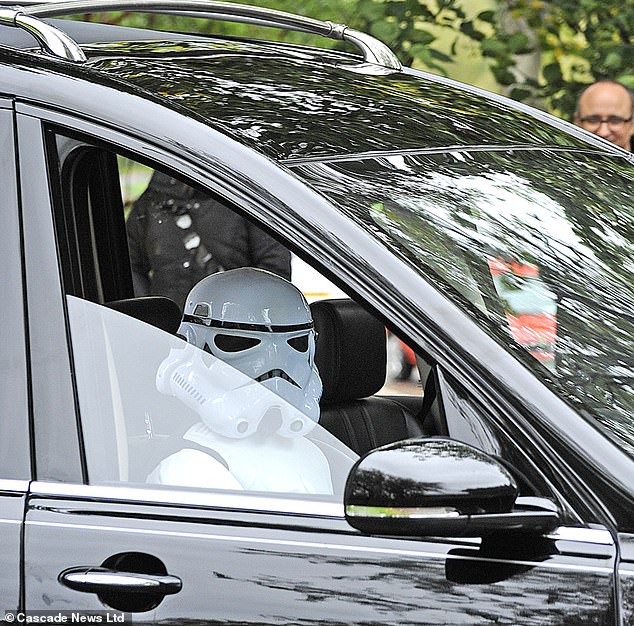 The hearse driver also dressed as a Stormtrooper, with the funeral directors helping to put on ‘quite the spectacle’

‘I personally knew Brenda. She had such a huge personality and was a big part of the community.

‘We bought the costumes through the internet and did a dress rehearsal so we got everything right.

‘I know it may sound strange, but I watched some clips of Darth Vader just to make sure I got everything right.

‘The lads stood around the coffin dressed as stormtroopers while I was by the celebrant. It was quite a spectacle.’

Brenda’s personality attracted many fans, despite her short-lived singing career.

She had already performed These Boots Were Made for Walking while wearing three-inch spiked heels shortly after a knee replacement. 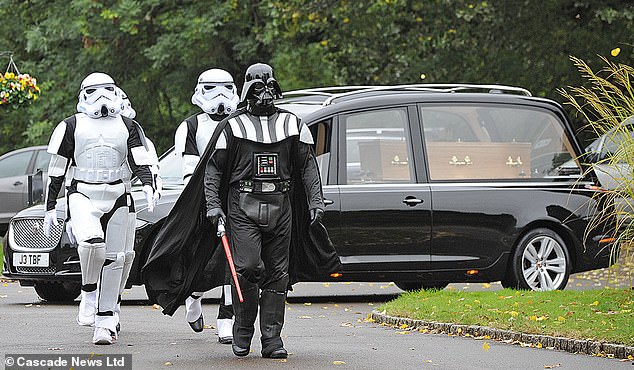 Mark Thomas, of funeral directors Thomas Brothers, took up the role of Darth Vader and even carried a light sabre 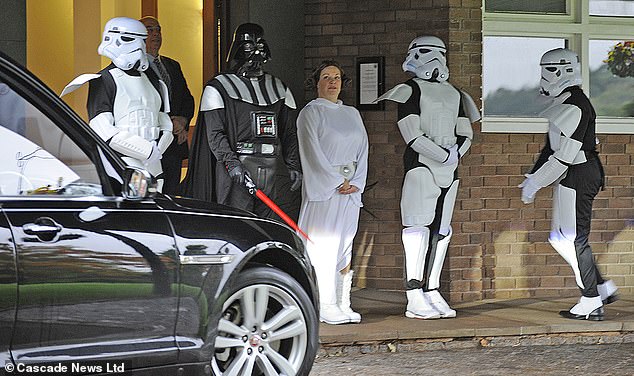 Darth Vader, Stormtroopers and Princess Leia line the hearse to pay their respects to the retired lecturer 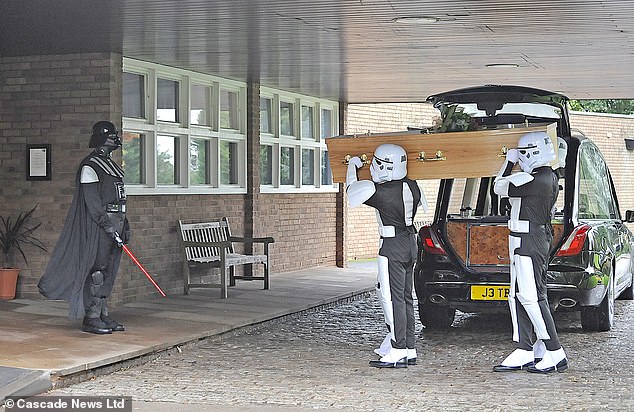 When Cowell wished her luck before her audition, she quipped: ‘I think I’m going to need it with these boots on.’

Brenda also appeared on Britain’s Got Talent the previous year.

Mark added: ‘She wanted to go fast down the highway to the crematorium, and although we stuck to the speed limit we were there in about two minutes.’