New York: When a civil war in Yemen erupted more than three years ago, it fractured what was already the poorest Arab nation and eventually plunged it into the planet's worst humanitarian disaster. 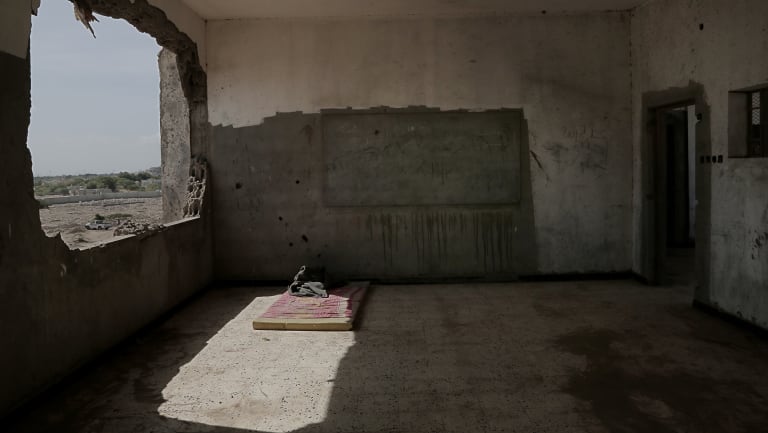 War damage inside a classroom of a school now turned into a camp for displaced persons in Khanfar, Abyan, Yemen.

While the world has turned its gaze away from the prolonged conflict, it has ground on without easing. It has also grown increasingly complex.

An assault by the Saudi-led coalition that has been battling Iran-backed Yemeni rebels for more than three years began on Wednesday on the city of Hodeida, which has a port that serves as a vital supply route for humanitarian aid and other supplies to the bulk of Yemen's population. It marked the latest turn in a situation moving toward catastrophe for millions of civilians. 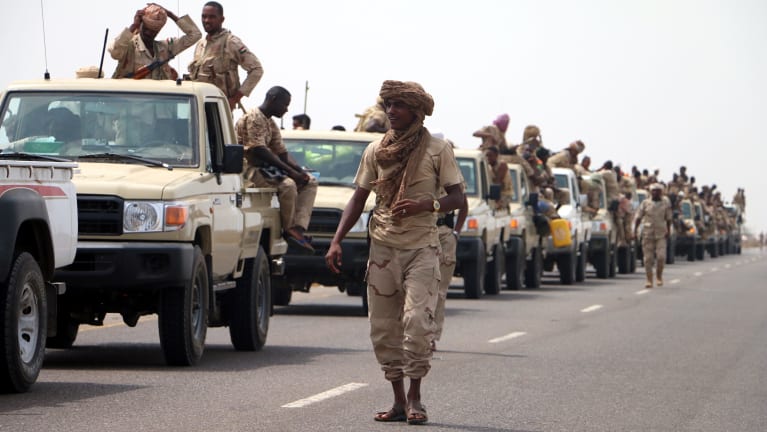 Sudanese forces fighting alongside the Saudi-led coalition in Yemen gather near the outskirts of the western port city of Hodeidah on Tuesday.

Who are the main parties to the conflict?

The conflict began as a fight between armed Houthi rebels from the north of the country and the government, then led by President Abed Rabbo Mansour Hadi. The Houthis are part of the Shiite Muslim minority in Yemen.

Saudi Arabia and its neighbour and close ally, the United Arab Emirates, intervened in 2015 because of perceived Iranian support for the rebels. The Sunni Muslim monarchy of Saudi Arabia and Shiite Iran are rivals for power and influence across the Middle East, and Yemen has become a battlefield for one of the proxy wars between them.

Iran has denied supporting the Houthis, but Iranian-made missile have been used by the group during the war.

The conflict has carved the country up into Houthi-controlled zones in much of the north-east, including the capital, Sanaa, and large parts of the south and west controlled by pro-government Saudi-led coalition forces. 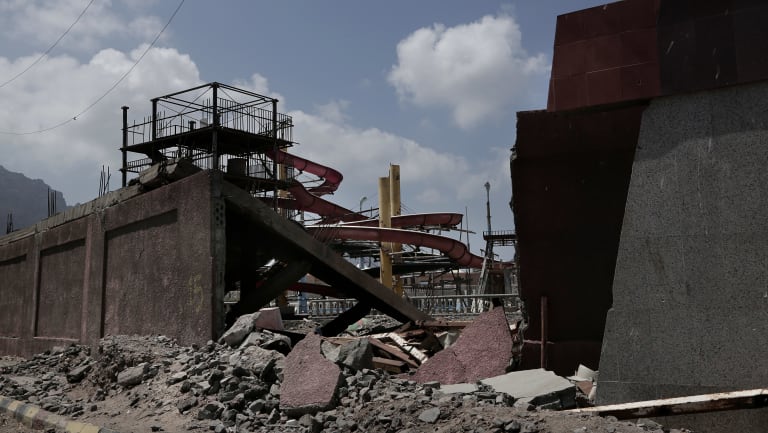 A destroyed theme park in Aden, Yemen. The mood is eerie on the mostly empty streets of Aden, Yemen’s southern port city and designated seat of government.

How did Yemen's conflict reach this point?

The conflict has its roots in Yemen's Arab Spring uprising that began in 2011 and forced the long-time authoritarian president, Ali Abdullah Saleh, an ally of the United States, from power. Though Saleh had led a unified Yemen since the 1990s, competing interests loosened his grip on the nation. Al-Qaeda in the Arabian Peninsula, one of the most potent offshoots of the global terrorist network, thrived in large parts of the country, and Houthi rebels gained power in the north.

Then, months after the Arab Spring protests began, Saleh handed leadership of Yemen to his deputy, Hadi, and stepped down. But Hadi struggled to control a nation already deeply divided, and Saleh continued to wield power by aligning with the Houthis.

By 2014, the Houthis and their supporters — including sections of the Yemeni military loyal to Saleh — stormed the capital and forced Hadi and his internationally recognised government into exile in Saudi Arabia.

Saudi Arabia and several allied Arab states including the Emirates, intervened in 2015. Backed by the United States and Western allies, they launched air strikes on Houthi forces and drastically escalated the conflict. The Houthis responded by firing missiles into Saudi territory.

Civilians, mostly those in Houthi areas, were increasingly caught in the crossfire. Then Saleh was killed by Houthis late last year after he abruptly abandoned the alliance with them. 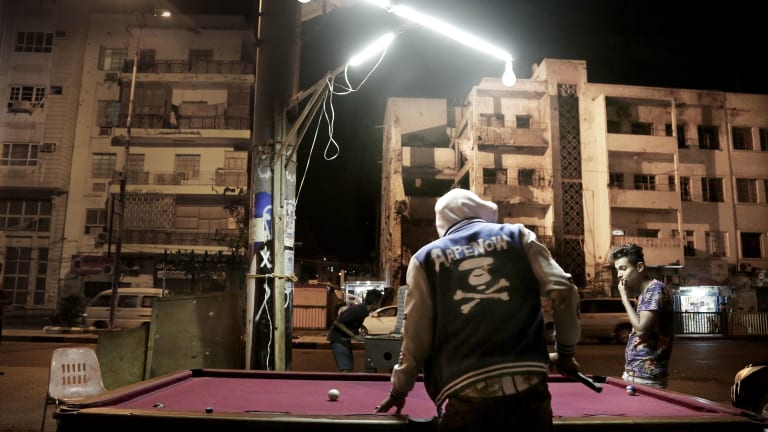 Young people play pool on a street in front of damaged buildings in Aden.

What is the importance of Hodeida?

For millions under Houthi control, the Red Sea port of Hodeida is the only supply route for humanitarian aid — including food and medicine — and other vital supplies. An estimated two-thirds of the population relies on it.

The city is home to about 400,000 people, and with just two main routes in and out, a prolonged siege could leave hundreds of thousands cut off, unable to flee. Many aid groups pulled staff members out of the city in anticipation of the battle.

Wednesday's offensive was carried out by Yemeni troops, aided by several other nationalities including Sudanese, trained and funded by the UAE. Both the Emiratis and the Saudis have accused the Houthis of using the city to smuggle Iranian weapons into Yemen. United Nations monitors say it's unlikely that weapons are being smuggled through Red Sea ports, and are most likely coming across land borders. 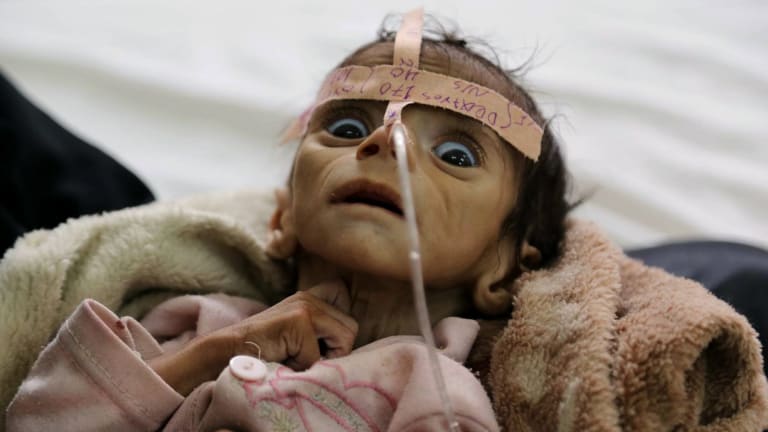 A humanitarian crisis threatens to worsen

The United Nations and aid agencies have warned that an attack on Hodeida could exacerbate an already out-of-control humanitarian crisis and called for a ceasefire.

"They must act now to secure a ceasefire before the people in Hodeida city suffer the same fate as those in Aleppo, Mosul or Raqqa," David Miliband, president and chief executive officer of the International Rescue Committee, said in an email statement, likening the potential outcome to long-term sieges in Syria and Iraq.

Relentless air strikes have already shattered the infrastructure in many Houthi-controlled areas, with bombings damaging hospitals and sewage facilities. 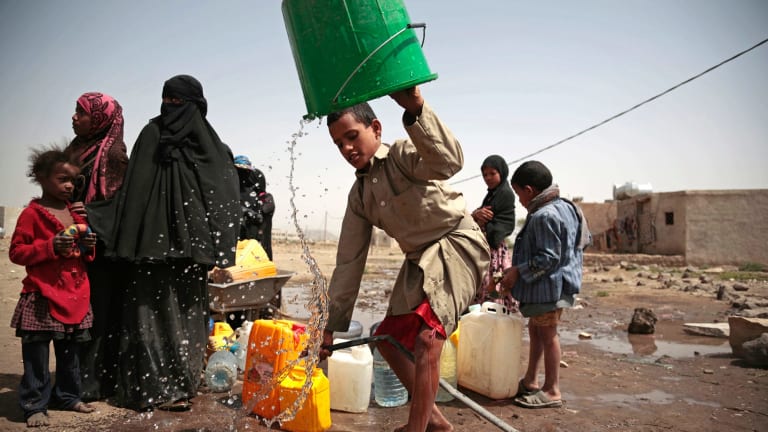 A boy rinses a bucket as he and others collect water in war-torn Yemen.

Preventable diseases have run rampant. A 2017 cholera epidemic in Yemen was the largest and fastest outbreak of the disease on record.

The United Nations has said both the Saudi-led coalition and the Houthis have carried out actions that could amount to war crimes, and both sides have been accused of intentionally targeting dozens of hospitals and healthcare facilities as well as civilian centres.

Even before the most recent offensive, millions of Yemenis were teetering on the brink of famine, with an estimated 60 per cent of the population of 29.3 million categorised as food insecure, according to the World Food Program.

After years of war, 8 million of Yemen's estimated 28 million people are at risk of starvation, according to the United Nations and aid agencies. 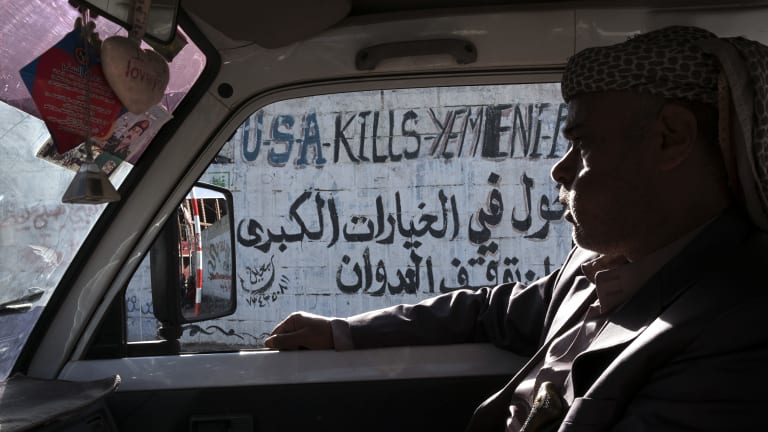 Anti-American graffiti on the street in Sanaa after the war started in 2015.

The International Committee of the Red Cross said that it had stockpiled food, medicine and water purification systems in the area in anticipation of the battle, but that the aid could not be distributed while fighting is underway.

"Real people, real families, will suffer if no food is getting in, and we are concerned that ongoing military operations continue to hamper the arrival of essential goods," said Robert Mardini, the regional director the International Committee of the Red Cross.

Saudi Crown Prince Mohammed bin Salman has been sharply criticised for the decision to carry out an air war in Yemen, keeping Saudi casualties low but killing thousands of Yemeni civilians and distroying infrastructure.

The stalemate with the Houthis, and the lack of a clear strategy or exit plan, have raised questions about whether Salman and his ally, Emirati Crown Prince Mohammed bin Zayed, have locked their nations in a costly and unwinnable conflict.

The assault on Hodeida appears to be their effort to break the logjam and gain an upper hand in peace negotiations.

But experts say that even a victory in Hodeida is unlikely to significantly alter the underlying dynamic in Yemen. The Houthis still control the capital, Sanaa, as well as territory in northern Yemen, their ancestral lands.

The United States has backed the Saudi-led coalition, but USmilitary officials, including DefenCe Secretary Jim Mattis, have warned their Arab allies that the assault could end in failure both militarily and politically, and result in further civilian suffering.